Castle Quote
This policy of no taxes is the least we could expect.
Brewer
Stronghold
Site Search
Game Navigation
Newest Gallery Images

A Tale of Two Cities 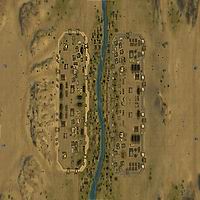 The Tale of Two Cities

The river ran clear and calm, feeding water to the rich farmland on its banks. The two cities have lived peacefully side by side for many years, farming, trading and growing.

But then the lords arrived in the mountains, claiming their birthrights and seeking to establish their hold of power. And that's when it all started ...

This map was a joined project by Lord Vetka and Nigel.

It is mainly designed for multiplayer skirmish games. The players have fairly small starting estates - big enough to build an interesting castle, but not so big, that they can hold a huge economy. The lords will depend on taking control of their city to get large amounts of supplies.

For a 1v1 it should be quite straight forward. For a 2v2 game each city is made up of 2 villages and it is up to the allied players if they want to take one each, or if one lord takes the whole city and the other plays a supporting role.

The map gets an evil twist if it is played as a 4 player free-for-all game without teams. In that case, the two players on the same side of the river will be immediate enemies and race for control of their city. Finally the two survivors will battle it out between them.

Nice idea for sure. Looks awesome.