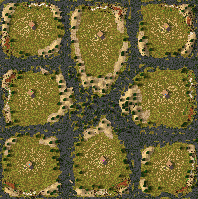 Marshes divide eight castle lords. Each has more or less enough space and enough resources to grow strong (but not to much resources), so you may have a great fight! This map might also be pretty interesting for multiplayer games, as the map is pretty much balanced.

This map was created after Stronghold Crusader map The Wet Lands which I like to play online and in skirmish mode, as players cannot attack their walls to the edge of the map because of the marsh, and iron is in the middle so players would have to fight for it. Nevertheless, I didn't put iron in the middle in my map, but each player has less stone and some iron on his own island. Also, more islands one player controls, more resources he has.