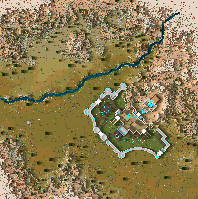 Author's Notes: Originally created in May 2, 2014, I haven't had much free time to work on this map. It was originally created to be a larger city in the midst of a siege, but I liked this result more. You will be especially limited for most of the fight, allowed only archers, spearmen, and crossbowmen to be recruited. A squad of Illesquian knights and archers have already been dispatched to the castle ahead of the army. An engineers' guild is available to create engineers and shields, but no replacements may be constructed. No economic issues should arise unless the enemy has broken through the outer barriers. Additionally, no beneficial or detrimental events have been added to the map. This is solely a defensive mission.

The story was not meant to be in depth. Rather, it was just something to read if you are not one of those people who like to just jump into the game and play. Compared to some previous single-map stories that I've created, this one should be different primarily because it's not simply a description of the castle.

As far as difficulty is concerned, I was the sole playtester for the map. And because I knew where everything was and everything that would happen, I could react immediately to any situation. So "Normal" is all I will ever put for any uploaded maps.