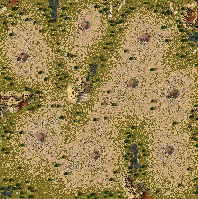 I made this map so I could fight as much AI opponents as possible (with one ally or alone). The idea was for me and an ally to take the two positions in the southwest, and to fight all other opponents, while AI lords start with 40000 gold.

The southern position is a bit harder, as it is harder to get stone and iron, but you have enough wood and oasis there, so it is not impossible. Once you kill the enemy in southeast, you get iron. As about the stone - you nearest stone is in the center of the map, where will be hard to get stone from.

The position in southwest is easier - there you can build stone quarries and iron mines near the hill, while you can also send your troops on the hill, to defend your workers, but also as a point from which you can attack the enemy north of you.