Here we are at last! The final Trail mission in Stronghold Legends awaits us, and this is by no means an easy feat. Three opponents lay before you namely Vlad to your right, Dietrich straight ahead and Beowulf on your left. With no existing defence it's pretty obvious that Vlad should be tackled first - and he doesn't create a one later either. Before this however, you need to move quickly to get an efficient economy (and army) ready.

Begin by placing your Stockpile next to the Iron deposit within your estate. With no high amount of gold, Iron needs to become your most valuable resource. Secondly, place your Granary further right than your Stockpile, closer to the edge of the map. Now you have these buildings placed, place two Iron Mines and an ox tether. From here, place two Wood Camps and a Hovel. Now place an Apple Farm near your Granary.

Your next priority should be your defence. Begin by placing your Barracks next to the entrance to your estate, your Armoury near your Stockpile. With the remaining Stone you have available, construct a simple wall that runs from your Barracks to both edges of your estate through the trees. It's important to do this because enemy units will otherwise be able to filter through the trees if you don't. You may find going into Architect mode helps you place your wall effectively here. 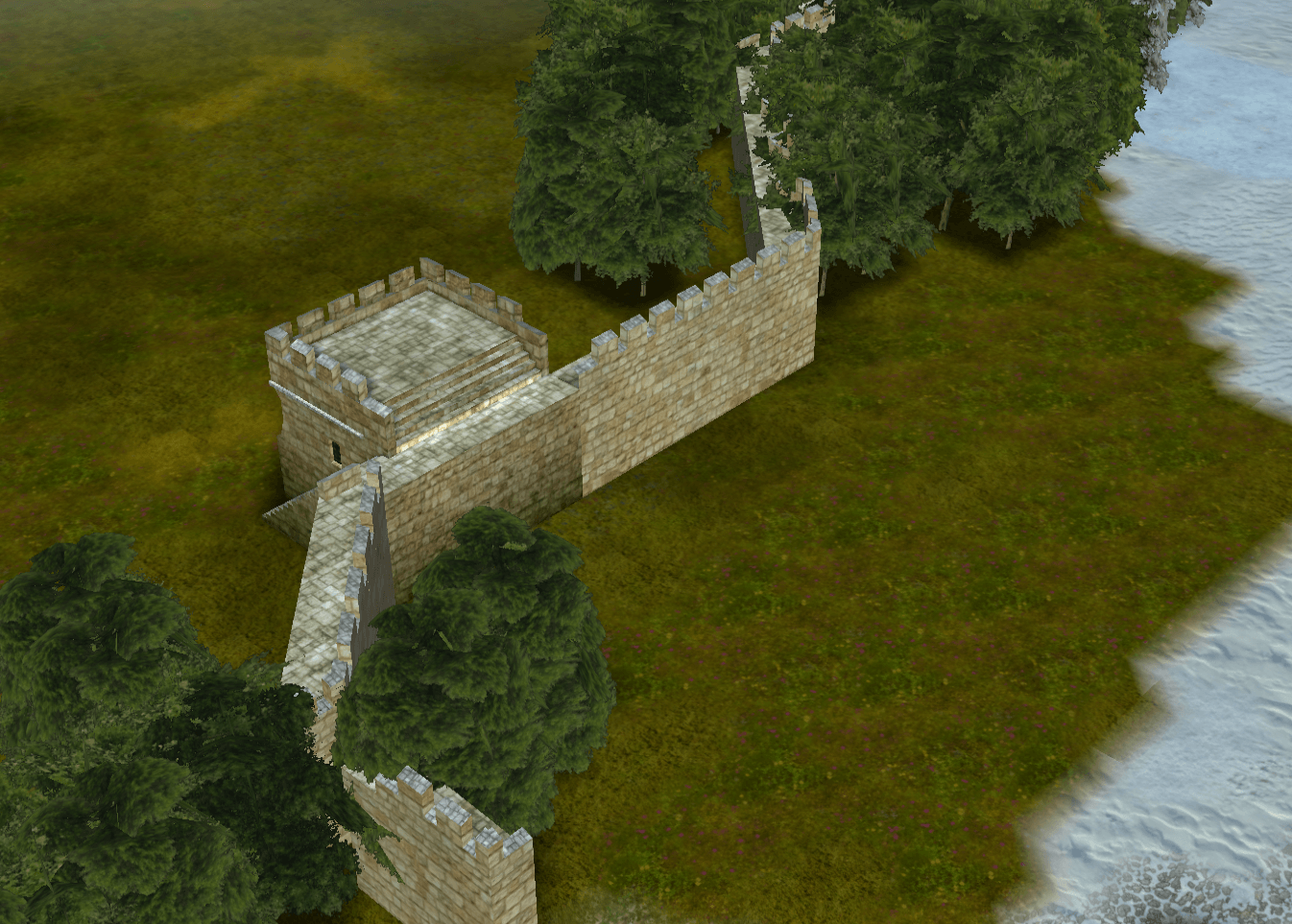 Tip: You will know if you build the wall correctly so that no units can enter your estate, because the periodic attacks from Beowulf and Dietrich of the various "shock troops" to destroy your buildings won't take place. In fact you're likely to hear very little from Dietrich at all and the only attacks you will probably receive are Sieges from Beowulf and Vlad at first.

Purchase another 20 bows, and recruit as many as possible of the now 40 Archers available to you. Immediately station them on your new wall, and at the same time set your tax level to Normal and your ration level to Extra. Now sell all Candles, Hops and Ale from your Stockpile and use these resources to purchase the remaining amount of Archers. These will defend the initial attacks but you still need to keep moving.

Place two Chicken Farms, two Dairy Farms, another Apple Farm, another two Hovels and another Wood Camp. This will keep your industry going nicely for a while, so you can now turn your attention to production. When resources allow place another two Iron Mines and sell all the existing Iron in your Stockpile. Use this gold to purchase another 10 bows, recruit these Archers and add them to your defence. Keep doing this every time Iron arrives in your Stockpile - just don't forget to recruit the Pikemen available to you and station them on your wall alongside your Archers.

Next, increase your food production again. Place one or two more Apple Farms, Chicken Farms and Dairy Farms, but switch to exclusively placing the smaller Chicken and Dairy Farms instead from now on. You don't have the space to be placing so many large buildings in your estate all the time. After this, place a Pantry and a couple of Pig Farms to start generating some Honour. By now, you should have a nice thriving estate: 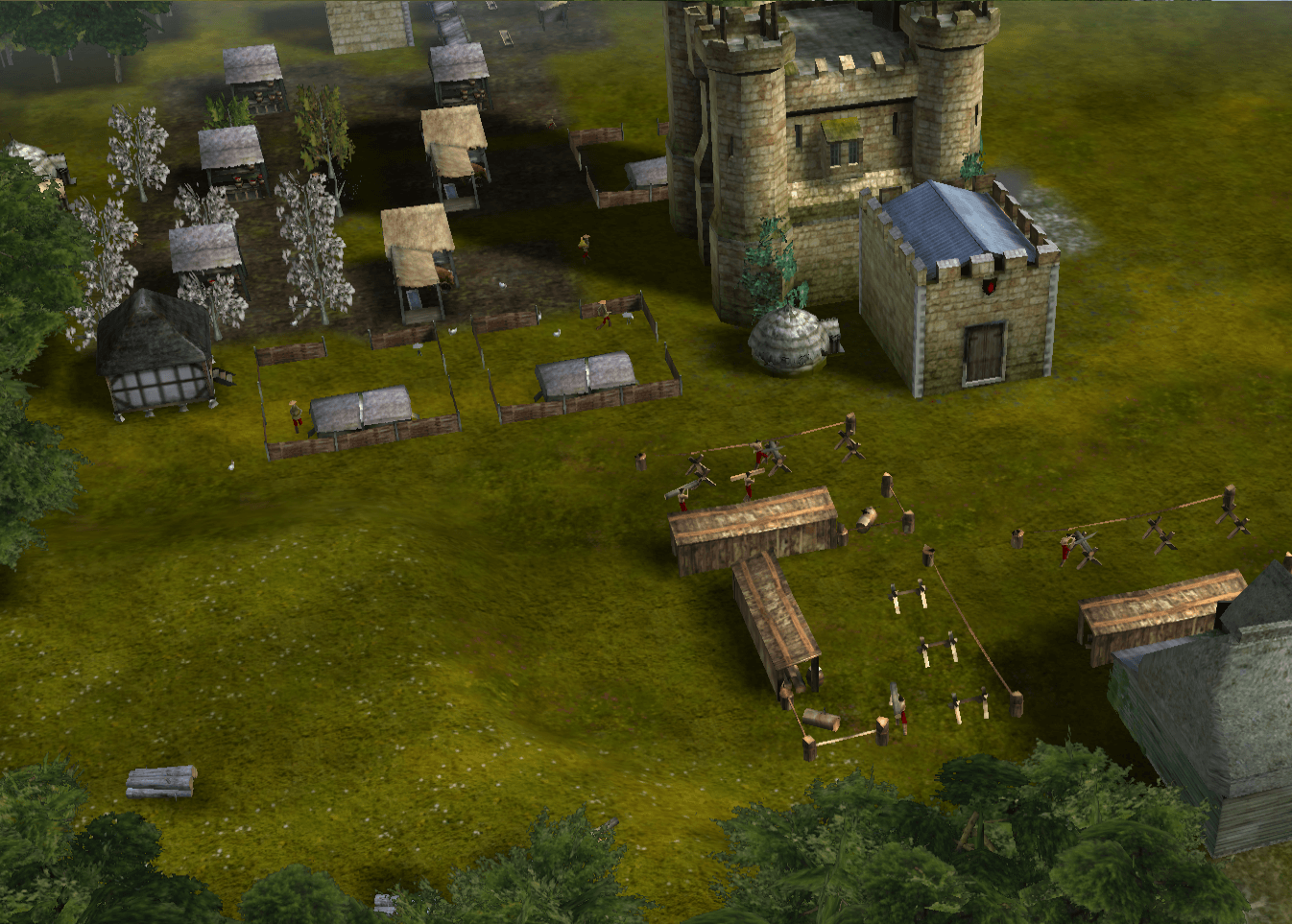 And just in time to put your defences to the test, any moment now Beowulf should launch an attack, followed by some Vampiric Creepers from Vlad - although these will arrive first. If you've followed the instructions so far, there's not really a lot to be worried about. Ensure that your Pikemen are all placed on aggressive stance, well spread out on top of the walls, and the Vampiric Creepers will soon be slain before they can convert any of your Archers.

By this point Beowulf's Siege will arrive, and you should easily take care of this. However this will probably coincide with another Siege from Vlad. Neither are difficult but you will need to keep your wits about you. You can also bring Arthur up to your wall, and use his power to summon knights on the other side of your wall. This will ensure the invasions do even less damage. 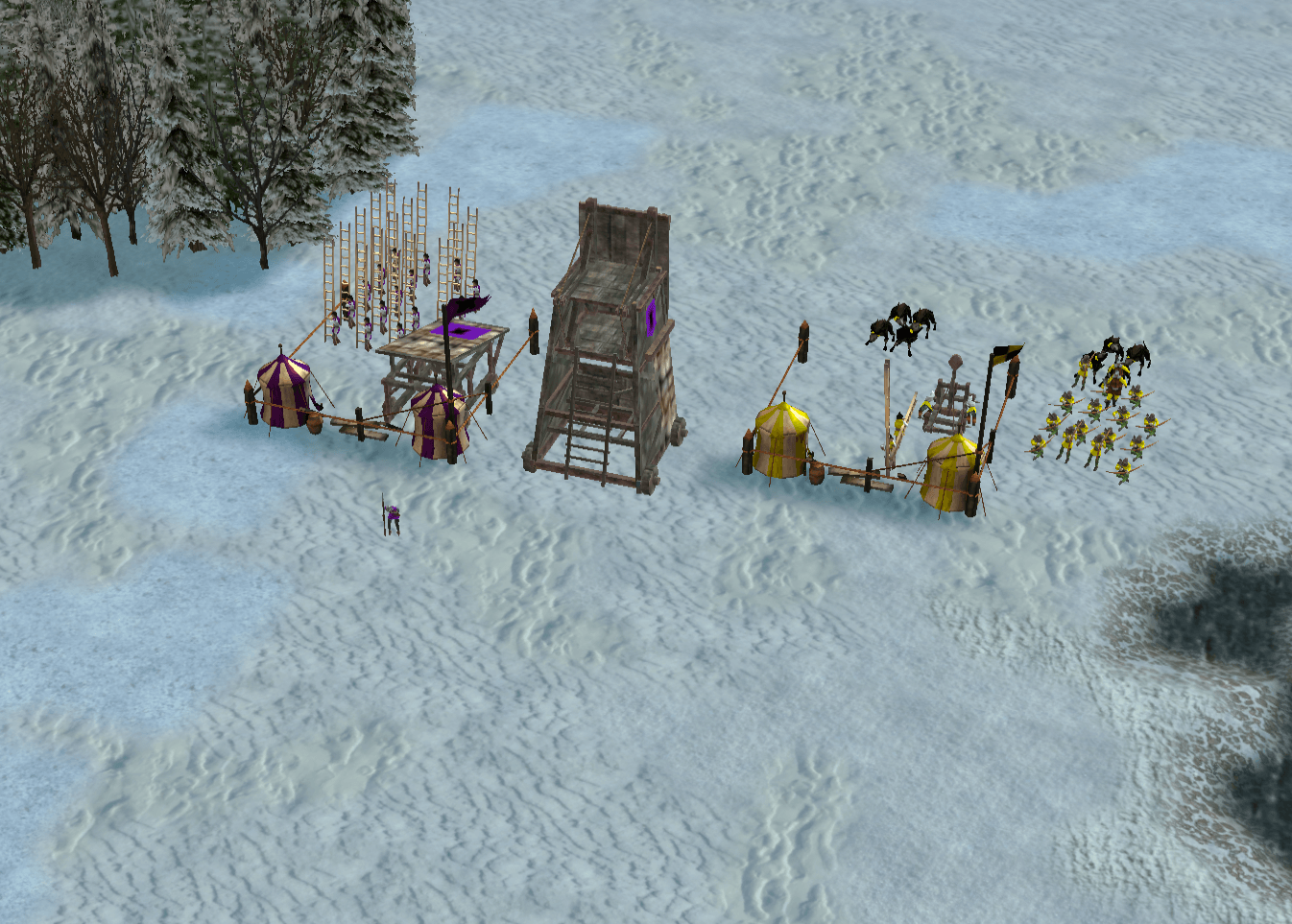 Back to your estate and make sure you place as many Iron Mines as your estate physically allows, place another Ox Tether and Hovel. Place another two Dairy Farms to keep your food supply strong and then turn back to your defence again. You should probably start constructing a better defence now. Start by placing two Stone Quarries and another ox tether. By this point you should have a good income of Iron so you can afford to purchase 10 Crossbows and Leather Armour and recruit some crossbowmen to help with your wall.

By this point at least one Lord, possibly two, will have either prepared a Dragon egg or have one completed. It's just a matter of time until they hatch it, so make sure you have enough stone to place an Engine Tower in your estate (preferably just behind your wall) then equip it with a Dragon Harpoon. Two would be better if you have the resources. Purchase the stone if necessary in the short term, but it's important to get this built quickly.

I'm pleased to say that if you can make it past this stage, then that is as difficult as this mission will get. From now on it's all about building up a force strong enough to take on your opponents one at a time. The invasions from Vlad and Beowulf will constantly coincide with each other, so the quicker you deal with one of them, the easier it becomes.

For this stage, begin by placing a Round Table in your estate. You can immediately recruit Merlin and send him to help with your defence, and some of these units may come in useful later. For now however, focus on recruiting a group of 60 Pikemen and keep them to one side away from your wall. You want to attack Vlad during Sieges and for the best moment, time it just after one of his sieges have taken place - he will be at his weakest at that point. A couple of Knights from the Round Table may help you here (specifically Sir Percival and Lancelot). It's also recommended that you purchase 5 Knights before attacking as well.

Once you're ready to attack, head immediately North and capture the estate in front of you. This is probably held by Dietrich and guarded by a Frost Giant. If this is the case, you want to attack only with your Knights. Your Knights will quickly kill the Frost Giant and save you a lot of units. If it's protected by other weaker units, you can use anything to defeat them. Next send forward all your Knights, your battalion of Pikemen along with any Knights of the Round Table you purchased and Arthur to this estate. You will quickly overwhelm the estate which is good, but that's not your target. Stay here only until all your units catch up.

After this - simply charge Vlad's Keep. The best way to do this is to send your Knights and Arthur near the front. While this may seem insane, Arthur's power can actually help you here - summon his group of Knights before you reach the Keep and send those Knights immediately onto the Keep and start attacking Vlad. Vlad will then summon his Werewolves to attack your Knights, but within a few minutes both groups will disappear and cancel each other out. This means you may have done some damage to Vlad, but your units have sustained no damage themselves. From here, the job is relatively simple - all you need to do is storm the Keep with your remaining units. You will find you quickly overwhelm him and the estate will fall. One down, two to go!

Your most troublesome neighbour is now gone which will give you some much needed breathing space. It's probably easier to take out Dietrich next- he's pretty inactive, and is much weaker allowing you to save your troops for a 1-1 with Beowulf. Begin by recruiting some more Knights and recapturing the two closest estates which Dietrich holds. You should also be able to place Glory statues now which will generate consistent Honour for you. Now start by recruiting more Knights, Pikemen and Archers, sending them all to guard the estates you have now recaptured. It would also be recommended to switch on your estates to producing items for you - Iron is a good resource in Vlad's old estate and various food types in the rest.

When you have enough gold, place a Siege camp in the estate to the right of Dietrich's at the following location: 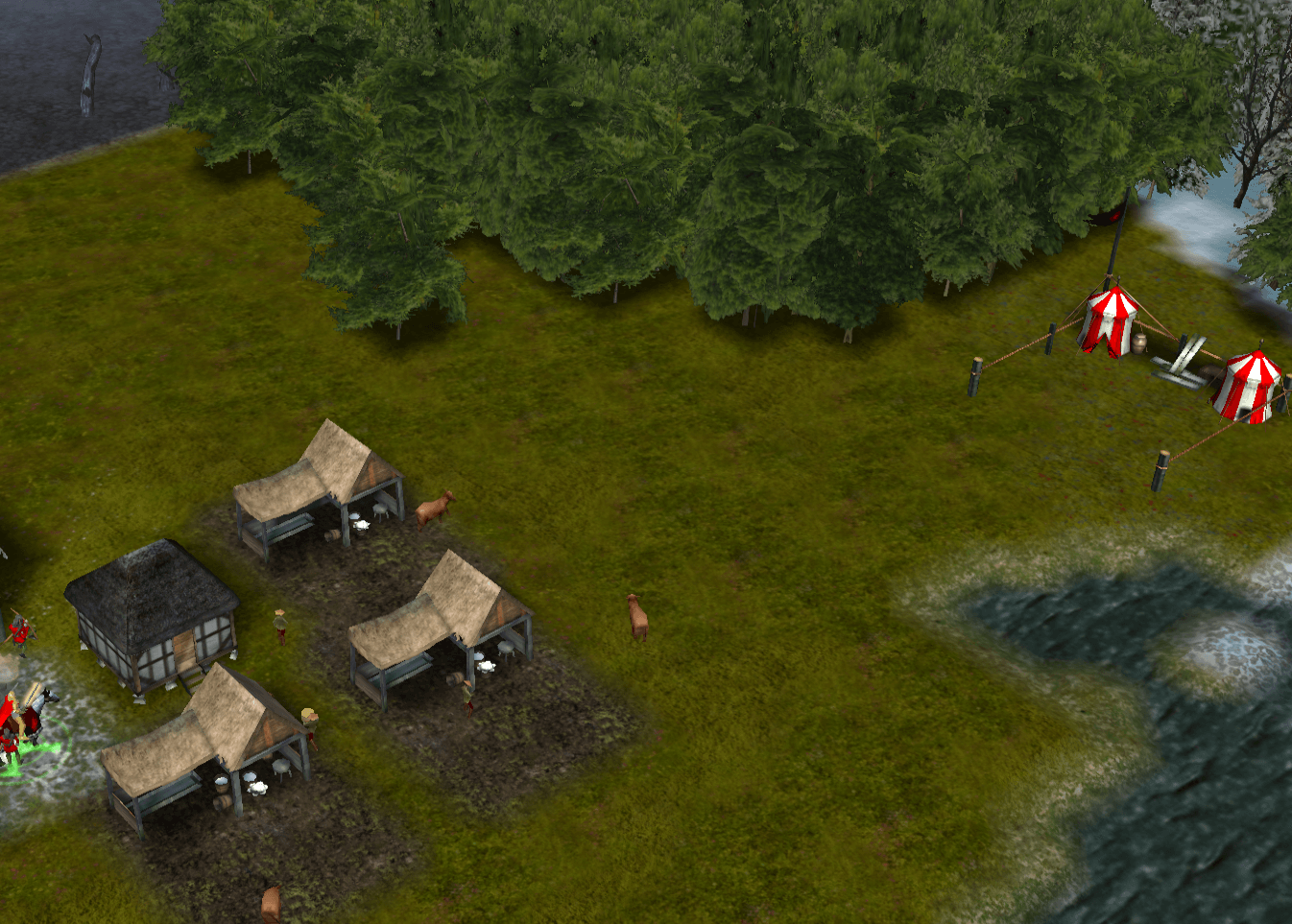 From here purchase two Trebuchets and begin to attack his Gatehouse, Towers and Walls. This location is prime because you cannot be attacked without him going through your troops first, giving you unlimited time to do whatever damage needs to be done. Recruit about 50 more Archers, sending them to capture the last of Dietrich's estates at this point. Unfortunately, you can't really do this without disturbing Beowulf's estate as well, so send all your troops guarding your estates to take this estate first, and then move your Archers to the edge of Dietrich's estate attacking whatever troops are protecting his estate (most likely White Wolves with a few White Witches). This will prompt them to attack these enemy units nearby, but the Crossbowmen on the Lookout Tower won't be able to reach you yet. 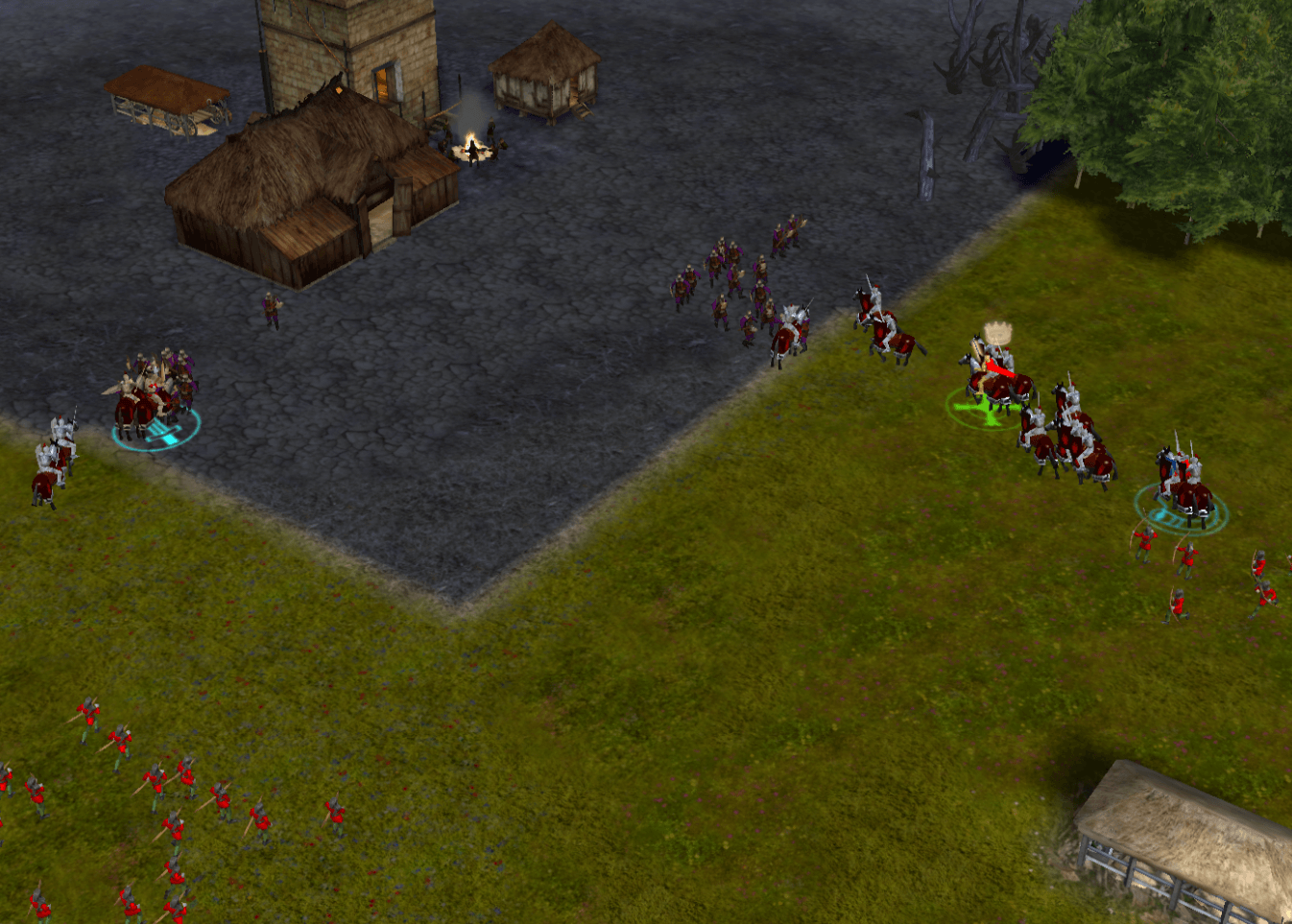 These will quickly be dispatched, at which point recruit two Trebuchets and move them to the same location. From here, destroy the Lookout Tower stationed near the (probably now destroyed) Gatehouse. It might make sense to move your other Trebuchets here as well at this point, because they may not reach a few of the next important positions.

Tip: Chances are that throughout this process Dietrich will probably send out a Siege at least once. However you don't really have anything to worry about anymore - your Knights and Archers will easily defeat the sloppy force sent to attack you meaning that the Siege will never even occur as the army will never arrive to its destination! And as a result, saving your troops to fight against Beowulf instead.

Once you have destroyed Dietrich's Lookout Tower, you only have one other target - his Barracks. Once both of these buildings have been destroyed, send all your troops at the nearby estate in to his Castle. Storm the Keep, kill Dietrich, and that's two opponents down! 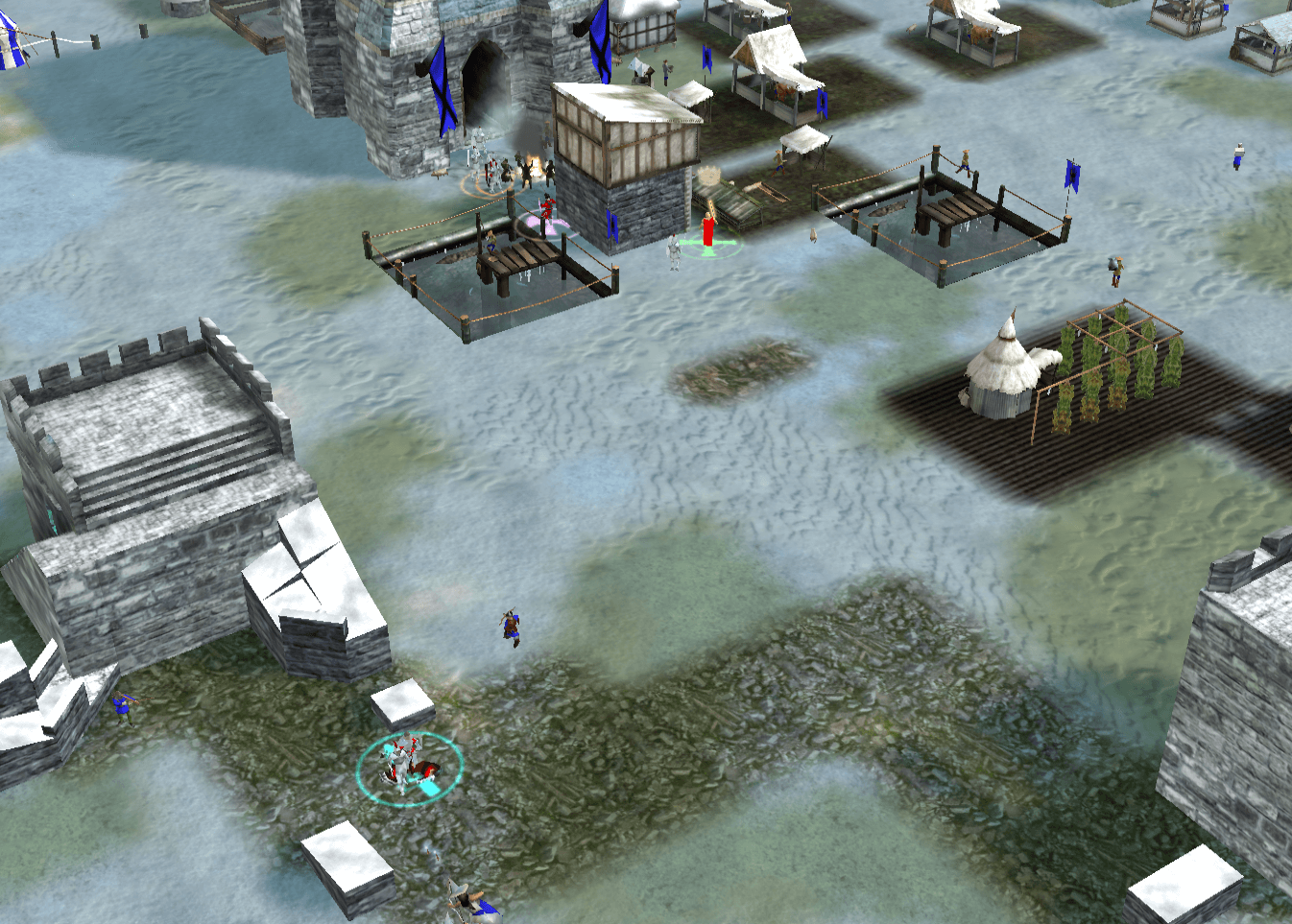 At this point, assuming there is no active Siege from Beowulf, bring all your troops out from your castle, capture all estates remaining on the map, and park your entire invasion force alongside your entire army at the estate outside of Beowulf's Castle. Bring your Trebuchets over from Dietrich's Castle, and take out his Gatehouse. You'll likely find that his Castle is so poorly defended there is virtually no struggle. In which case, depending on how easy this is, either destroy his Barracks first, or just move straight in. Charge the Keep, kill Beowulf, and victory is sweet! 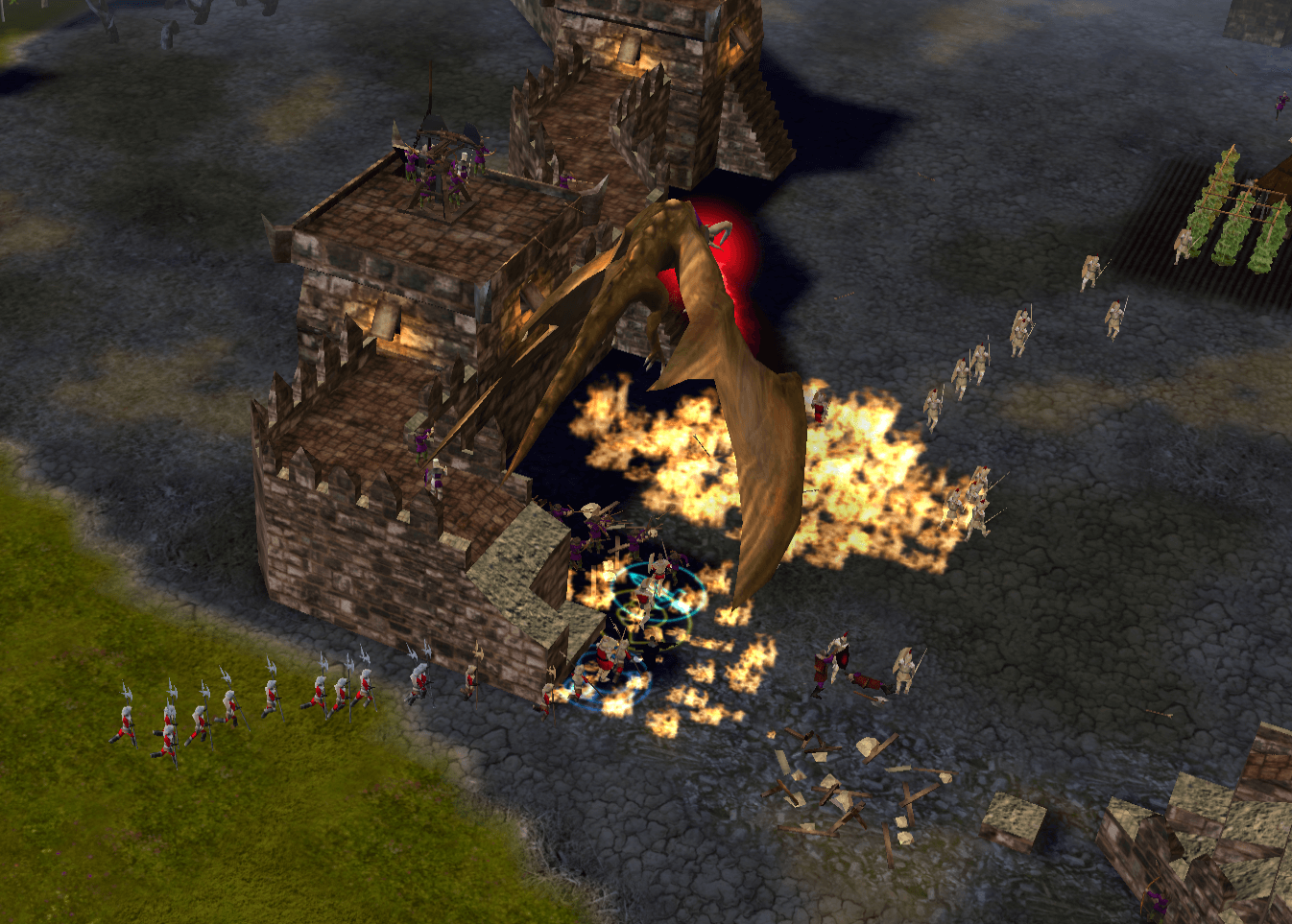 Congratulations on completing all of the Stronghold Legends Skirmish Trails! By now you really are a true legend. You can find your final saved game of this mission in our downloads section here.