Starting at this mission you find yourself in a central plaza with both Siegfried and Dietrich either side of you. You don't have a lot of resources to work with at the start and you need to move quickly in order to avoid being potentially wiped out from both sides. Once the AI gain their strength, one of these Lords alone is a challenge but two together are potentially fatal.

Begin by placing your Stockpile near the supply of Iron and Trees. Place your Granary at the rear of your Keep, this position will help to keep it protected should any Frost Giants break through into your estate- which is likely to happen at least once at some point. Place two Apple Farms, two Chicken Farms, three Iron Mines, two Hovels, an Ox Tether and Pantry. Then place your free Wood Camp.

It doesn't take a tactical genius to see that Dietrich's castle is the most weakly defended and poses the biggest problem to you later in the game, so we will start by targeting him to avoid fighting on two fronts. But you still need to move fast. Place a Barracks next to your existing wall by Siegfried's estate, and your Armoury near your Stockpile. Once you've done this, blockade all paths from Siegfried's estate into your own with Stone wall.

Tip: By blockading the paths to Siegfried's castle with wall, as well as helping via defensive fortifications, it also tricks the game into believing his units can't reach your estate. This means that any sporadic Frost Giant attacks that Dietrich would typically send to your castle will no longer occur until there is a way for his units to explicitly reach your estate. This does however mean there is a chance there could be a build up of attacks when you do eventually create a gap in your wall for your own invasion. It also does not apply to actual Sieges from Siegfried - these will still occur.

Now recruit as many Archers as you can, along with any knights you can. Archers are your immediate priority though. This will probably take a bit of time to recruit them all, so in the meantime to prevent Dietrich from building up an invasion force, send Arthur into his estate. Keeping away from Dietrich's castle walls, begin by destroying his Granary, any Statues and food production buildings. Next destroy his Hovels, and then move over and destroy his Wood Camps, military production buildings and Stone Quarries. By this point you've essentially decimated his economy with probably no damage sustained at all, although you do still need to be mindful of his, albeit small, Military presence. 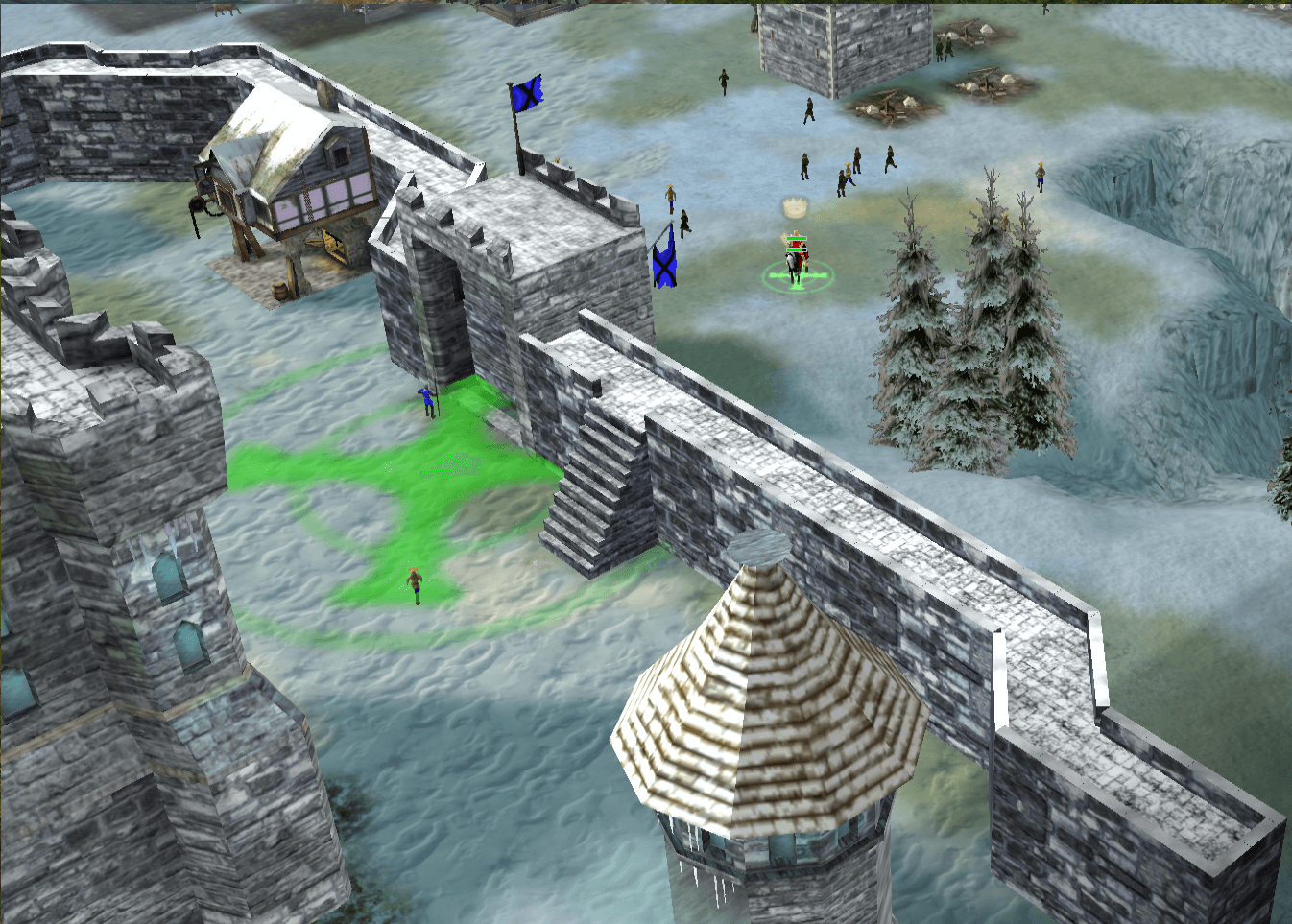 Moving Arthur around his walls and near the rear Gatehouse, use your Special power to summon a group of Knights behind his walls. From here, immediately destroy Dietrich's Ice Tower. This is now the biggest threat eliminated and you can finally relax. Send one Knight to capture the Gatehouse allowing Arthur passage through, and the rest can destroy any other buildings within the central perimeter wall. They won't destroy all of them before vanishing, and there's not really any need yet.

At this point carefully avoiding the Ice Mirrors, skirt your recruited Archers (I estimate at least 30) around Dietrich's walls and through the Gatehouse you've captured. From here, station your Archers directly atop of it attacking anything within range in the Castle, and any Knights near the stairwell. Your goal isn't to launch a full-scale assault yet, just to continue to weaken his army and economy as much as possible, and to further your own control.

Now things with Dietrich are stabilised, you should look towards Siegfried. You should be receiving a troop of reinforcements by now, so use these to defend your other border with Siegfried. Forget about Dietrich for now as your troops will continue doing a lot of damage and he can't recover from this state anymore. You should also have some wood stored up by now. Using it to good effect, place another two wood camps and a hovel. You may also wish to sell some Iron, Stone or Wood, and in return purchase more Archers (but station these on your wall against Siegfried). 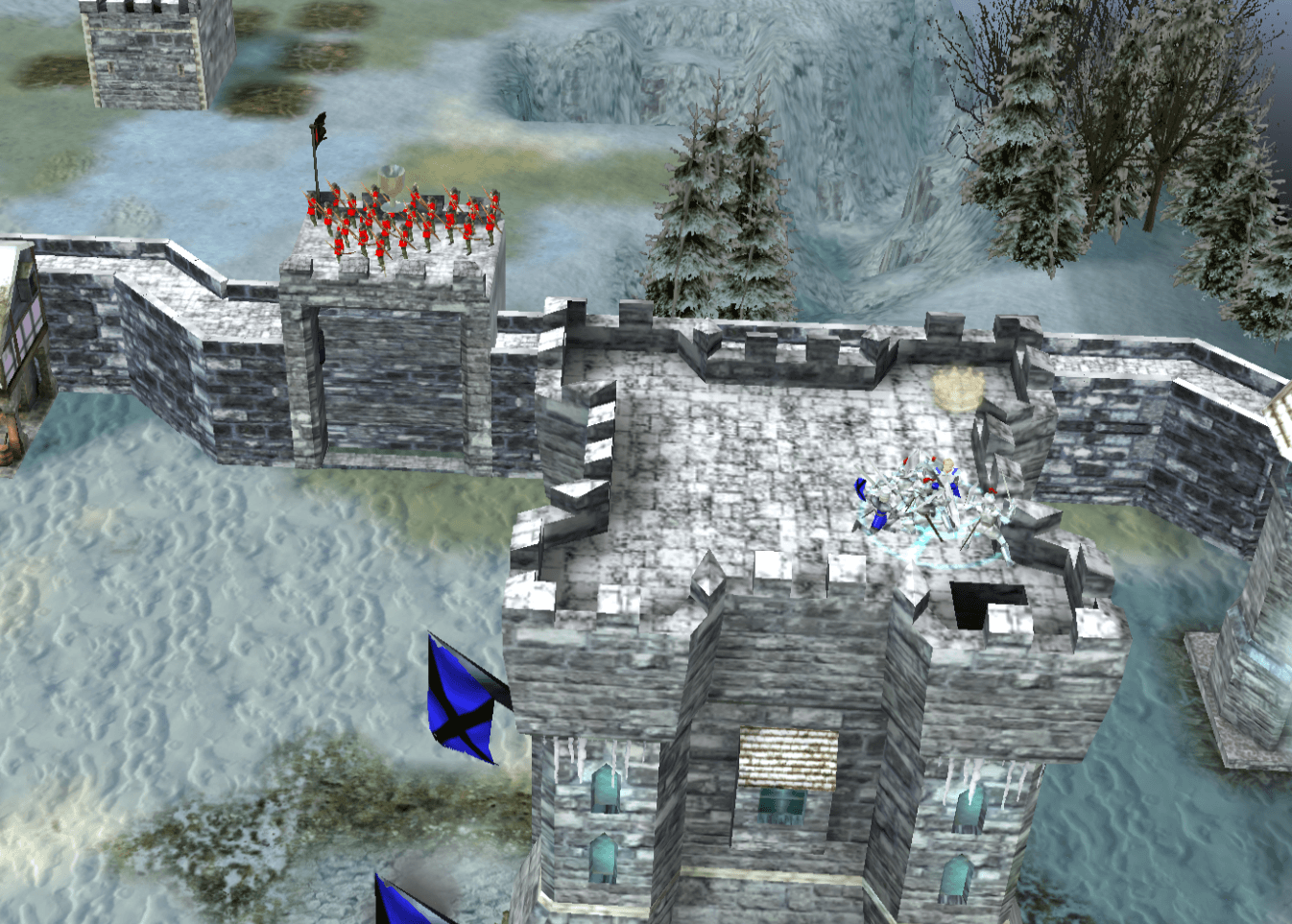 Set your ration level to Double, and your tax rate to Extortionate. This will bring you valuable additional income allowing you to continue recruiting troops. I don't typically use Macemen, but on this occasion they come in useful. When you can, purchase 5 Leather Armour and 5 Maces. Then recruiting 5 Macemen, send them over to Dietrich's estate and destroy the (probable) replacement Wood camps and stone quarries he's built, leaving your Macemen stationed in that position for the moment.

At this point put everything you have into recruiting more Archers to defend your wall. Sell everything in your Stockpile, and just keep purchasing Bows and then recruiting Archers. Keep doing this until you have roughly 70 Archers on your wall. If you play your cards right, you're in a good position to take on Dietrich now. Send your Macemen into the Castle and next to the Stairwell. From here move Arthur next to them as well.

The plan of action here, is to send your Macemen onto the Keep by themselves. This will automatically trigger Dietrich's Shield Maiden power, so ignore this and allow your Macemen to die and the Shield Maidens to vanish again. Now, moving Arthur onto Dietrich's keep, summon your own Knights directly in front of his Keep, charge to the top with all melee units nearby and in a brutal hand-to-hand combat, you will take Dietrich out. In fact, it may happen before Arthur even reaches the top of the Keep! 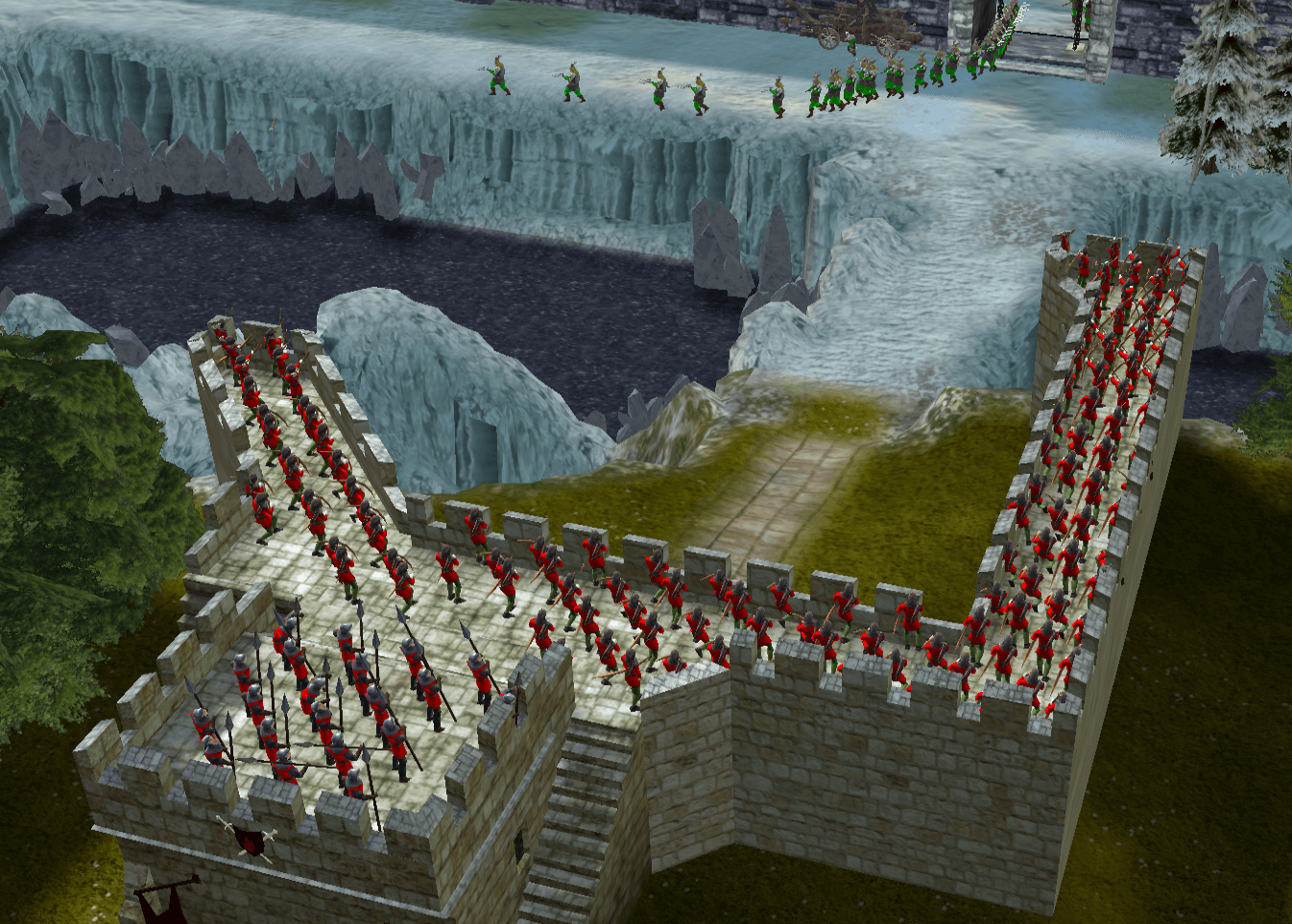 The news for you gets even better now as Dietrich's old estate predictably converts into a village you own. The hardest part of the mission is over- you can now breathe a sigh of relief, and focus on your economy again. Send all your troops back to your wall now.

Start by placing another dozen or so Apple Farms, Chicken Farms and other food production buildings, five more hovels and as many Iron Mines as you possible can, along with two more Ox Tether. From here also place a number of each of the Pantry buildings and increase the rational level of the Pantry as well. This is the point by now Siegfried should be just about ready for his first siege attack of you. But you should have so many Archers by now that it isn't even remotely a threat. 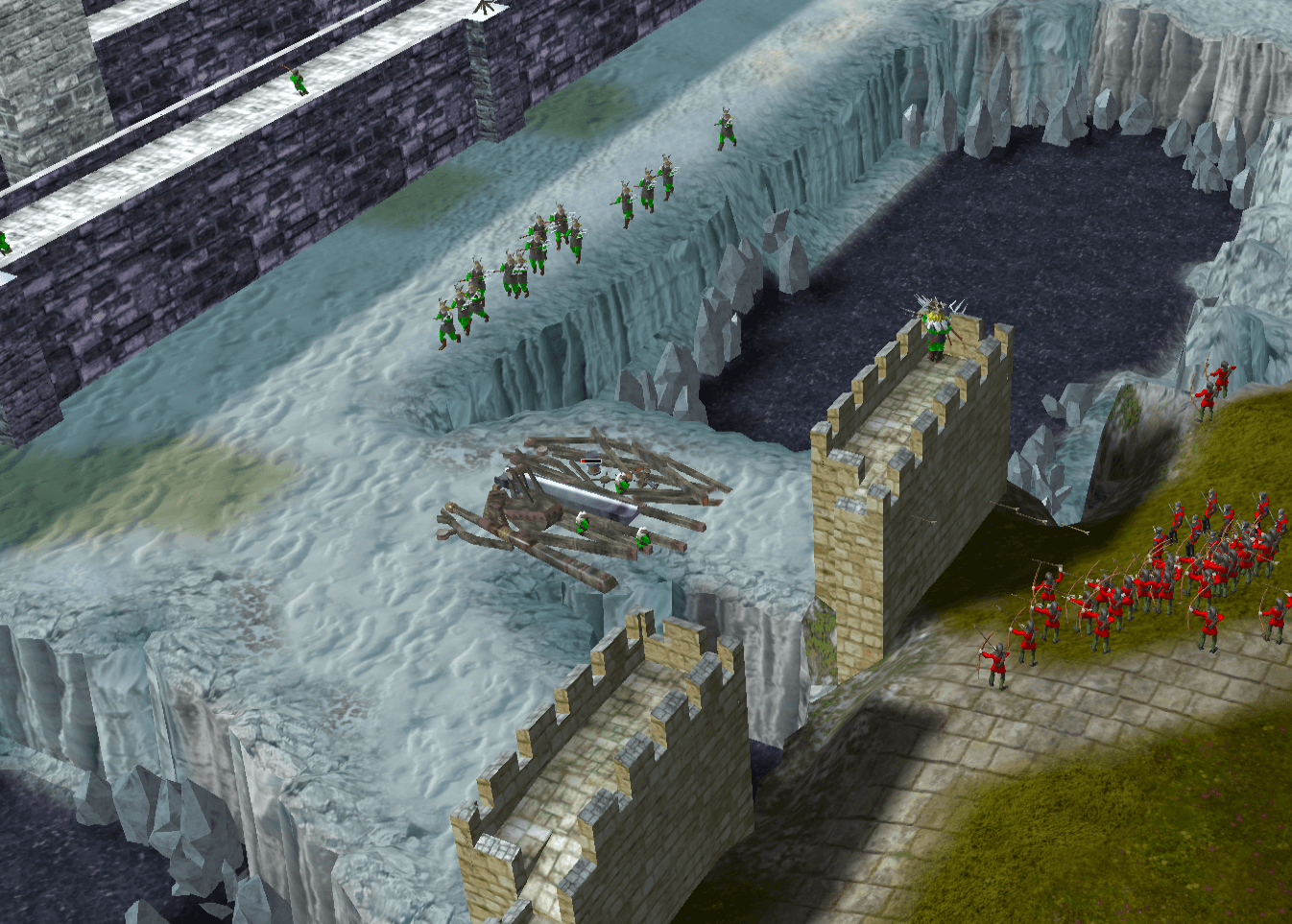 The only potential "annoyance" is the Trebuchet, so bring some Archers down from your Barracks, and specifically target it. The Trebuchet will always go to the exact same location and you can easily take it out via a troop of Archers. 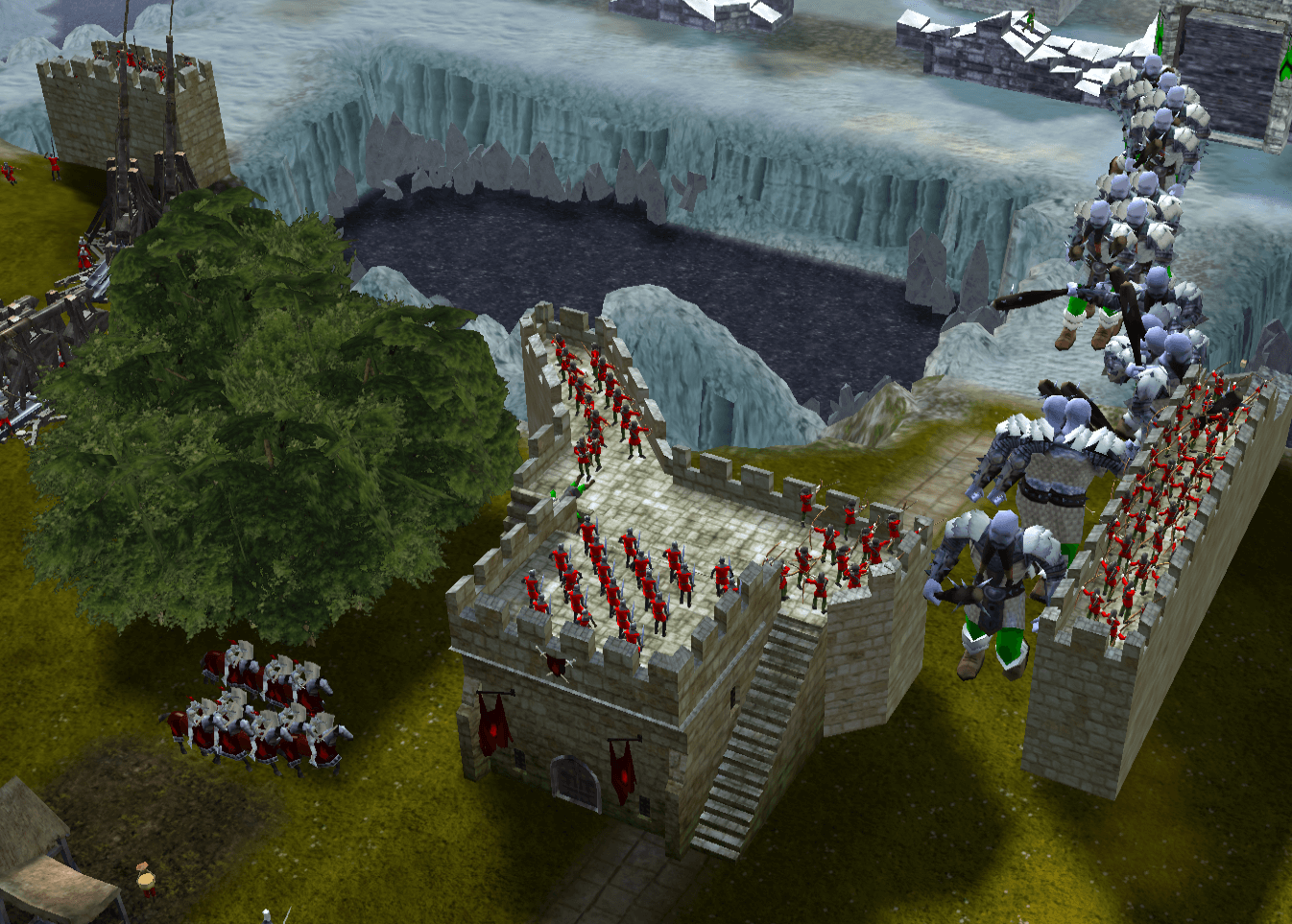 Once you've fought off the Siege, you're now ready to launch your own attack on Siegfried's castle. Place a Siege Camp, and selling all the Iron in your Stockpile, purchase as many Trebuchets as possible. Initialising them between the left and center walls, start by destroying his Ice Mirrors on the opposing wall. The castle is poorly defended to be honest and will easily crumble under the force. Once the Ice Mirrors are destroyed and you have a sizeable breach in his frontal wall, you should then obliterate his towers on the secondary wall: first the lookout towers, then the engine tower. Bonus points if you destroy his Engineer's Guild in the process as he will be unable to repair any further damage.

Next on your list is the Armoury and Ice Tower. He's likely to go on a recruitment-spree at this point now and launch another Siege at you, but you have the upper hand at this point and you will be able to destroy his siege camp with your Trebuchets. The only other point in his castle you need to be wary of before launching a full-on frontal assault is the Ice Queen, stationed on the right hand lookout tower. For this, recruit another three Trebuchets and send them over behind your right hand wall to take her out. What happens next depends upon how quickly you want to actually attack. Personally I always prefer a prolonged and brutal siege and get immense satisfaction out of watching every part of an enemy castle slowly fall apart... but as soon as you're ready to invade, you need to test the waters.

Begin by erasing a small section of your wall and immediately replacing it. This will trigger any Frost Giants to attack you that have been trying to get into your estate- and you're likely to find it's a significant build-up. If you don't manage to replace it in time, his Frost Giants will simply parade through as shown below. If you do manage to, they will attack you and try to break their way through. You will sustain a lot of casualties, but his Frost Giants willfocus solely on destroying your walls allowing you to kill them. Knights will also help, and you can also use Arthur's special power to summon more Knights to help you. In the example above, this is the worst damage sustained by the attack: 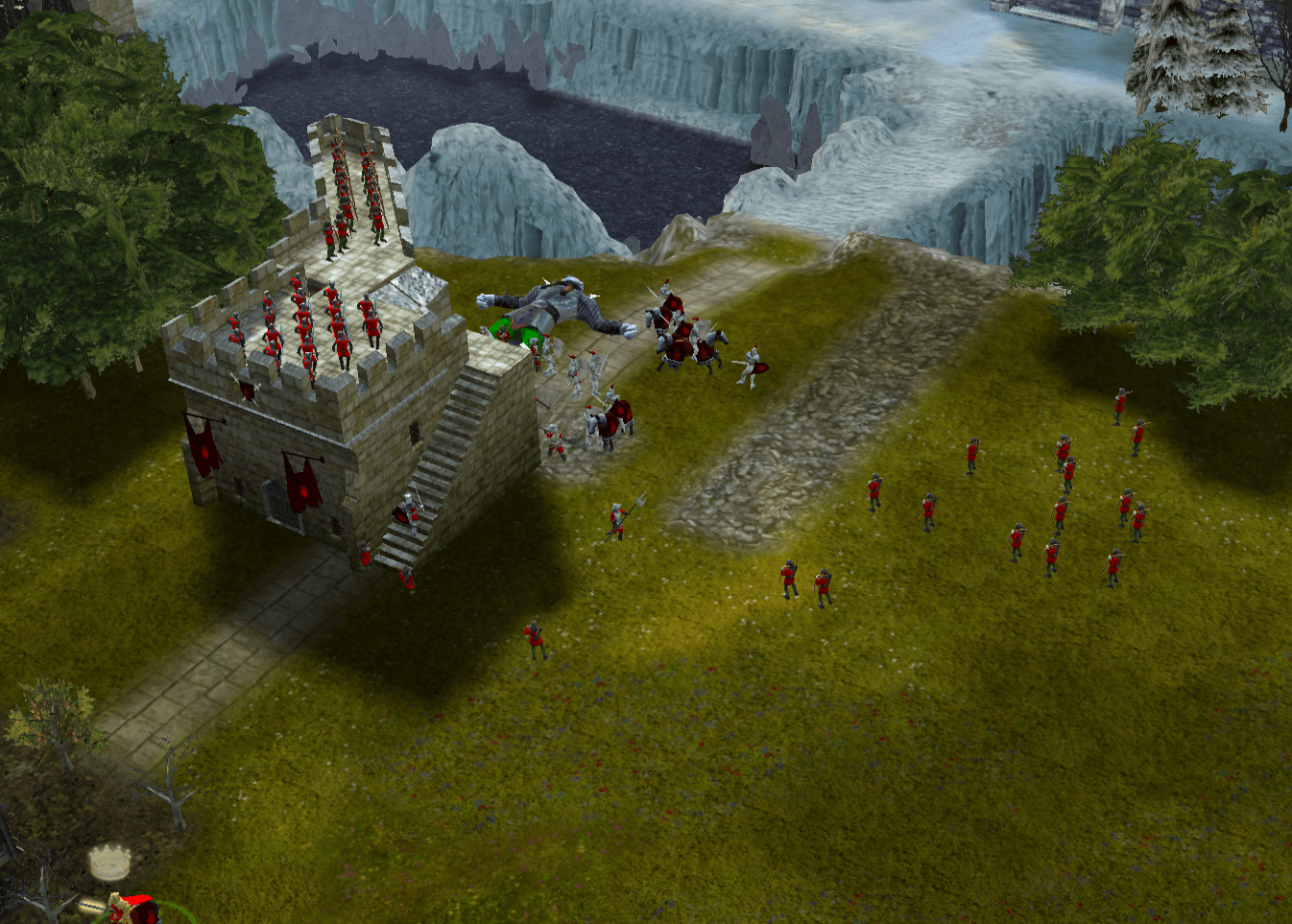 Because you've already repeatedly destroyed his Ice Tower and Armoury, you've now decimated all of Siegfried's troops and he has no way of replacing them. From here, charge the Keep, kill the guards and take out Siegfried himself! Victory!

Your completed saved game of this mission can be found here in the downloads section.