Arthur's Challenge is an exclusive Skirmish trail in Stronghold Legends that was previously only available on the Gold version of the disc game, or, via the bonus content here. However in 2016 Firefly made the game digital through Steam and in doing so released the bonus content to the wider public for the first time. The first mission in this trail is timed until defeat, but don't worry as you have more than enough time to comfortably win.

At the start of the game you will notice the map is displayed in the shape of a horseshoe, with yourself at one end and Lancelot at the other. There are no other opponents on the map, although there are some villages along the way. The news gets even better by the fact there is only a single way to and from each castle - meaning that once you take the estates, all you need to do is hold them until you can invade.

Start off by placing your Stockpile between the Iron and Trees - this will quickly boost your economy. After this you will want to place your Granary away from your industry, so I recommend by your Keep where there is plenty of space to place some production buildings. Place two iron mines and an ox tether, two apple farms, two chicken farms and three dairy farms. At this point place a Fletcher Workshop near your Stockpile, and you should have virtually no wood left anymore. This means you can now place the free Wood Camp, before purchasing enough wood to place one more Hovel. 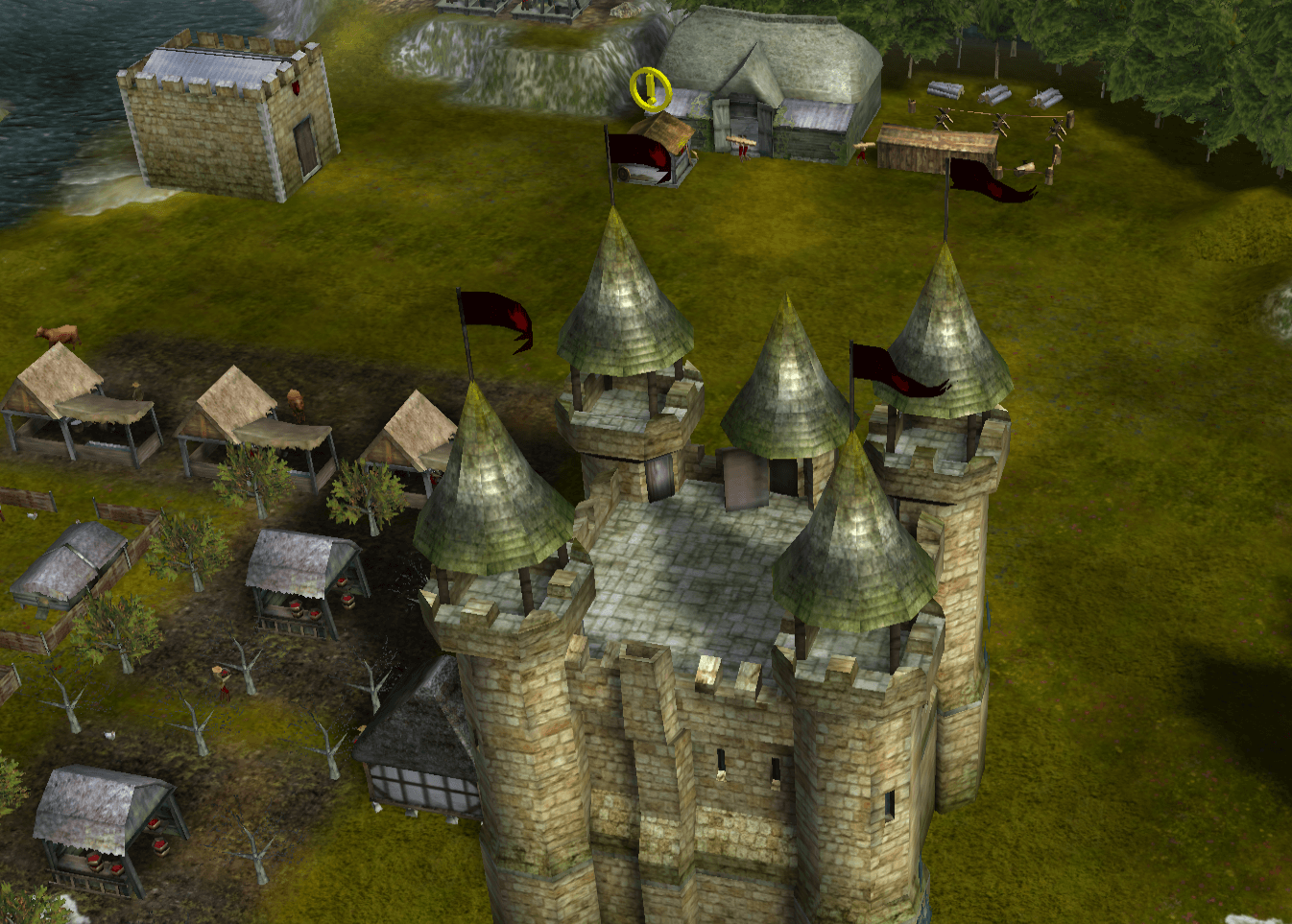 Now look to your defence: place a Barracks near the existing Round Table, and an Armoury near your Stockpile and Fletcher Workshop. Begin by recruiting all the Archers you can until you run out of weapons, and then go on an estate-capturing spree with all your troops. Once you capture an estate, ensure that it sends you some kind of valuable resource, and move on to the next estate until you've captured all of them. At this point, station your troops here, bring your Lord, recruit Merlin from the Round Table and station him here as well. This is now your frontier, and you must defend this with everything you have.

Place another Wood Camp and a Hovel to boost your wood production. You also need to ensure you have a consistent amount of honour coming in from your own estate as well, so place a Pantry and two pig farms, and increase the ration level. You can add more Pantry buildings such as and when you can afford them via the wood you receive, but the important point to focus on for now is recruiting Archers and sending them to your frontier.

You can also sell iron for this purpose too (or wood), which I would recommend: Iron sells for a high price, and it's a very easy way to quickly produce many bows as you can purchase them back in the Armoury. From here, recruit your Archers, and you can quickly scale your army.

Set your food ration level to Double, and begin taxing your peasants at an Extortionate rate. They won't like this, but as long as you can keep a steady food supply then there will be no repercussions. Remember that the goal here is to capture the enemy settlement as quickly as possible, not to build your own. To this end, anything that you don't need in terms of resources should be sold. That includes shipments from your villages. Use the money to recruit more Archers, Men-at-arms and all the Knights which you already have weapons for in your Armoury.

Your next priority should be generating Honour: this is a very easy way of getting some powerful units quickly. Place two Vintner's Workshops and a Vegetable Garden, plus two more Hovels and another Chicken Farm to keep your food stocks high. By this point your settlement should look something like this: 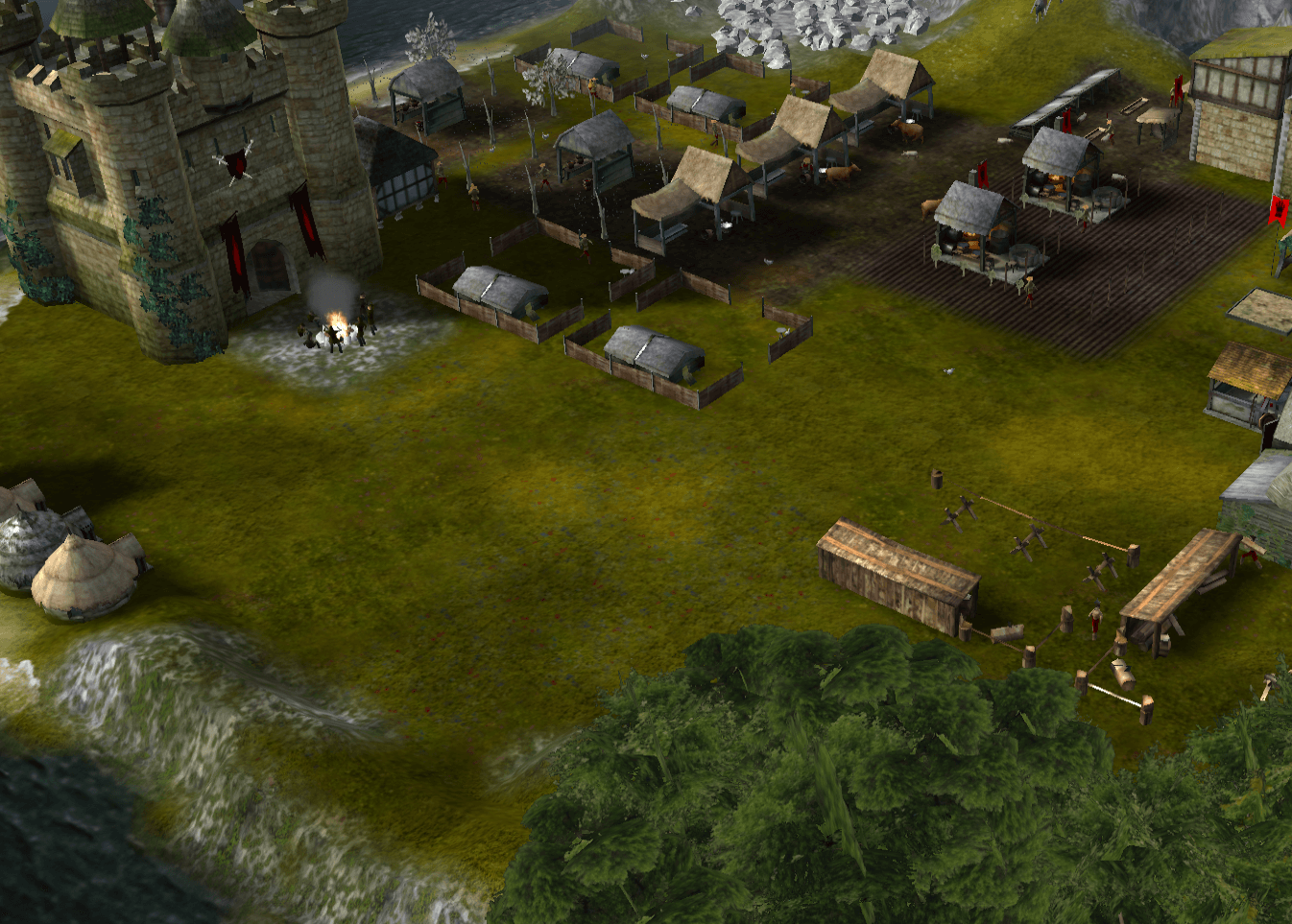 When you have enough available gold, place a Siege Camp in your frontier estate. Note however that you should place this very carefully- as you can see via the screenshot below, Archers in Lancelot's Lookout Tower can and do reach the estate, and are killing woodcutters nearby. Place the Siege Camp behind the Wood Camp to avoid them from destroying down your siege equipment almost as soon as you recruit it.

To make things even better for you, recruit a Trebuchet and set it to target the Lookout Tower. This is the only real challenging point for you, and once you've taken care of it things will get a lot easier. Lancelot's Engineers will try to repair it and any damage you do to the surrounding walls, but they will be unable to keep up with the damage that you eventually cause. To hasten its demise, recruit another 2 Trebuchets. Doing so will also knock Archers off his walls as well, so there are added bonuses to this method.

Honestly speaking you don't even need to destroy the actual Tower as a simple breach in the wall would suffice. Once you feel like you've caused enough chaos with the Lookout Tower, move onto the Gatehouse, and then the two Engine Towers. One by one they will all fall, and then you can move your Archers in.

Tip: If you're struggling to take them out, abandon this phase and simply make a small breach in the walls. From here, send in your superior number of Archers and wipe out all the defenders.

Begin now by attacking the second level of fortifications. You will quickly destroy the enemy Pantry and wall, so once this has been achieved, move all your men into the inner courtyard and kill off any defenders nearby. 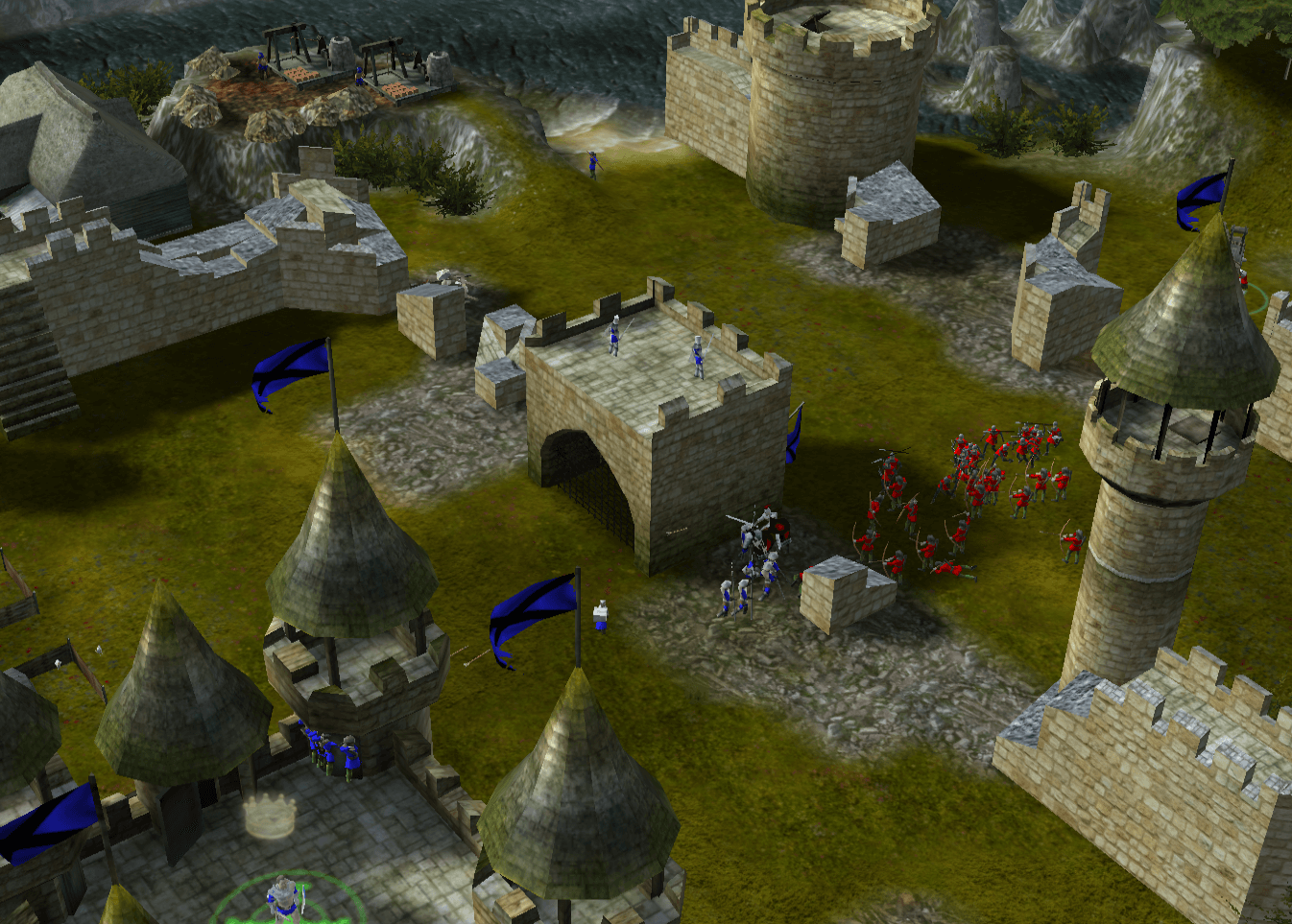 Bait the Pikemen with your Archers, and then pull them back and move in with your Knights to dispatch them. From here, charge the Keep with everything you have. Lancelot will use his power to summon a group of Knights, but this only provides temporary protection. Once more, use Merlin's power to weaken Lancelot, and you can also use Arthur's power to summon Knights of your own. With all this you will quickly and easily take the advantage, and Lancelot will be defeated in no time. Victory!