Deathmatch vs King of the Hill Mode

The Custom Skirmish settings in Stronghold Legends provide two distinctly separate game types for you to play: the first (and default) is Deathmatch, and the second is King of the Hill. For those already familiar with gaming, these terms should be fairly familiar. However for those of you who may have just been introduced to these concepts for the first time, it may seem slightly confusing. There are also, broadly speaking, different definitions of what Deathmatch and King of the Hill are depending on generally what games you play.

Deathmatch in essence is a game setup where you play against a number of other players (either humans or computers), and the last person standing wins. It's typically used in many multiplayer or first-person shooter games. But, it has also been used in Stronghold ever since the beginning. The Stronghold Legends 'Deathmatch' mode is essentially what the Skirmish mode has been in all previous Stronghold games. That is, you build your Castle, play against the AI, capture some estates and try to kill all the enemy Lords. If you can kill all of the enemy Lords, then you win the game. Unlike in the Stronghold Legends Campaign, there are no restrictions on what you can build or recruit (unless you specifically set them via the Custom Skirmish screen). 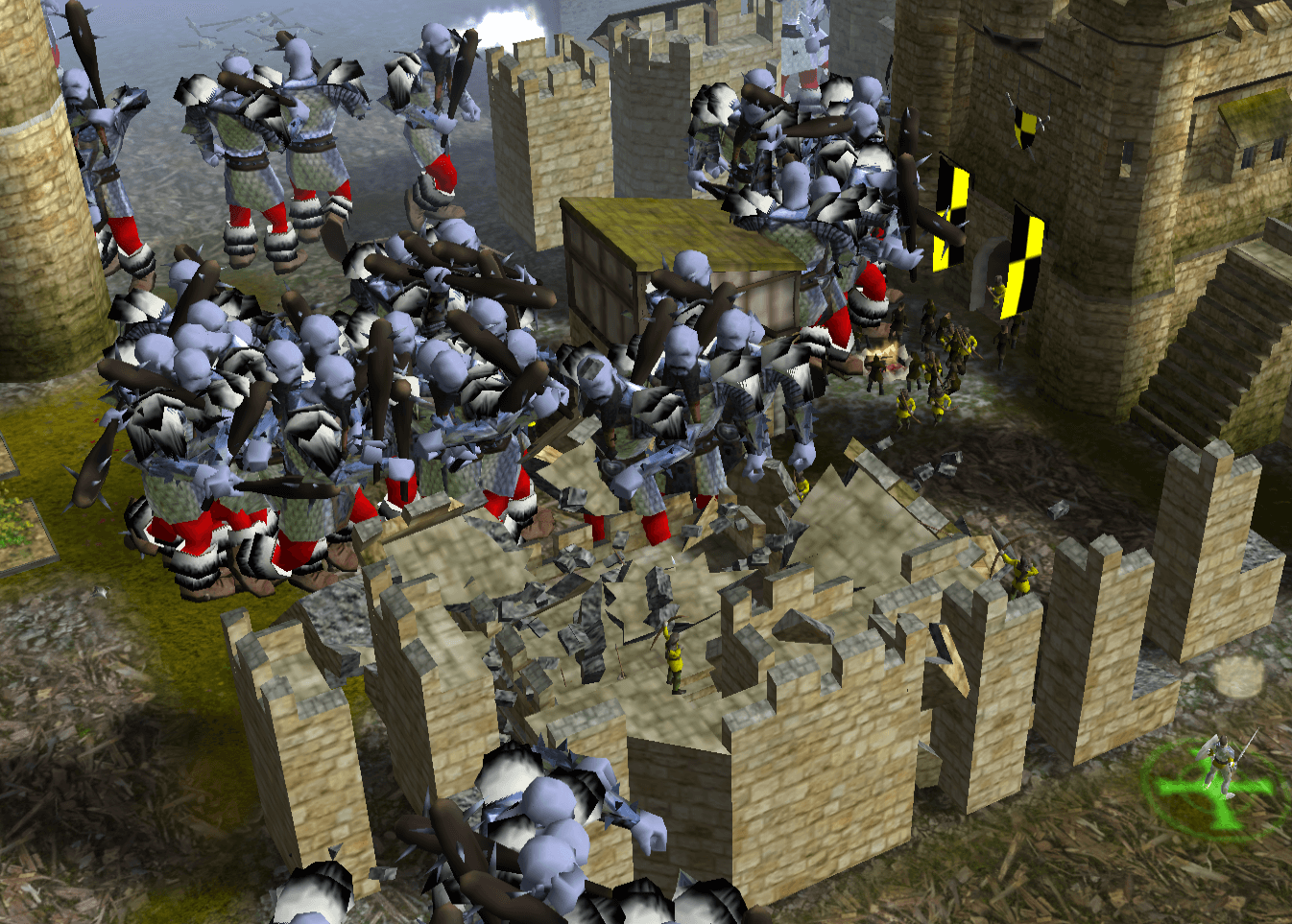 King of the Hill works slightly differently. This game type is a one where you need to keep control of a central point on the map to gain points. Once a player reaches a certain number of points (as defined in the Custom Skirmish settings) then he/her wins the game. As with Deathmatch there are multiple types of King of the Hill depending on what games you play, but the likelihood is you will probably have heard of this if you play first-person shooter games. In Stronghold Legends King of the Hill mode, you still create your Castle as you normally would during a Deathmatch game. However, King of the Hill maps may only have a single village estate placed on the map by default. This is the designated location where you and the other enemy Lords will be heading to in order to try and claim victory.

By default all the original King of the Hill maps contain enclosed Castles around your Keep. This is an added precaution to defend against attacking enemy units, considering you will need to move your army out of your own Castle to collect King of the Hill points. If you don't set a player for one of these estates in the Custom Skirmish menu, and it becomes a neutral estate in the game (i.e. capturable village) then a hole should appear in the back of these walls which will allow your troops access to claim the estate as your own. If a hole does not appear then you have limited options to take the estate. Laddermen and other traditional siege equipment will not work because it is not an enemy estate, so your only real option is to use Special units who can break down the walls for you. A great example of these are Frost Giants and Polar Bears. 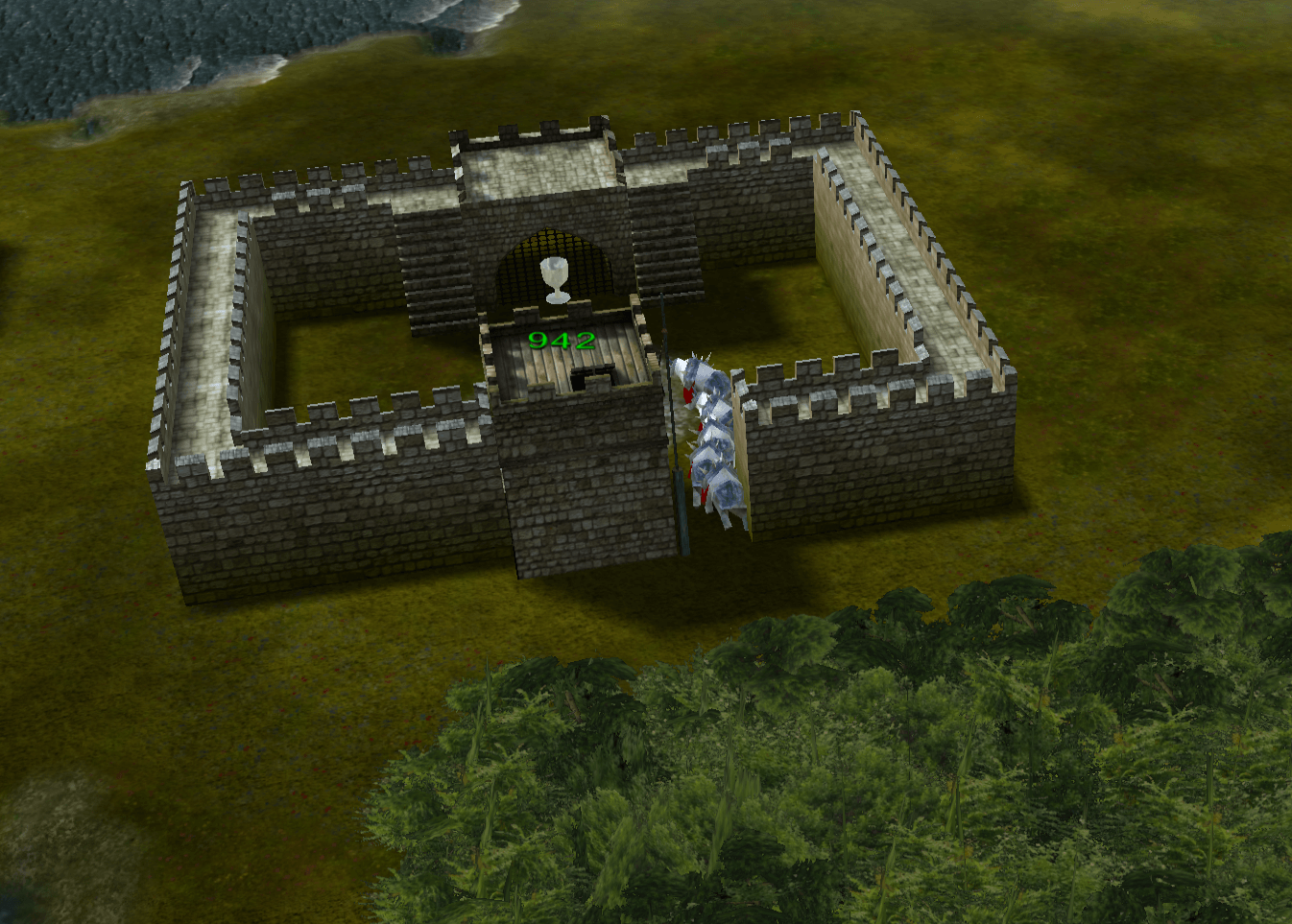 From the start of the game, you will see a number of circular Knight icons on the top-left of your screen, each in a different colour with respective lines running around the outside of them. Each colour represents a player's colour in the game, and if you hover over the icon it inform you who that player is, and how long they need to spend in minutes in the designated area in order to win the game. This length of time depends entirely on the number of points you setup in the Custom Skirmsh settings to win the game (default 5).

In the center of the neutral estate on the map, you will find a Stone Circle, hopefully only one. If there is more than one Stone Circle on your map, and your graphics settings are not high enough, you will need to guess which Stone Circle, or see which direction any AI troops are moving in, in order to work out which one it is. By stationing your troops near the relevant Stone Circle, you will take control of the designated King of the Hill area, and start generating points for yourself or your team. A player must station troops in this area and not be hindered by enemy units or lose control of the designated area in order to continue claiming points. If you have previously killed enemy units in this area before you took control, you must wait for their bodies to disappear before you will start claiming your points, assuming that you continue to keep troops stationed in this area.

If you kill the enemy Lords as shown below, as you would do in a Deathmatch game, then you win the game as normal.

Under usual circumstances, once a player takes control of the designated area, a flag will appear indicating the player's colour. On these higher graphics settings however, a magical beam will also light up and illuminate back towards the player's castle who is in control of the King of the Hill area (see the right side of the following image). 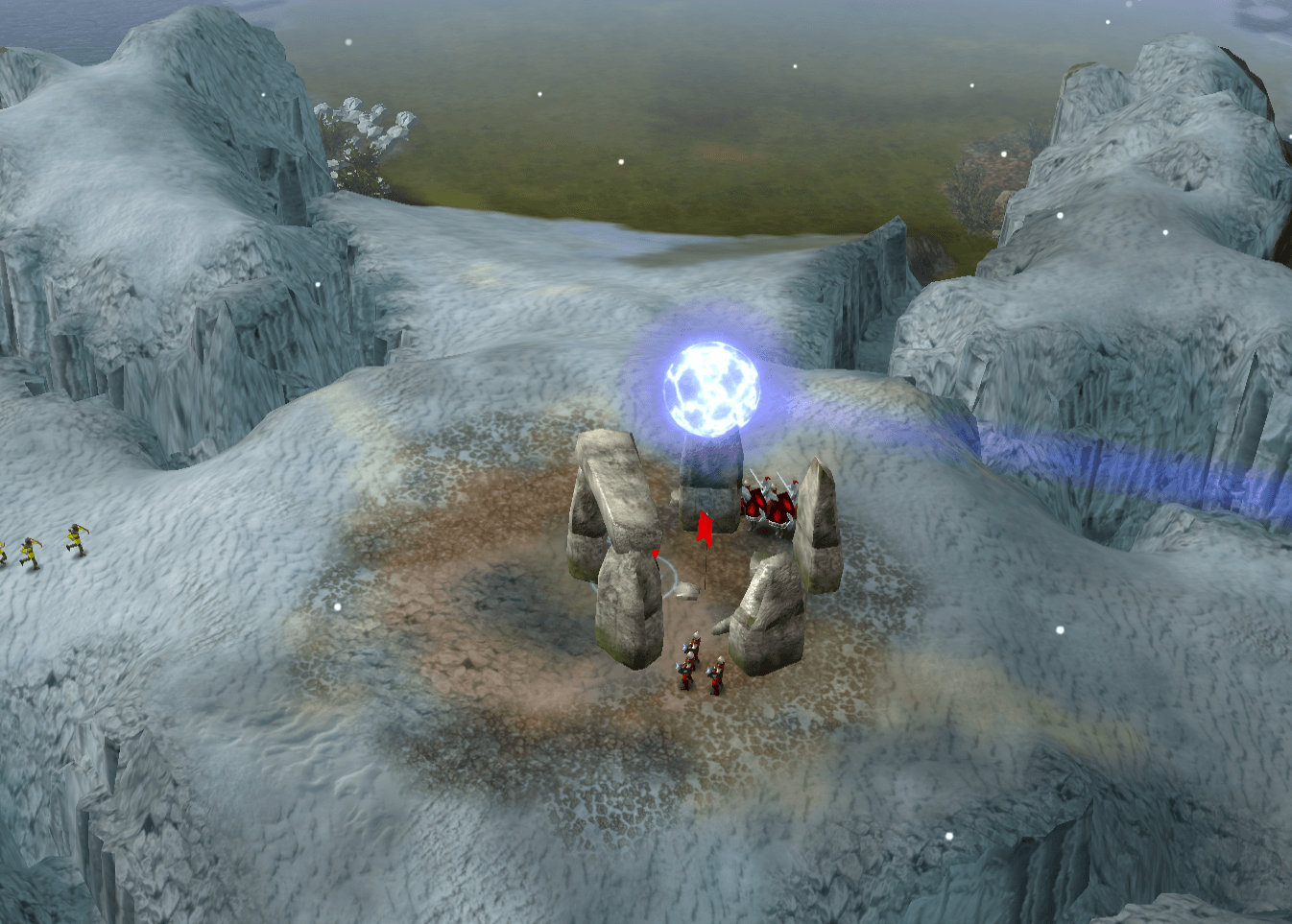 As the time decreases towards the final number of points required to win, the AI will send a final force at you consisting of virtually all their troops in one last ditch effort to take the designated area. Foil this, or at least hold it off, and you've won!

Note that you can still 'own' estates in King of the Hill exactly as you can in Deathmatch games, although no player can own the estate which contains the designated King of the Hill area. The default Firefly-made maps only provide Castle estates with one single Stone Circle so none of this is a problem on those. However if you're interested in creating your own King of the Hill maps, this is something that you should know if you want to make your map more adventurous or interesting. For the sake of simplicity, it's far easier to ensure that only one Stone circle is placed on each King of the Hill map. The same number of maximum castle/village estates apply to King of the Hill maps that do with regular Deathmatch maps as well.