An Introduction to Factions in Stronghold Legends

Unlike the previous games of the series, Stronghold Legends introduces the unique (and in my opinion very exciting) ability to play as a faction. For those of you who are unaware of what a faction is, I asked our very own resident Historian Crusader1307 to provide a description. This is what he told me:

A Faction in Political Terms is a Group of like minded People who gather to achieve their shared goal. Even if such people can't stand one another - they have a like-minded belief. In Western Politics, Factions are not really seen as they would in The Middle East or in Socialist Societies.

Militarily, Factions may have started as the above, but eventually take to Arms to enforce their common goal. One could see The American Civil War or even your English Civil War as a 'War of Factions'.

In Medieval Terms, Factions were formed more out of Political necessity that achieving a Government goal. Namely, Prince 'A' may not like Prince 'B' - but both despise their Monarch. Perhaps they should form a Faction and depose their Liege. The same could be said for Kings vs Kings, etc. A quick example would be England's 'Anarchy Period'.

So now that you know what a faction actually is, it's important to know how many there are in the game, as well as the different attributes, strengths, weaknesses etc of each one. In Stronghold Legends, there are three faction types. These are:

Each faction is identified within the game by the corresponding icon. You can play as a faction in a Custom Skirmish game, multiplayer game, or even in a user-created map. Indeed, even the official game campaigns have changed. In Stronghold Legends, there are now three official campaigns of the game, and in each one you play as a separate, individual faction as shown below. 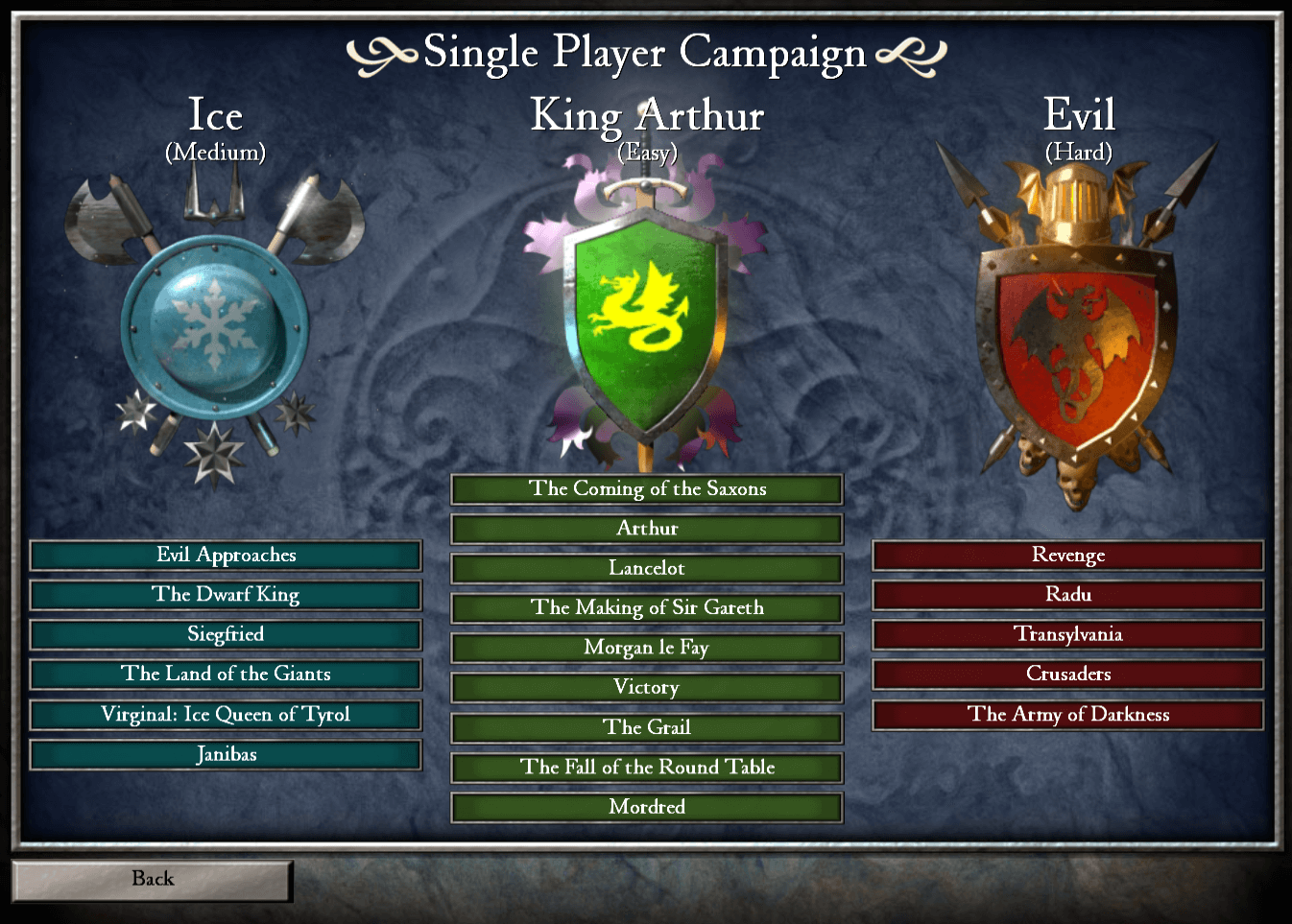 You also play as a faction in The Legends Trails as well, although because these are essentially Skirmish missions you play as a different faction in every mission. The simple fact is, that there's no part of the game that is now untouched by factions. Note however that factions are different to player alliances, as two players can both be playing as the same faction, but in completely different teams, i.e. fighting against one another. Each faction has a set of standard, traditional units available to them, along with faction-specific units which only players of that faction can recruit during the game. The standard troops available to every faction are as follows:

These units are all recruited from the Barracks, and you must have an Armoury placed to store the corresponding weapons for these units. Nothing changes in recruiting these units from how it was done in the ealier games of the series - Archers still require a Bow, Crossbowmen still require a Crossbow and Leather Armour, while Knights still require Plate Armour and a Sword.

Tip: If you are playing as the Evil faction, you will also have Vampiric Creepers at your disposal. These units can convert certain enemy standard units into your own troops, even bypassing all maximum troop limits within the game. The standard units who can be converted are Men-At-Arms and Archers, and without adequate protection from other nearby units who are immune to these attacks, large swathes of your units can quickly be lost to the enemy.

Like previous installments of the series, you still have Siege units at your disposal, although some of these units are only available to certain factions. These are as follows:

As well as Siege Units, the game also provides the ability to recuit Special Units. These units are unique to each faction, and cannot be recruited or converted to another player or faction. However, they can be placed into the hands of another faction at the start of a game by using the map editor to create a custom map. Although this does not work on Custom Skirmish maps, only Custom War ones.

There is also one additional difference to the units in Stronghold Legends while playing as different factions. This is with your own Lord. In Stronghold 2, your Lord would always be exactly the same indidivual, Matthew Steel. In Stronghold Legends, your Lord changes depending on which faction you are using. For Arthur, your Lord is King Arthur. When playing as Ice, your Lord is Dietrich, and you use Vlad while playing as the Evil faction. There are certain conditions which circumvent these rules, for example when you're playing certain missions on the official game campaigns, but for the most part, this happens every time you play the game.

Finally, the only other major change based on your faction is the texture of your lands, including village estates you capture, and the interface colours of the game. If you're playing as Arthur, then your lands will appear green and natural, Ice lands will appear frozen and Evil lands will appear dark. If you capture an enemy/neutral estate, or an enemy captures one of yours, then the textures and buildings placed within the estate will automatically adjust to mimick whichever faction the estate owner is playing as. By default, all uncaptured estates at the beginning of the game will be shown resembling the Arthur faction, but this is in no way linked to any specific player in the game who may or may not be playing as this faction. As you can also see by looking carefully at the below image, the lighting and shading effects also change with some units between the estates when they are owned by players in different factions. 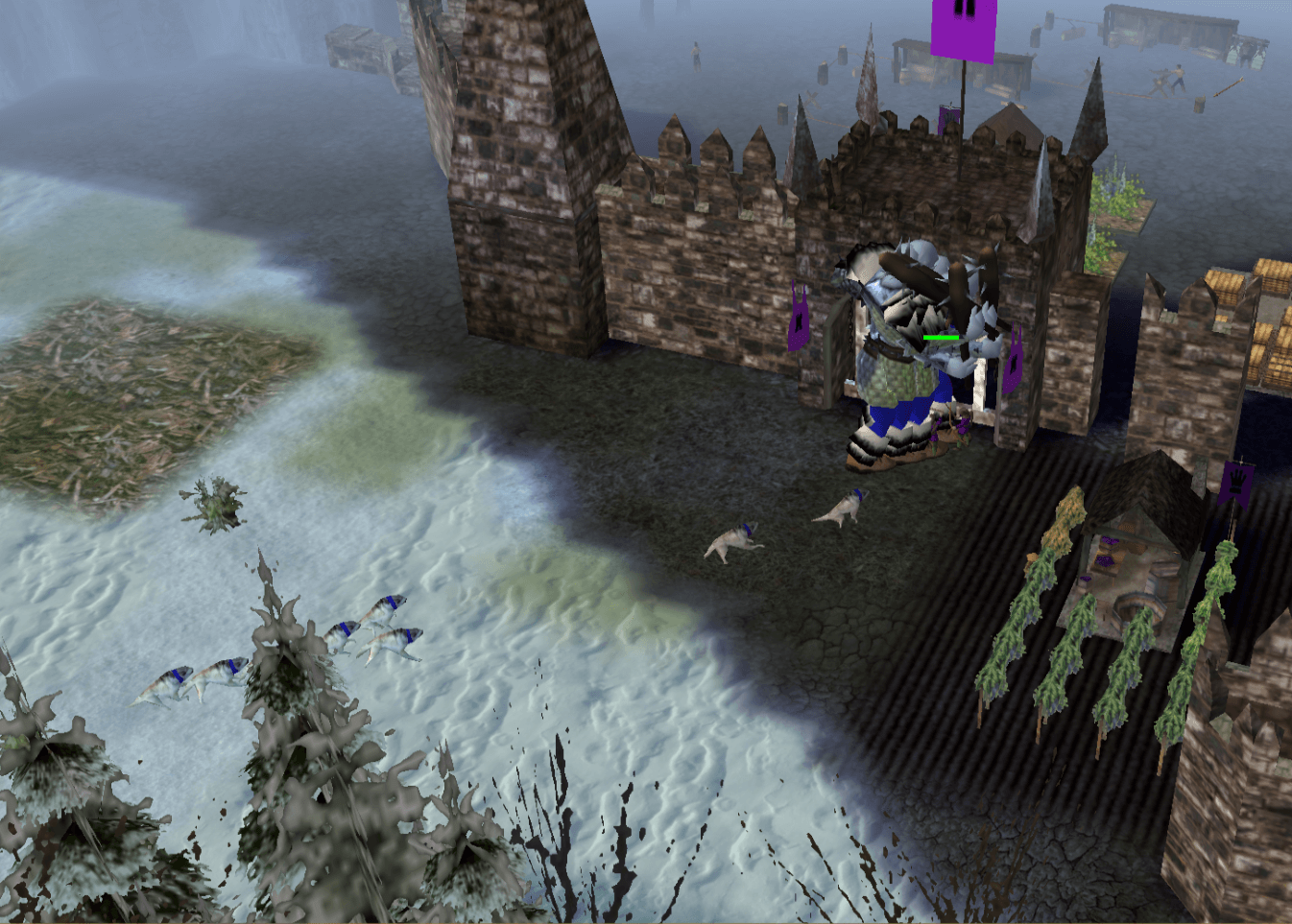 Hopefully, this article has helped you to better understand the available factions in Stronghold Legends, and the different features available within them all.