The final mission of the Stronghold 2 Conquest Trail brings us back to a familiar place: Wartburg Castle. This time though, we're sieging it to take it back from the rebels. You have a number of Catapults at your disposal, which will make things a lot easier. And even better news: your enemy has not reorganised their Castle either, making it a lot weaker than when you defended it in mission 4. Unfortunately however, because the Castle is stationed on a hill you are unable to get the best use of your Catapults until later on in the mission.

Start by immediately rushing around 15 of your Laddermen at the Gatehouse and surrounding walls, sending in all of your Macemen, Swordsmen and Archers to take the first wall. Set your Macemen and Swordsmen onto aggressive stance, so they will automatically attack any nearby enemy units. Take a note of where the rolling logs are, and if possible try to trigger them using one or two Laddermen so that your units will not be affected by them. At this stage your Laddermen are expendable and can't really fight against any enemy units. 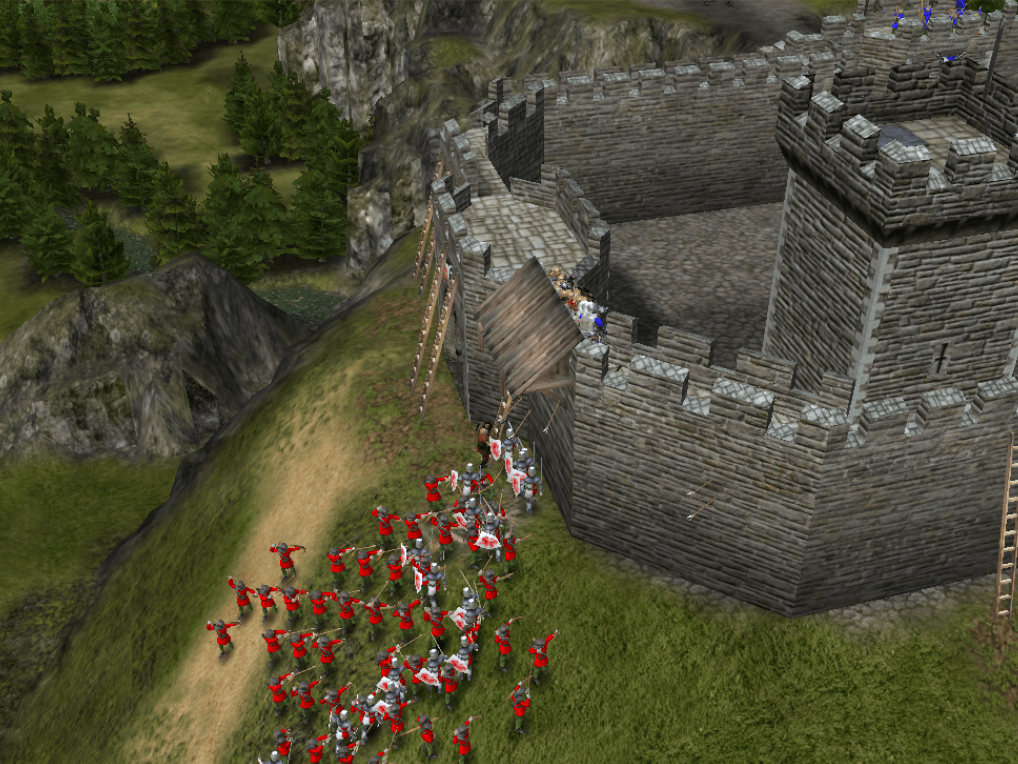 The Pikemen behind the Gatehouse will move up to the walls and start attacking your units- so keep your Archers down on the ground nearby the walls while you send your Macemen on top of the tower to kill off the Archers. If you manage to capture the Gatehouse quickly enough, send your Swordsmen through the enemy Gatehouse to kill all units inside the courtyard. if you don't capture it quickly, simply send them up the wall instead to battle the Pikemen and you can kill all the units that way instead. Note that as soon as you enter the courtyward your men will be attacked by the units stationed on the second Gatehouse. To mitigate this problem, commandeer the tower with your Archers who will kill off those units.

Now bring forth your Catapults, Spearmen and other siege equipment into the first courtyard. Be careful when you bring your second wave of units through- the wall mounted rolling logs should have regenerated by this point, and if you aren't careful they will be activated again as you pass, despite the fact there are no nearby enemy troops. You can use your Catapults to destroy them from a distance so that you can safely pass through this area and into the Gatehouse.

In the meantime as your troops are moving forward, capture the second Gatehouse. You do this by stationing men on top of it, or by moving troops over it while there are no enemy units on top of it. It's probably best to do this with your Macemen who are fast moving. A word of warning however, that by doing this, the Archers from the main third Gatehouse will target your troops once they reach the Gatehouse. Send a few Swordsmen to kill the Archers stationed inside the second Gatehouse (on both sides of it), and you're now in a position to move forward. Remember there are pitch ditches in this area, so this is where your Catapults come in useful.

You can either attempt to rush the wall your with your Laddermen on their own or you can attempt to use your Catapults to take the Gatehouse out from a distance. To do this, you must first destroy the second Gatehouse with your Catapults or Battering Ram (quicker) for a clear firing range. Note however that as soon as you do take out the second Gatehouse then you will also provide an opening for the enemy Archers on the third Gatehouse to fire at your troops in the Courtyard, making it extremely difficult to attack the Gatehouse without being attacked yourself.

Using your Laddermen and what are left of your Macemen, send them to attack the piece of wall just left of the third Gatehouse. Many won't reach there, but a few of them will- that's perfectly fine, because as you can see by the screenshow below the second your troops start to advance the enemy will trigger the pitch ditch. Once the relevant ditches for your attack are cleared (there are three in total), send in your entire army to attack all units on the Gatehouse, and then your Battering Ram to destroy it. 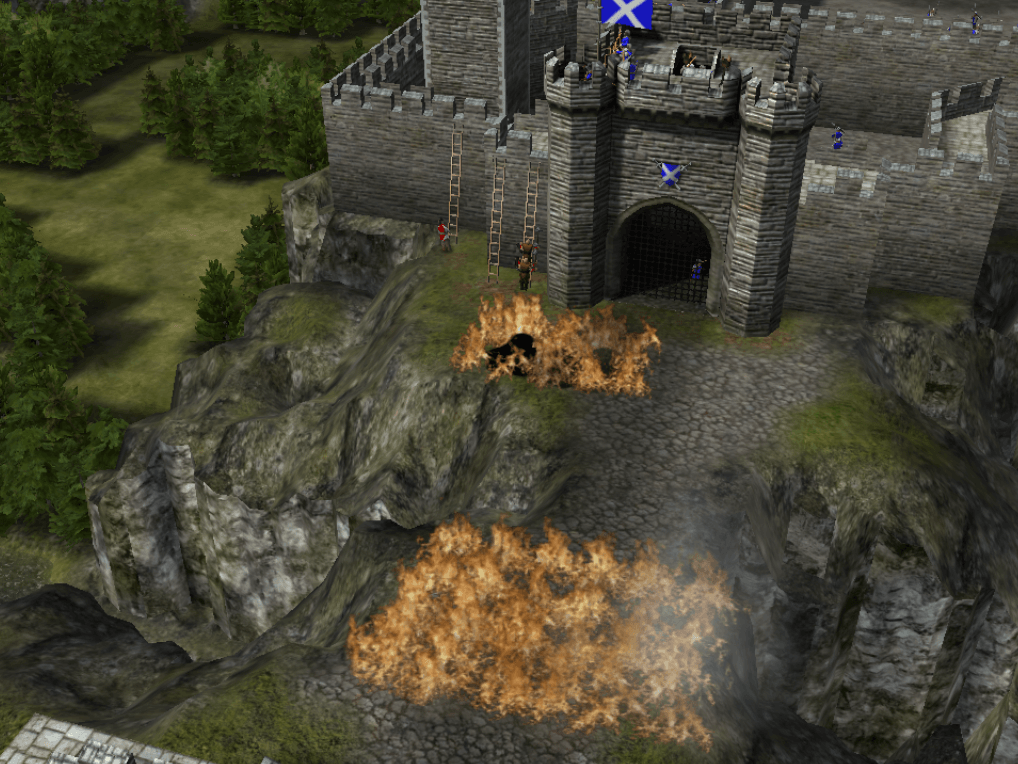 Enemy units may well move and attack to knock down your Ladders, but if you move quickly enough you can counter this. You also have more Laddermen if necessary, and if this should fail you can advance your Battering Ram as well. Once you've taken control of the enemy Gatehouse (which should be fairly easy considering the number of troops you have) then keep your Archers stationed on there for a while with your melee troops preventing access to the Gatehouse. This will do some serious damage to all enemy units in the vicinity with minimum damage to yourself. Once the courtyard and surrounding wall is clear of enemy Archers, bring forward all your siege equipment.

Now, use the enemy's own walls against them- send your Archers around by the Lord's Kitchen and start attacking the Spearmen in the next courtyard as well. You can actually reach some of these on the third Gatehouse if you don't want to move your units. Once this has been done, start attacking the thin wall left of the Lord's Kitchen with your Catapults. This is the easiest way through to the final courtyard. While you're moving however, be watchful of the Eingeer stationed on the nearby fourth Gatehouse- he has a pot of boiling oil which can be used to do a lot of damage if left unchecked. Send in your melee units or kill him with your Archers before advancing further.

I recommend using both your final Laddermen and Battering Ram to take care of the final Gatehouse- if you move any further forward with your Catapults, they will be attacked by the Archers on the Gatehouse or from the wall to the far-left if you haven't already taken them out. Once your Laddermen have reached the wall, rush in with your Spearmen and send them on top of the Gatehouse, then send your slower-moving Swordsmen in who will deal damage to any melee units. After this, send the remainder of your Archers on top of the Gatehouse too. 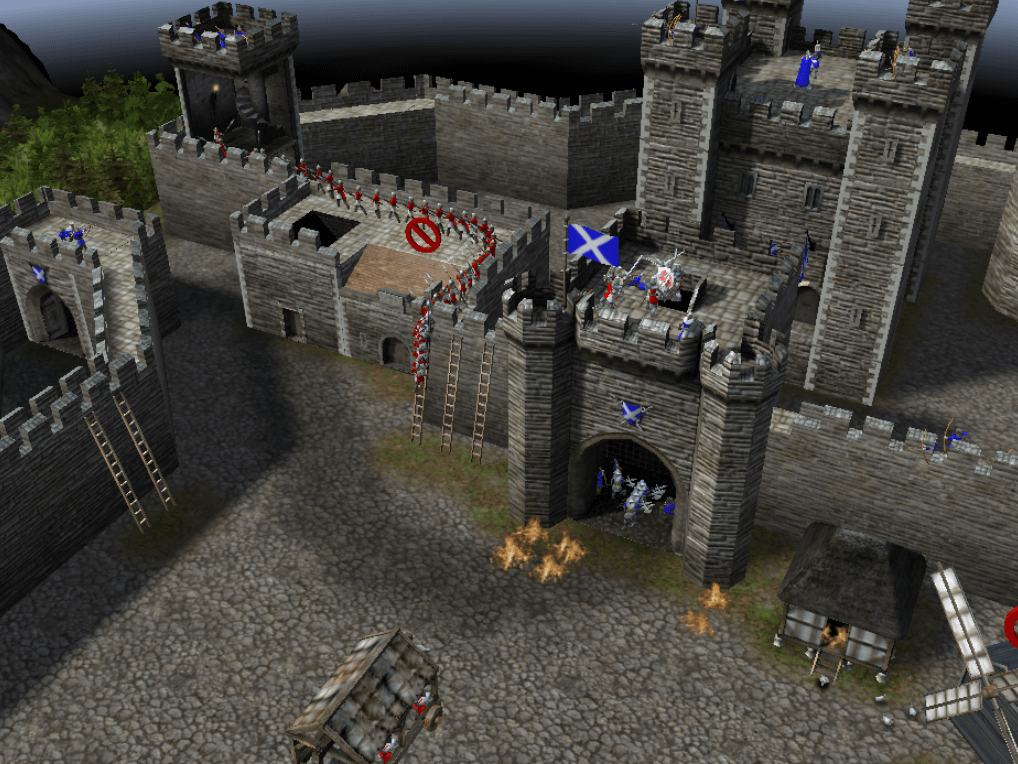 Kill off all enemy troops who are a threat to you at this point, storm the Keep, kill the Lord, and take the Castle! Your Swordsmen are strong and durable, and will survive almost any attack at this point from any stray enemy Pikemen or Swordsmen, providing you keep them together as a group. Any Archers will be quickly disposed of when you get close enough. Congratulations on completing the Stronghold 2 Conquest Trail, M'lord!