In this mission you must defend Harlech Castle. First of all take a few moments to examine your new Castle. It's fairly well constructed in comparison to some of the others you've defended. The outer wall does not interconnect with the inner wall other than through the main Gatehouse, which is good news from a strategic point of view, but because there is still a link it means enemy troops can jump straight onto your second wall unfortunately. Your enemy also has a very large number of Archers, which will undoubtedly make things difficult for you.

Start by moving your 4 Knights (down by the river) into your main Castle courtyard. This will go some way to offsetting some of the damage done by the enemy Archers. Next, move the Pikemen nearby your Hovels into your main courtyward as well. No attack will come from the left of your castle, so it's a waste in keeping those troops positioned there. Also move the Archers positioned on the nearby Gatehouse to the front of your Castle either on the main Gatehouse, or the surrounding first wall. Now, if you scroll behind the Lord's Kitchen, you will notice a group of Crossbowmen and Archers. Well positioned to defend your Lord stationed atop the Lord's Kitchen, but not exactly the best use of them. Order them to the Lord's Kitchen where they will prove a much better use.

Almost immediately the siege will commence, with burning carts sent out first. If you follows the instructions to re-adjust your units, you will likely find that these are destroyed very quickly and easily. You may also find that your Archers are firing down upon the stationery troops near the siege camp as well. At first focus on targeting the siege equipment and particularly Catapults, until the units begin to move. As soon as this happens standby with your rolling logs- these have the immense power to dispatch a large number of Archers if you use them quickly enough, so wait until a large group of Archers have started to gather and release them, one set at a time. Also keep an eye out on the left side of the Gatehouse, because some sneaky Laddermen will try to reach that less well-protected area. The good news is you also have some rolling logs to wipe these out as well. If a ladder does sneak through however, just move a few Archers nearby to where it's stationed, and they will automatically push it down again. 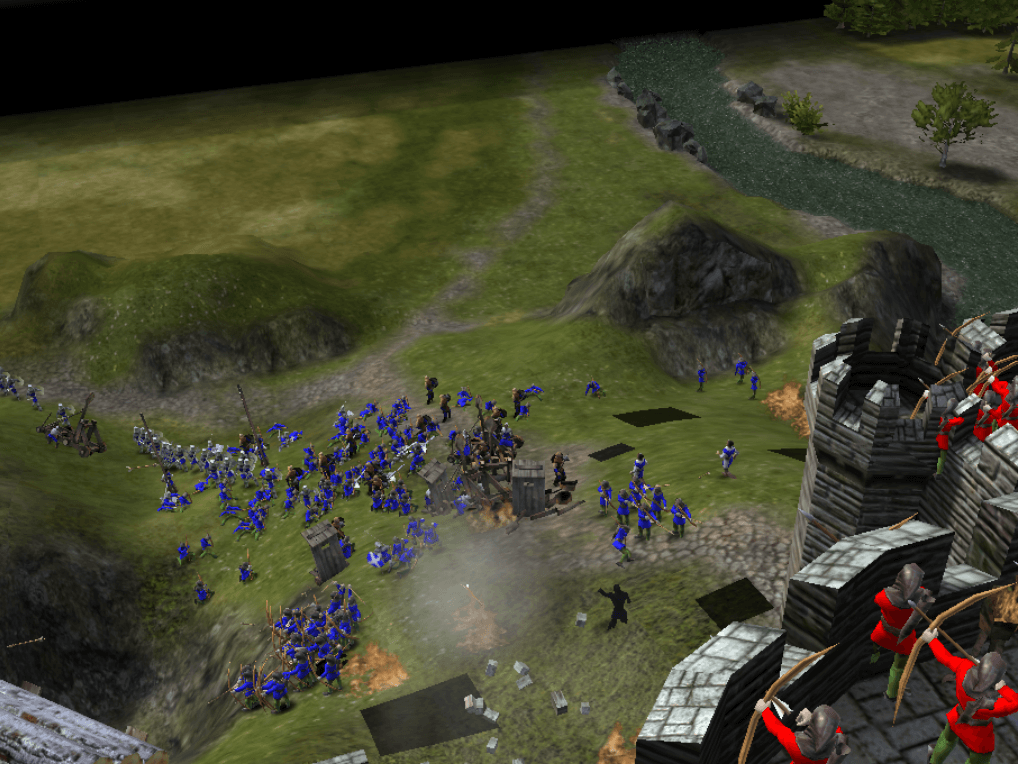 At this point you're probably running out of troops on your first wall- so keep a watchful eye on pitch ditches and while the enemy are moving, light up some pitch ditches using the troops from the Great Tower left of your Gatehouse. You can also take troops off your Gatehouse and place them in one of your Towers to protect them from ranged attacks, while your Archers can still fire from there at the enemy. This should just about finish off most of the units that survived from the earlier use of wall mounted rolling logs. By this point, any remaining Catapults will likely have breached your first wall, and Laddermen will probably be getting through. I'd recommend moving some Macemen onto your second wall here to push down any ladders that inadvertedly get through. For some bizarre reason however at least on my game, after breaching the first wall the laddermen placed ladders against the first wall, but from the inside of my Castle. This meant the Swordsmen had to go all the way around my Castle on the outer wall to reach the inner wall, which provided valuable time to attack them.

If the battering ram does manage to reach your Gatehouse, don't worry. It will probably destroy your first Gatehouse, but just send some Swordsmen out to destroy it before it reaches your second. If you're unfortunate enough that the enemy units do manage to scale your second wall, move your Lord towards the area of your Castle which is covered by man traps and killing pits- this will buy you some time while the enemy troops are moving. Make sure all remaining Archers can reach the attacking enemy units, and focus all of your firepower on them. You may also wish to send in your Macemen to buy more time, depending on how many troops breach your Castle. Another useful tactic is to set all your melee troops to aggressive as well, because they will automatically head to any nearby enemies and attack them.

The sheer number of troops will eventually be worn down by your Archers, but for now you should use as many delay tactics as possible. Note that when you move your Lord, the enemy troops will automatically refocus on where he is and will follow him- so keep aware of this fact, and make sure you still have enough troops in the Courtyard to defend your Lord while your Archers attack all enemy units.

The traps work very well in killing off any rogue Swordsmen who slip past your Knights and other units in the Courtyard. Keep fighting just a little longer, and eventually you will come out on top. Phew, that was a close shave!