Castle Quote
You are powerful, you are rich, but are you happy?
Diplomat
Stronghold Warlords
Site Search
Game Navigation
Newest Gallery Images

Your task is now to siege Haut Koenigsburg. This is a tough mission, particularly as you don't have a large number of ranged troops at your disposal. However, you do have Catapults, which are extremely valuable providing they are kept at a long distance away from the walls.

First off, take as long as you need to examine the castle. Even a superficial look will tell you that the weakest spot is in the center, and the strongest is the right of the Castle with a number of towers and a lot of ranged units. You simply can't fight this kind of power with what you have, so you will need to go around it, and try to take it out piece by piece.

The easiest place to attack first is near the Stairwell in the middle of the first wall. Start by moving your Catapults to a reasonable distance away, and using the "attack" button, instruct your Catapults to attack the wall where the Archer is stationed. It's important you do this because you'll likely find without using the attack button, you are unable to attack the wall. You'll inevitably take a few hits from the Archer, unfortunately, as you have no Cats to protect you. But you will knock him off the wall very quickly. 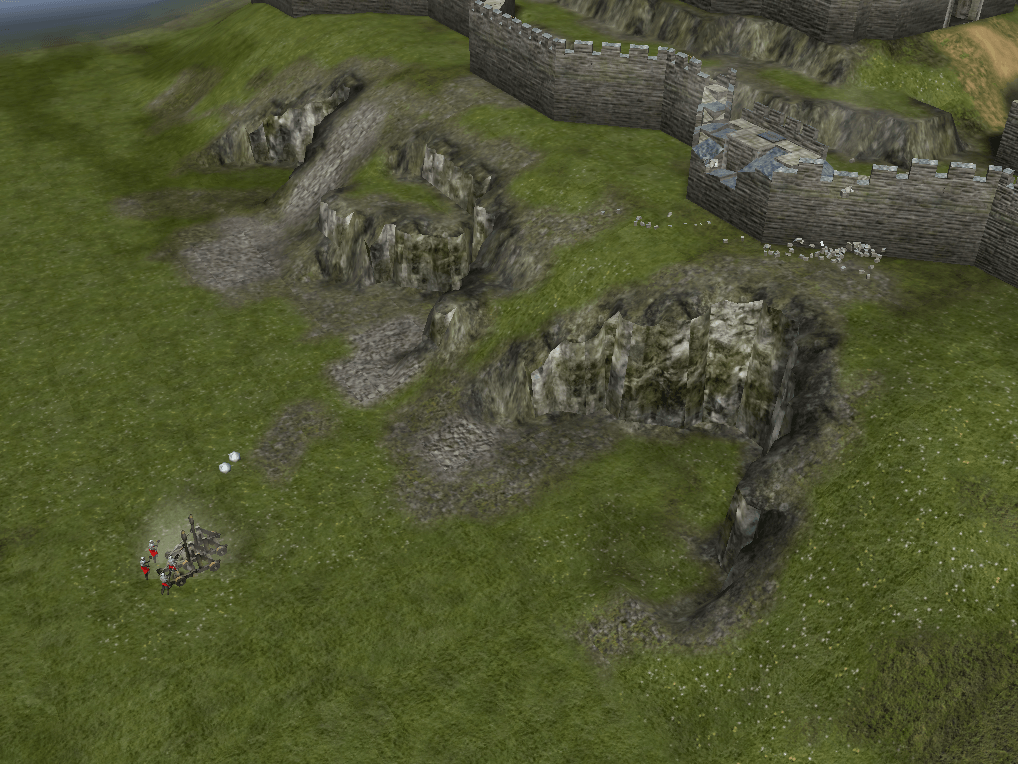 Once this has been done, set about destroying the remainder of the wall nearby the Archer. There's no timelimit on these missions, and it's far better you get this done correctly. Once you've done this, repeat this process for the Archers on the left and right of the Stairwell as well. Knock both these Archers off the wall and do a bit of damage to the wall as well. If possible you should create a breach just in front of the Gatehouse, which will allow you to nicely rush your troops into the Castle.

Sadly, probably despite your best efforts, one or both of your Catapults have probably now been destroyed. That's ok, as for the next part of the attack your Catapults won't really be useful anyway. Take around 25 of your Ladderman, all your Macemen, Archers, Crossbowmen, Swordsmen and Spearmen to one side. This will be your force to attack the structure inside with all the Archers stationed on it. Sadly, you sustain so many casualties when attacking this it's impossible to designate a smaller section of your army to deal with it- you really do have to throw everything at it. First of all, send in your Laddermen, accompanied by your Spearmen, with your Macemen slightly behind them both, your Swordsmen behind those and your Archers behind that. If you're concerned about the damage to your Laddermen, provide the instructions to your Swordsmen first, your Macemen second, Laddermen next and then your Spearmen to keep them in equal balance while moving to the target (or at least to balance them as equally as possible). Before you send your troops in, you should put them all on aggressive stance.

Tip: It may help if you slow down the game speed while you attack here, using the available keyboard shortcuts in the game. This will allow you to slowly coordinate your army and react while the game is moving less quickly, likely to result in better coordination and less damage taken by your own troops.

Once your Laddermen reach the Gatehouse an Engineer will pour some boiling oil over you, so do not be surprised if some ladders are destroyed by fire. Send all your Spearmen, Macemen and Swordsmen up onto the walls, and work your way around them killing all of the Archers as you go. Enemy Pikemen nearby will also climb up your ladders, so be aware of this fact when sending your troops in as you will also need to fight them off. If you haven't already move your Archers and Crossbowmen in now and keep them near the breach in the first wall, firing at all the nearby enemy units. 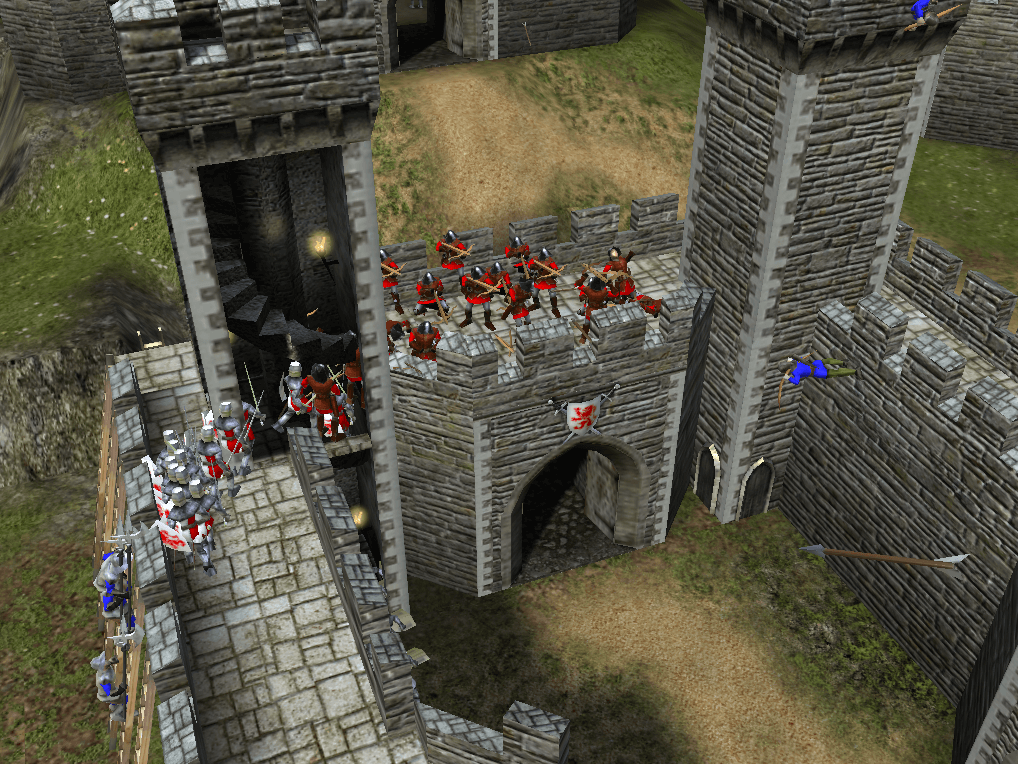 This will kill a lot of your army, but you have finally managed to capture a foothold in the castle. Now that you've captured this section of the castle, you are free to move towards the Keep easier. A word of caution however- as tempting as it may be, do NOT attack the towers to the right of where you currently are. Doing so will waste valuable units that are extremely important to use in fighting your way to the Keep. Instead, move all of your troops to the left of the structure you are currently on, so that they are out of range of the Archers. Send your Archers and Crossbowmen on top of the Gatehouse adjacent to Gatehosue leading to the Keep, who will take care of any ranged units nearby. And in the meantime, sned in your battering ram.

As soon as you reach the gatehouse here, some enemy Pikemen who are on aggressive stance will approach you and attack you, so make sure that your melee troops are nearby. You can also send in any remaining Laddermen to the Gatehouse next to the Keep to allow faster access to the walls. Your battering ram will quickly demolish the gatehouse, at which point you are free to charge to the Keep. Remember- you only need to kill the Lord here, not achieve total victory. 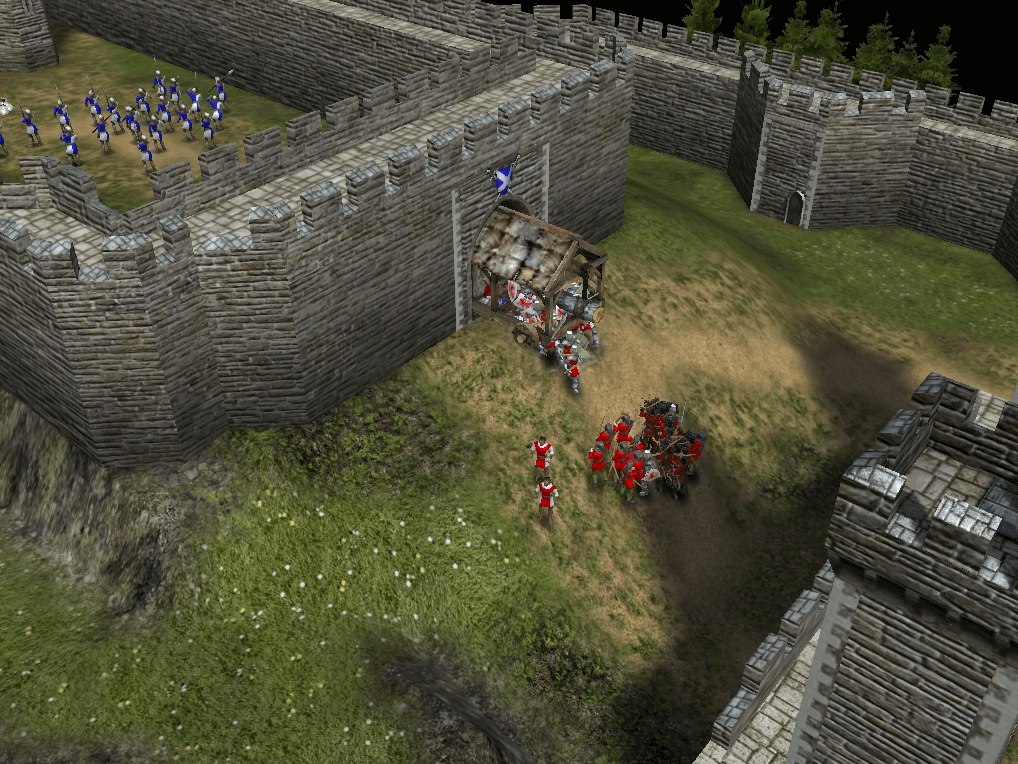 Start by moving your Archers and Crossbowmen to target the Spearmen in the courtyard. This will spring them into action and you will quickly kill them all. Then move your Archers and Crossbowmen to where the Spearmen were stationed. Note that while your Archers can reach units on top of the Keep, your Crossbowmen cannot. However, your Archers will automatically begin firing and this will bait the units down from the Keep. Simply move your Swordsmen nearby and wait until the enemy units arrive down from the Keep before springing into action. At this point, take your Swordsmen (and any other melee units you still have) off aggressive stance again. Do not make the mistake of sending your Swordsmen directly to attack the Lord, because the Archers on the nearby Great Tower will target them and do some serious damage.

Once the Swordsmen have started attacking you, your Crossbowmen take care of them while your own Swordsmen defend you. Once they have cleared, the path to the Lord remains open. Send all your melee units on top of the Keep, and by this point, the Lord will be no match for you even with the help of the Archers. For extra support, you may wish to also bring your ranged units up onto the Keep as well. Victory!

Download your saved game of this mission here from the downloads section.