Stronghold 2 provides a new and unique experience of being able to siege or defend various historical castles, and the first of which is to defend Guadamur Castle in Spain. The objectives are essentially total victory on all of the Conquest Trail maps you defend, and for the ones you siege you need to kill the enemy Lord. Although total victory is more fun and challenging.

Starting the mission you will see that you're in charge of the defence of the Castle. With very little time to react before the siege begins, you must quickly compose yourself and your troops. Since the layout of the castle means that there is no way for enemy troops to get around the back of you, start by moving all of your troops from the rear walls towards the front of your castle to fight off the attacking force.

Gatehouses and Towers form excellent choke points on this castle, and I would prioritise placing troops on your second Gatehouse (the largest one). This will provide a bigger defence for your castle while you fight off the attacking forces. You also have a number of other defence systems at your disposal such as rolling logs and stone tippers which can cause a great deal of damage.

Tip: If you feel like you don't have enough time at the start, you could always pause the game temporarily while you gauge the landscape and examine at the defence of your castle for the best choke points. To do so, simply use the keyboard shortcut "P".

Next, head straight over to the first of your gates, where you will notice a pitch ditch. Let the first few Burning Carts and other siege weapons get destroyed easily by your larger groups of Archers, and prepare yourself for when the approaching enemy army will send in its troops. As soon as you've done this, immediately activate thr rolling logs on the right of the first wall, and some of the enemy troops should alos be sputtered away. 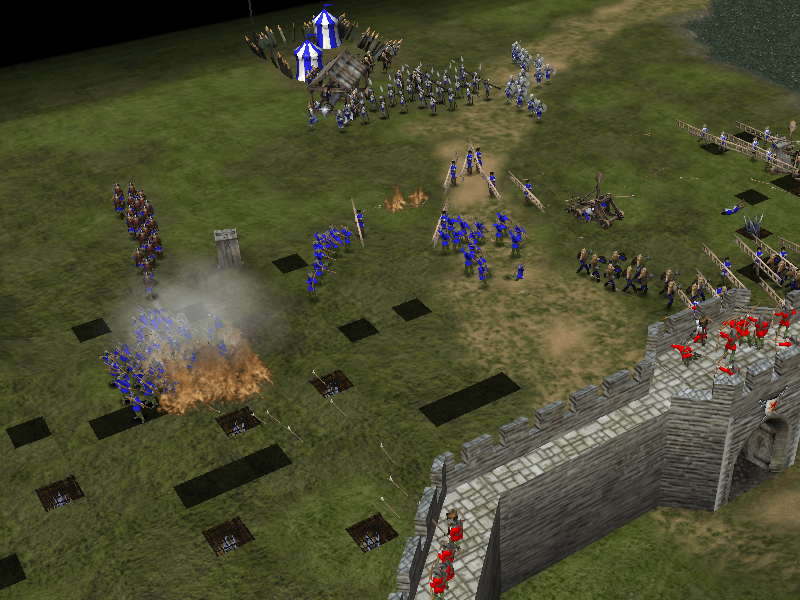 Your first wall will soon fall under the pressure from the laddermen, so once you've done this, pull back your troops to the second gatehouse and group them there. It's important to do this as quickly as possible so that you save the maximum number of troops possible. Note that the first and second walls are interconnecting, thus meaning once the enemy has breached your first wall, they will automatically gain access to your second wall. Don't panic, but make sure that your Archers are grouped in towers and on the Gatehouse, rather than standing idly on the wall. You will also want to move the Pikemen from behind your second Gatehouse onto the top of it instead, to slow down any attackers. 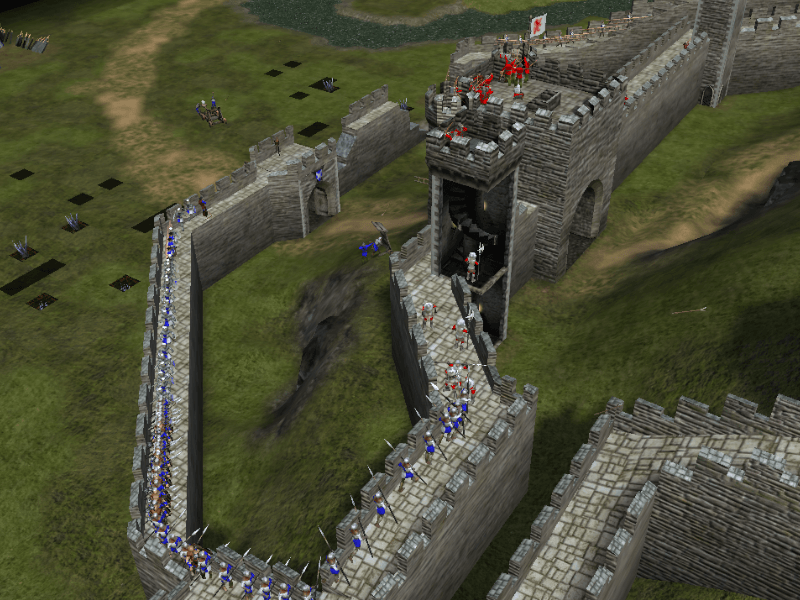 Once the masses become so overwhelming (i.e. the example above) then move your slower moving Crossbowmen back to your third wall. For this it will take slightly longer, because the third wall isn't connected to your second wall. Hold your Archers for as long as you can, and then quickly retreat them back to the safety of your third wall as well. While you do this, make sure you keep an eye on the outside wall to the left of your Keep- and also move any troops from that wall over to your third wall.

Surprisingly, your Pikemen will crush most of the attacking infantry and buy you valuable time while you move your troops. By this point, your second Gatehouse will likely have collapsed due to the Battering Ram. Your immediate priority now is to focus all of your ranged units on the Battering Ram and destroy it before it can advance up to your third Gatehouse. Once this has been done, you will probably notice that the enemy has taken the slightly perculiar path of heading around your castle, rather than to your third wall. This is because the enemy can head around your wall.

Unfortunately as your third and fourth walls are also interjoining, your options of retreating backwards can no longer work, because the enemy will use the Stairwell on the third wall to gain access to your fourth, and therefore get to your Keep. You must therefore stand your ground. Move your Pikemen from both remaining Gatehouses to block the Stairwell against any of the faster moving infantry, and retreat your Crossbowmen to your Keep. For the time being, keep your Archers stationed where they are, although if you can move them around to temporarily fire at the Swordsmen as they move around, this would be beneficial.

Tip: Instead of blocking the path to the Stairwell, you may choose to take the fight inside the Stairwell and use it as a choke point to cut down some of the enemy Swordsmen. Doing so will drastically increase the amount of damage done to the Sowrdsmen, and also increase the damage handed out by your Pikemen and Archers. Once the Swordsmen are inside the Stairwell, pull your Pikemen out the top, take them off aggressive stance and your Archers will begin to fire again. 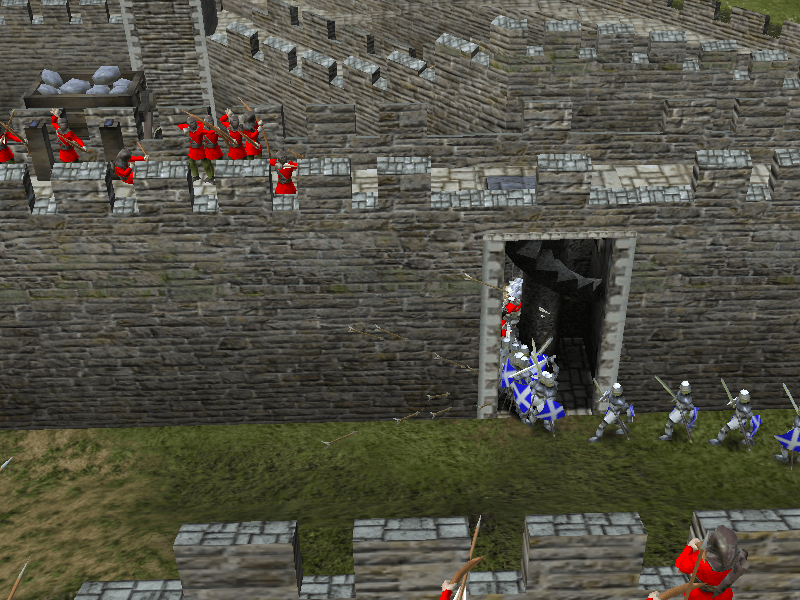 At this point, you should have just about defeated all of the enemy troops. If however you've been unlucky and there are still some troops remaining, pull all your Archers back off your third wall and ontop your Keep. Keep your Archers on your fourth wall, until the Swordsmen get within a relatively short distance. Swordsmen are strong but your Archers will gradually wear them down over a distance and you will eventually be victorious. Thank goodness this poor excuse of a castle has been successfully defended!

On one last note, make sure that you save your game before ending this mission, as your game does not automatically save by itself when you complete a mission. You can also download a saved game of this mission here from our downloads section.