The Road to Hell Mission 4

This mission is exceptionally tough, although it may not actually look like it when you first load the map. You are faced with two opponents, Siegfried and Dietrich. Dietrich is significantly weaker than Siegfried in terms of strength (although it may not seem it), so I would recommend taking him out first, when you are in a position to do so. All you can do for now is build up a defence so start by placing your Stockpile next to the Iron within your own estate. You will then have to capture the additional estate nearby and get that to produce your Stone for you.

The main benefit of placing an Iron mine in your own estate is that Iron sells for much more than Stone does - and you will likely have to do this a lot throughout the game in order to just survive. Site your Granary to the other side of the Iron where your stockpile is placed (should be in the gap of the mountains). Start off by placing one Iron Mine, an Ox Tether, a Dairy Farm and Apple Farm for your Granary and finally, place the free Wood Camp. Next place an Ice Tower and sell all the Flour in your Stockpile. Buy wood and stone until you can place both a Barracks and Armoury and place an additional wood camp, hovel and several other food production buildings. Now set your ration level to Extra and increase your tax level as high as possible.

While you're doing this send Dietrich to capture the nearby estate which you will use for Stone production (the secluded one in the corner of the map). Place a further apple farm, seal hole and hovel then look to start building up an army. Recruit as many Archers as possible and get them atop your Keep, as a few small groups of enemy Archers will attack you. When you have a chance, place more Iron Mines and Ox Tether in order to retrieve more Iron, but remember to keep an eye on your food production - and population. Keep everything as compacted as possible and close to your keep in the same clearing.

Frost Giants will repeatedly attack your settlement from Siegfried and Dietrich will send droves of White Wolves to attack you, so unless your buildings are centred around your keep they will be destroyed. Once this happens it will be extremely difficult to build up your economy again. Remember that you can also use Dietrich's special power to summon several Shield Maidens if you are stuck. You must try to build up your wall a small bit at a time - but build it not just around your keep but also enclose your industrial buildings. Sell whatever Iron you have, and recruit Archers. Place these on your keep and consistently repeat this process as much as possible.

You also should purchase as many Polar Bears as possible through your Ice Tower. While Archers are useful for attacking enemy troops with arrows, Polar Bears can attack them on the ground, both doing damage and preventing them from attacking your own buildings or wall. My Castle looked like this: 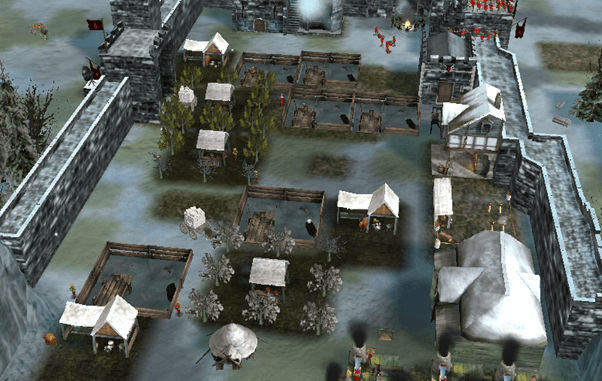 You will consistently get these invasions, so you must keep your number of archers and Polar Bears topped up all the time and make sure that you lure the enemy troops away from your buildings. There is no point in actually placing any weapon workshops unless you particularly want to - but I found this was an unecessary use of resources when you can buy bows just as easily with the Iron you get that you won't use. You will eventually have your estate overran by Siegfried.

Once this happens, leave it unless you are particularly confident that you can retake it and hold it without damaging your own castle defence. You will eventually receive a full siege, probably by Siegfried first. This is the toughest of the two, but if you have followed the advice of consistently selling Iron and purchasing Archers, you should be well on your way to around 40-50 archers by the time this happens and around 10 Polar Bears. This won't be a problem to fight off at this point, providing that you have your wall fully constructed and several Archers placed on there as well as your keep.

If you do have enough, place additional Ice Mirrors along your frontier to slow down the approaching Frost Giants. If the attackers to manage to get on your wall, there is very littel that can be done, unfortunately. Therefore it's imperative to delay and kill as many troops as possible before they get to your wall using whatever you can get. I keep Polar Bears outside of the castle entirely and use them to fend off Frost Giant attacks - they only ever come from the direction of Siegfried and Dietrich's attacks can be prevented with Archers alone.

In this example, I used around 20 Polar Bears. Once you manage to defeat this, that is the toughest invasion you will face. You can alternate between both walls with your Archers for each invasion until you have enough troops for both. You should be able to replenish your lost Polar Bears by now by selling Iron. Honour should be in a good supply.

If you feel like you can spare troops to recapture your estate, purchase Polar Bears, Frost Giants or White Wolves - or a combination of all of them - and send them along to recapture your estate. Once you've managed to stabilise your situation, you should look to start attacking Dietrich. Although his Army is the worst, his castle is the most strongly defended. All you can do is attack with sheer numbers of Polar Bears and Frost Giants who will attack the walls. Give particular attention to the lookout towers, gatehouse and then barracks. 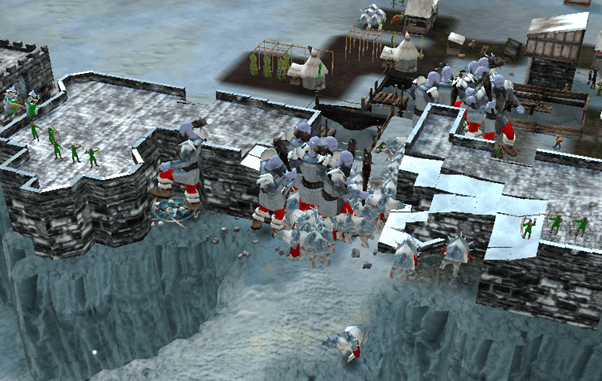 In this example, I attacked with 68 Polar Bears and 13 Frost Giants. Once through, set your troops to aggressive and let them target buildings. Give particular attention to the Ice tower, Armoury and Granary. 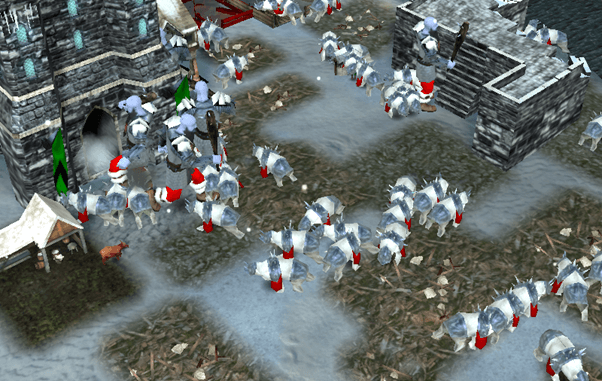 Keep your troops attacking buildings, and recruit around 30 White Witches. Send them over and kill Dietrich from the skies. One down, one to go! Start by moving all your Archers over to your right-hand wall and returning all your troops to your castle. Capture the estates which haven't already been captured, and then move all your troops next to the bottom of Siegfried's estate.

I'd recruit around 20 more Frost Giants and as many Polar Bears as you possibly can before advancing. Simply apply the same strategy, although this time you can breach the walls much easier as there is more space to attack them. Attack the lookout towers first as they have Ice Queens stationed on them who will freeze your troops repeatedly until killed. 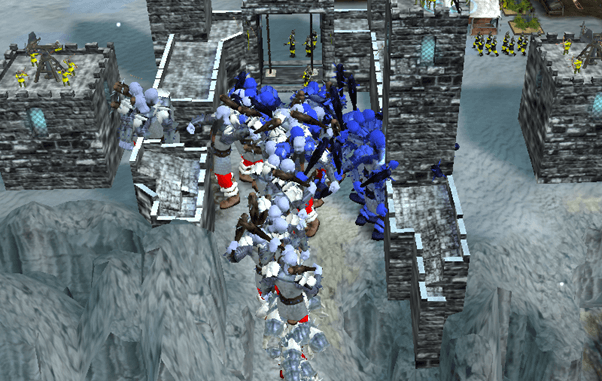 Once in, simply use the exact same strategy again killing off all Siegfried with White Witches after destroying as many buildings as possible. Victory! 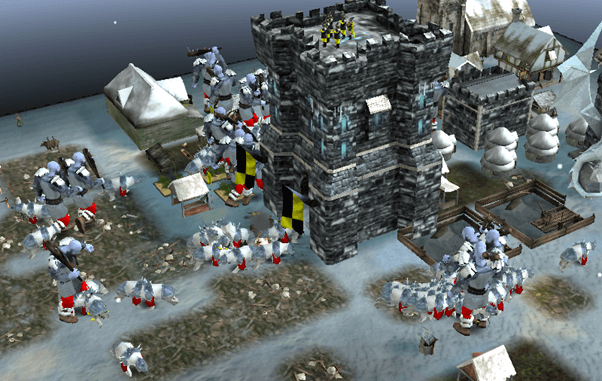 If you particularly struggled on this mission a saved game has been uploaded to our download section and is available here.