The Road to Hell Mission 2

Here we are, at what appears to be one of the most difficult situations possible for a Skirmish - where each Lord is considerably stronger than yourself. Luckily, this is a 2v2 skirmish where your ally is the Evil lord nearby. Start off by placing your Stockpile next to the Stone & Iron, and your Granary next to the trees. Then place two Iron mines, a stone quarry, wood camp and a chicken farm. Buy enough wood to place a Hovel. Place your Barracks along the wall that comes from your allied estate, and your Armoury next to your Barracks. Place your Sorceror's Tower next to your keep also, and finish as much of the wall as physically possible at this stage. At this stage I also started by sending Vlad off to conquer a few of the dormant estates nearby that were taken by opponents.

Buy more wood, and place an additional two wood camps and three more hovels. You'll also probably find yourself with a Frost Giant attacking soon too, so prepare yourself by purchasing five werewolves, a Sorceror and using your existing men-at-arms to fight him off. You should by that point have more wood, in which case use it to place another stone quarry, two ox tether and an additional two chicken farms and one dairy farm. As quickly as possible recruit around 9 werewolves and send them to guard some of your nearby estates. Then finish your enclosing wall with gatehouse, and start to rectuit some werewolves. DOn't forget to keep a close eye on your ally - your survival at first very much relies on them and you must protect yout ally from any attacks.

Recruit around 20 Archers (purchase the bows you need by selling available Iron) and several Werewolves, and send them straight to your Allies' front to protect your wall. If that falls, so do you. Also concentrate on generating more honour, by placing a Castle Kitchen (Pantry) and by placing some food production buildings for it, you will gain more honour and this will help you to train more special troops you can use. Attacks will soon start coming in thick and fast, so you must make sure you have the troops to defend your frontier. Sell anything you need to, in order to recruit more Archers, Werewolves, Hell Hounds .etc. to defend the wall. In the event that the gatehosue is destroyed, it is exceptionally difficult to get it replaced. In this instance, setup a carter post which can deliver stone and other resources to your ally. Chances are, the wall will get destroyed as badly as this at some point, and you'll need a strong defence: 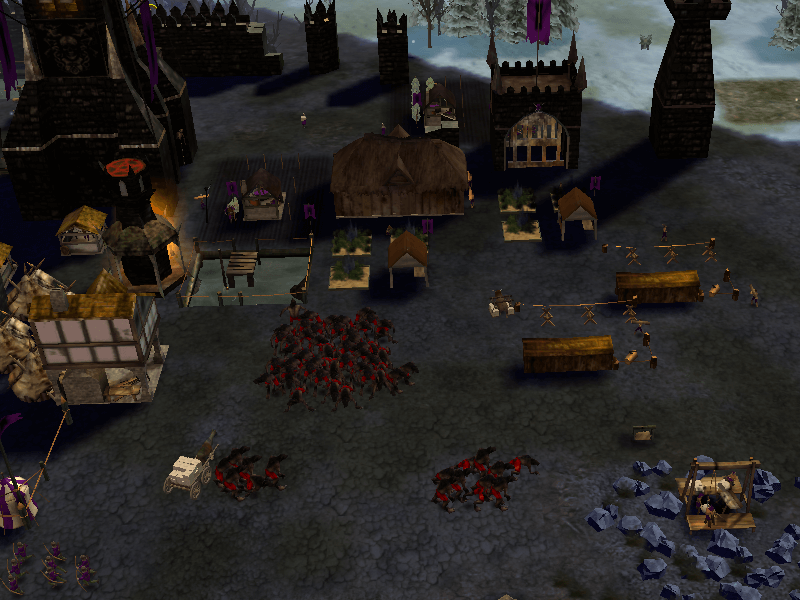 Recruit as many werewolves as possible to fill the gap - in the above image, I have roughly 50. When you get to around 80, prepare to launch an invasion on Dietrich's Castle. This will buy much needed time to restore some of the wall and for your ally to build up their troops again. Wait until your ally recovers and send an attack, then send in all your werewolves over the ladders, straight to the keep. One down, only Siegfried to kill now! 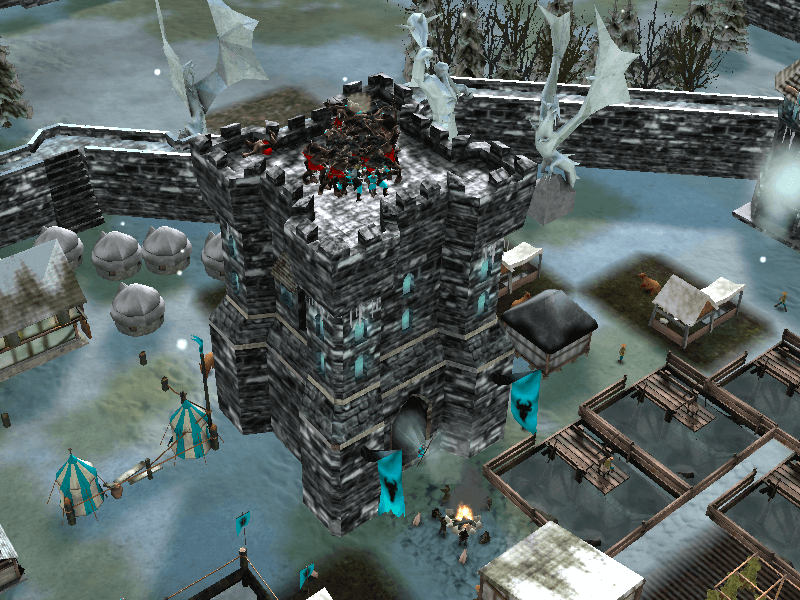 Send your werewolves straight back to your Allies' wall, and try to recruit more troops - sit dormant for now. Capture any remaining estates, fight off any Frost Giants who will attack you, and most importantly of all, recruit as many werewolves as possible. Wait until your ally next launches an attack, and there's the time we waited for! Send all your werewolves in and finish off Siefried too - mission complete!

You can download the saved game for this mission here.