The move ship event is very useful for moving boats in the editor - whether you want to use a lifeboat, a trade ship or even make a live wreck on your map, this is all possible in the Stronghold 2 editor. We will also take a look at more complicated things, such as setting up routes for your ships, adding delays and even having invasions arrive from ships.

Before you setup any events, you need to place markers. These will tell the game the entry point of the ship, as well as what path it should take. The flag colours and numbers do not make any difference. However, I do advise you keep something easy to remember, such as the following: 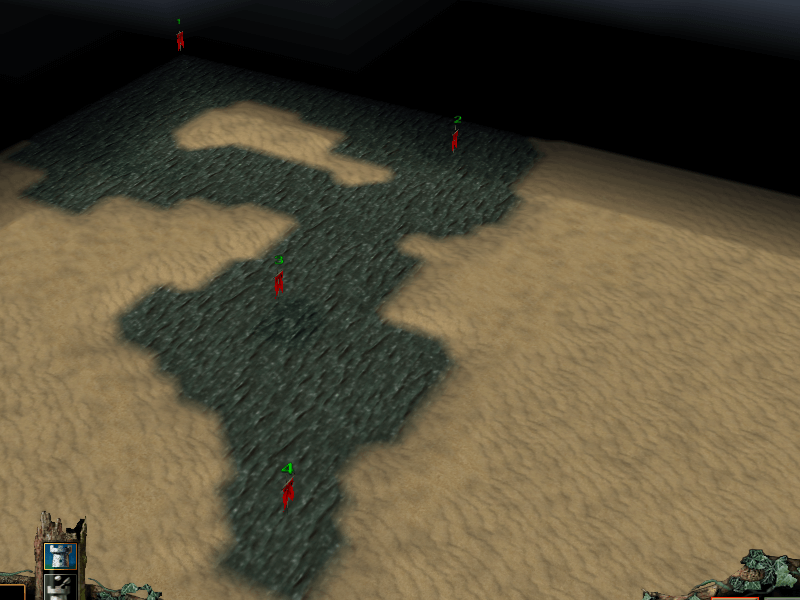 In my example, the ship enters the map at marker red 1, moves along and then reaches the beach at red 4. Now we need to setup our event. Go to the triggers and events screen, and add a new event. Set the condition to "Always" and the event to "Move Ship". After doing so, you will see this screen: 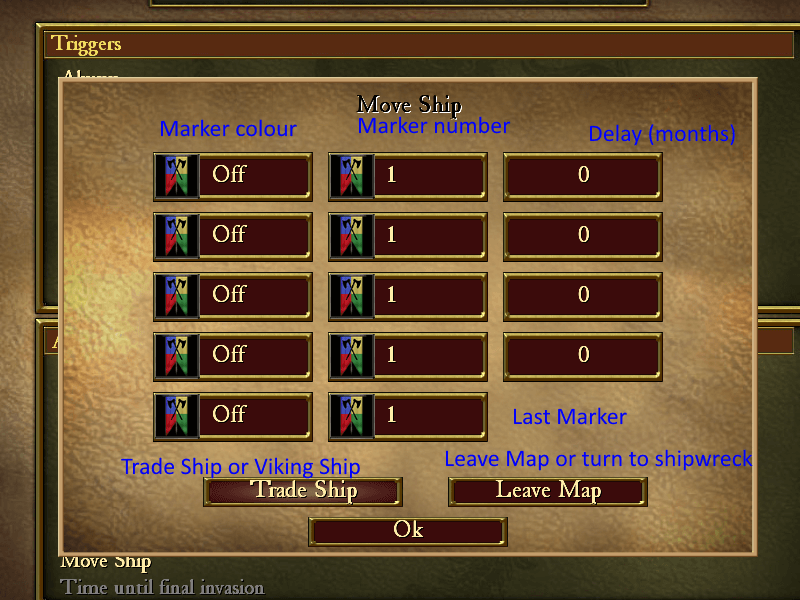 Now you need to simply set the marker flags as shown below: 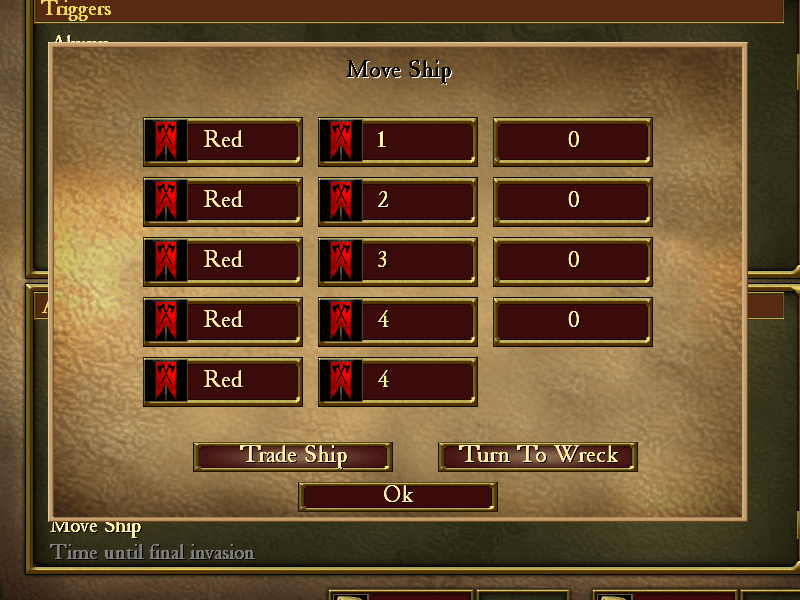 The ship travels in straight lines between each destination, and it does not not move out of the way of obstacles. This means that you need to plan each step of the journey carefully. Note: Never use the same marker for the entry point as well as the first marker. If you do, the ship will not appear on the map. If all the points are not used, then the game will send the ship to the original marker.

In the vast majority of cases, this is no problem at all. However, in a very small minority of cases it can become a big problem. Unfortunately however, the only solution to remedy this is to set all marker points. On complex maps, this can very easily become a problem. Without any points free, there is no choice for the game but to use all of them. There is one alternative to using all of the markers however - you can make the ship return from the path is came from in the first place.

By making the ship return, you save the otherwise needed markers and still get a good effect. Further timings are also not necessary because you already know what path the ship will take. Another thing which is useful about ship events is the fact that you can make the ship delay up to 100 monhts on any given marker flag setup. That is a total of 8 years and 4 months in game time. The only point of the journey which cannot be delayed is the last point, which is because the ship must either leave the map or turn to a wreck at that point.

There are two types of ship in Stronghold 2, and these are either a standard Trade Ship or a Viking Ship. 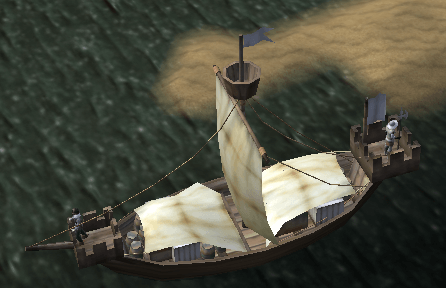 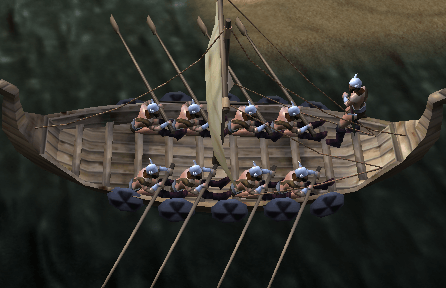 The Trade Ship is by far the largest, and this is the ideal choice of boat if you would like to represent settlers arriving on an island, or giving/receiving goods from an ally, etc. The captain, who we also assume is thr trader, stands on the front of the ship and the pikeman keeps a watchful eye on the back of the ship. It is sail powered and it features a crows nest on the top of the mast. This would allow the crew to lookout for land on the horizon.

Various goods are stored on deck undeneath some sheets of canvas. Both sides of the ship appear to be carrying the same - and these goods could potentially include Wine, Ale or even pitch.The white crates could contain substances such as Stone Iron or Candles, and additionally the ship contains some wooden crates which could contain anything. Compared to the Trade Ship, the Viking Ship is tiny. It has 8 Vikings and hardly any mast. One leader steering the boat and no room for storage. However - this is a good boat for other scenarios. You can use this for raiding parties, invasions, and even lifeboats or smuggling.

Another trick you can use is to have a third type of boat. By combining both types of boats at the same time, you get a unique effect. The boats combined show a trade ship with oars rowing it. Should the wind drop, the ship would keep on moving with oars! The boats move at exactly the same speed and look very well blended together. This is a very good example and looks suprisingly similar to a Roman Warship. Missing a few minor details such as shields and markings, but with a new skin for the original trade boat this is easily achieveable. You might even attempt these ships to ram each other! Moreover - the vikings are still visible rowing away under the canvas. If you look closely enough, they can be seen still: 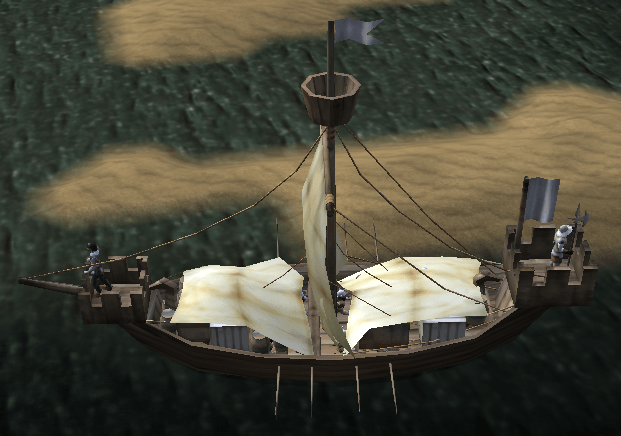 This is very simple to create - simply script exactly the same events and markers for both ships, so that they move at exactly the same time. There are many other reasons how you could use this ship design - you could tell the player that the ships have been attacked by vikings, or that they have been hiding on trade ships to attack your castle. There are endless possibilities!

Because of the fact that the viking boats are covered completely by the Trade Ship, we can use them as a lifeboat. Another example you could use is to make the Trade ship turn to a wreck and then use the viking ship as a lifeboat, making it turn a different way:

If you script a few Viking boats coming from the wreck, then you can give the impression of several lifeboats leaving the wreck. Moreover, you could expand on this and create something even better - instead of making the ship turn to a wreck, you could put it on a delay, and send out some Viking boats from the Trade ship using them as Landing Craft for a waterborne invasion! You could enhance this by using mnore than one Viking boat and more than one Trade ship - and each Trade ship has at two Viking boats. However - if this is indeed the case - you should send each Landing Craft to a different location on the beach. If they are all sent to one location, then it will only look as if oine ship is present.

This is a brilliant way of shocking the player, making them think that a rear defensive position is safe - until Vikings suddenly spawn on the horizon!

Ships will go anywhere on the map just by placing the appropriate marker flags. Up or down rivers, up mountains, even down waterfalls (This would be a good scenario for a shipwreck!). Ships can even move through walls like Ghost Ships can.

Ships can be synchronised with other events, such as Invasions. Unfortunately, the only know way to do this is to set the boat to move to the shore, then play the game and count the number of months for it to get to the shore. The ships always move at the same speed so it's not as hard as it seems, but it does need to be done through trial and error. We have a great advanced article on scripting invasions here that might help you to get started with that.

Additionally, invasions must begin on the start of a new month, and cannot begin in the middle of one. This means that if the boat does not arrive exactly on the start of a new month, you will need to delay the ship by one month to ensure that the boat is still at the shore when the invasion is triggered. If you are not happy with this method, the only other way you can accomplish this task is to alter the path of the ship.