The Stronghold 3 editor contains many new features and functionality that was not available in the previous games of the series, and this editor is re-used in Stronghold Crusader 2. The main good point to this fact is that once you understand the editor, the main concepts can be used again in Crusader 2 when creating maps. However the bad side, is that it is an entirely new style of editing compared with the previous games of the series. This article will briefly introduce you to the new concepts in the Stronghold 3 editor and how to use these to your advantage.

First off, the editor is a separate application from the game itself and must be used separately. This slightly complicates things as if you attempt to launch both the editor and the game at the same time (to check your map while you're editing) you are told via a message that the game is "already running". Unfortunately, you must edit your map and then completely exit the editor to test what you created in the game. To use the Stronghold 3 editor however, it depends on where Steam is installed on your PC. The default directory is in Program Files on a 32-bit machine, or Program Files(x86) on a 64-bit machine.

You can find out which type of system you have by going to start -> Right Click on "This PC" or "Computer" -> Properties. However, I will show you an easier way. Go to the start menu, type 'Steam' in the search box, right click on it then select 'Open File Location'. From there go to:

Note: In both games the map editor must be downloaded separately from the game itself. If you haven't already, open Steam, and go to Library -> Tools and double click on Stronghold Crusader 2 Map Editor or Stronghold 3 Map Editor to start the download. You must first have the game installed to begin downloading the editor.

I strongly recommend creating desktop shortcuts to these files if you intend to commonly use them, to do this, right click on the editor file, go to "send to" and then "Desktop (create shortcut)". I would also like to advise that you regularly save your work. Particularly in the Stronghold 3 editor, crashing is quite frequent. Firefly have done a fairly good job in rectifying the problem in Crusader 2 but it can still occur.

During the installation, the .NET 3.5 framework will also be installed if you haven't already got installed on your PC. Once you open the editor, you will be left for a few minutes while it loads up the necessary resources, until you reach this screen: 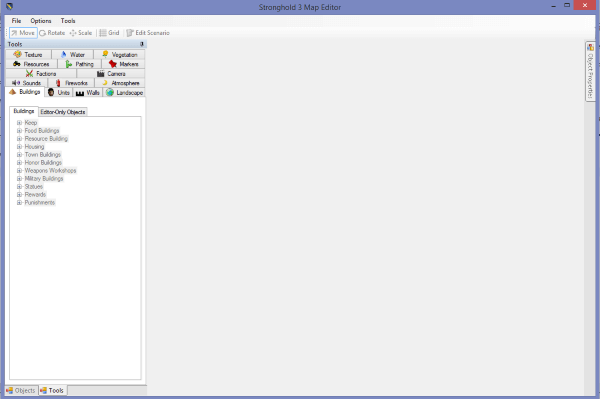 This is the main interface of the map editor itself, and where you control everything. Starting from the left, I will explain the menu items. File allows you to create a new map, open, save and close existing maps. There is an additional option for importing and exporting scenarios. Scenarios are the scripted events that are used in your map, the map itself is what you see but the scripting tells the map how to behave. Every condition you setup is an event, i.e. telling the game to lose when the lord dies is an example of a scripted event. For Stronghold Crusader 2, there is also one other option to publish to the steam workshop in one click. This feature is only available to accounts that have purchased the game directly through Steam, e.g. if you are like myself who have purchased the game from Amazon, you will be prohibited from using many of the features of Steam. Whether this is the case or not for your account however, users may always upload content to our download section. 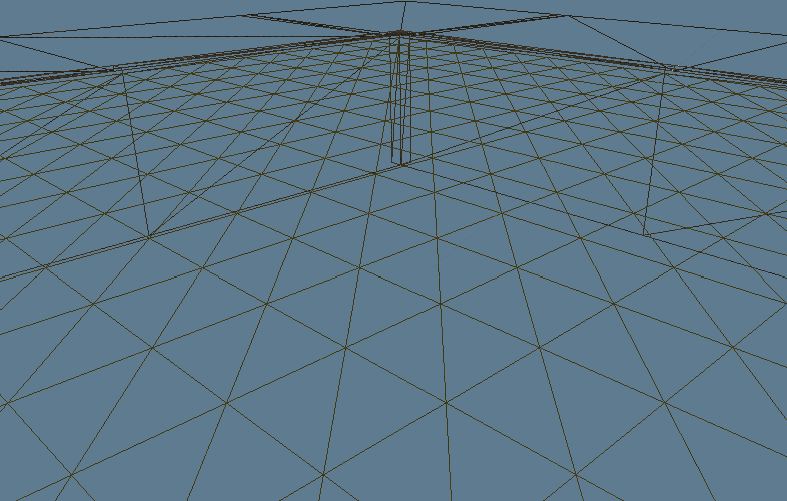 The LOD setting for terrain is for the level of detail the editor displays. For slower computers, set this to low. Now let's take a look at the bar underneath that:

This will appear grey until you start a new map, and then it gain some colour like the above image. The option Move, Rotate and Scale options are self-explanatory, and other options include "grid" which puts a frid on the map, and "edit scenario" which sends you to the scenario edit screen. In Stronghold Crusader 2, there are additional options such as highlighting objects, which will list all of the available objects on the map. This is useful if you would like to list all the objects on the map and select one rather than manually searching through them all. Free camera will allow you to move the camera to any angle or position on the map.

Note: Once a map itself is open in the editor, you will have to re-open the editor to load a new map.

To begin creating your map, go to File -> New and you will be prompted with a dropdown box similar to this:

The camera angle is changed by left clicking and dragging, right clicking and dragging, or scrolling your mousel wheel to zoom in and out. If you move over to right right of the screen and hover over the "object properties" a menu will pop out showing you all the objects on the map. By selecting the pin icon, it can be stuck in one place and does not move back. You can also pin/unpin the tools menu on the left hand side of the screen, which is the only other area which has not yet been covered.

This area consists of the following categories:

In order to add something to the map, whether it be a texture, building, unit or somthing else - you must hold the Control (Ctrl) key down while you left click where you wish it placed. To remove something that is already added (i.e. a building) select it using control & left click, then hit delete on your keyboard. This can be a pain to do but many players do not believe there is the functionality to delete things from the editor because there is no button to do so directly.

This guide provides a basic overview of the Stronghold 3 and Crusader 2 editors. For more information on actually making maps, please see our Stronghold 3 section. Using the new editor, you can create some amazing maps! Here you can see an incredible waterfall made by Lord Vetka. 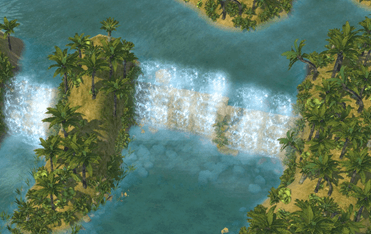