While the event in the map editor is called "Tree Fungus", the player actually experiences the effect as a drought. The event can be added as shown below: 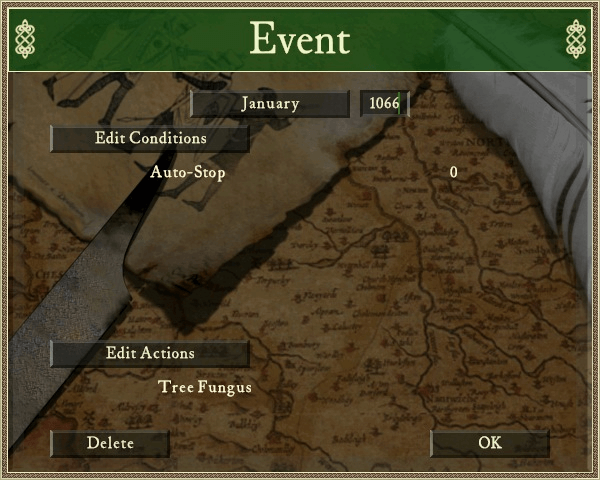 In the example above, the Auto-Stop condition has been used. This will cause the event to occur on the date shown, regardless of anything else that is happening on that time. When the event is triggered, the player is informed that a drought has caused most of the trees to die, and a colourful video clip is played:

Note that the event will not kill all trees, it will only kill the majority of them. If you have a particularly large number of trees on your map, then the chances are that a lot of them will still remain healthy after the event has triggered.

This means that in order for all your trees to die, the event must be repeated. Each time the event is repeated, a percentage of trees is killed until they all die. If you don't want the woodcutter report on each event, all you need to do is setup two events for the same month. It's also noticeable that only the older trees die. The younger trees always seem to survive, this is probably because they consume less water. The dead trees will remain on your map until a woodcutter removes them. They can still be chopped down like any previous tree. The following images show what the trees look like before and after:

If the event happens when playing, then there is no control over which trees die and which do not. However, you can take advantage of this by placing at least two forests and then play the game until there are lots of young trees. Then you can use the sav-to-map trick, which will put the map back into the editor. Now just delete areas of older trees from one forest, and newer from ther other. This will leave one forest with young trees, and the other with older ones. When the event occurs in-game, the young forest will survive and the older forest will die.

It's important to note though that Apple Trees always survive, regardless of this event. But you can also take this to the extreme. If you'd like dead trees to be on the map when the game starts, then all you need to do is use the sav-to-map trick. Simply place the trees on the map, play the game to kill them and then turn it back into a map! Now place any living trees you want - it's that simple. This can be useful for bogs or evil/ruined areas of your map. 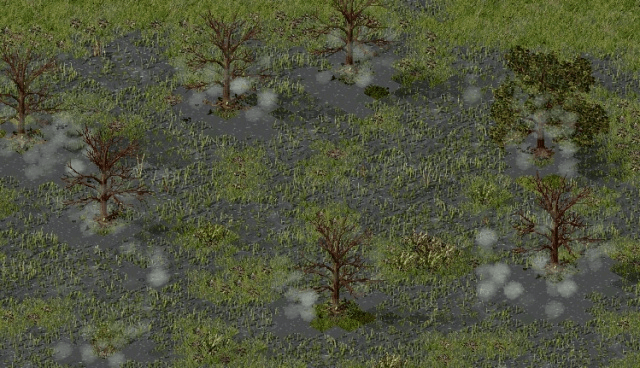 By having the trees dead, it's actually slightly better performance-wise too: there are no leaves blowing in the wind, and fewer new trees are spawned for a while. Because fewer new trees are spawned on your map, ther overall number of sprites will decrease - although dead trees will remain for a while, and then vanish. You could use this trick to reduce the load before an invasion happens.