In this mission, you are faced with two opponents exactly the same; Mordred. Luckily for you, you are Ice, so it isn't quite as difficult as it seems. First off, place your stockpile right of the trees with iron on the right, and stone on the left. This will provide 3 resources at an equal rate. Then place your granary to the east of it as far as possible, to give space for other buildings. First of all, get a production up very quickly, this is the most important factor to consider at the moment. Place three stone quarries, three iron mines then place your free wood camp. Now buy enough wood to place two hovels, and an apple farm.

Now turn your focus to defense until more resources come in. You will be fighting on two fronts this mission; one to the east of your keep, and one to the north. It is, however, very easy to spot the one to the east is closer to your keep - and could later serve as a weakness if not covered up properly. So start placing a wall there first. The height gives you a slight adavntage, so it's best to really take advantage of this, and place as many lookout towers as possible along the wall, while keeping the wall there itself. First though, ensure you have enough stone to place another wall to the north, with a gatehouse. Do not buy stone - it's simply not necessary at this stage. When you have enough wood, place some ox tether to transport stone to the stockpile - forget iron for the moment, or maybe place one if you have some spare. It's stone that you need at the moment. Place a barracks, armoury and ice tower, then another wood camp, apple farm, Dairy farm and as many additional stone quarries as you can for the time being. Then focus on hovels, placing three more.

If like myself, you're doing particularly badly on wood at first, send out the archers to the north, and capture the estate making it send you wood. This will help a bit to get you started. You will however, probably find that Mordred will attack your wood camps before they produce anything. Nevertheless, you'll soon need to defend against saxon attacks - just as well you built that wall! If you haven't already, place a stairwell, and send some archers atop. Then recruit more using your barracks, and send those in too - those pesky bats will soon be attacking you.

Now place an additional apple farm, two seal holes and another dairy farm, double your food production and start taxing your peasants. Place more stone quarries, and another two ox tether. The second you have enough stone, place an engine tower on the northern gate, and a dragon harpoon on it. This will partially help to defend against the bat attacks. And all the time you are doing this, recruit archers. Now place an additional three wood camps, as close to any trees inside your estate as you can find, and then double all your food production buildings. Finally put your ration level on double, and set your taxes higher. Now place two more iron mines, and more ox tether so resources can be transported quicker. By now, your estate should be somehting similar to this: 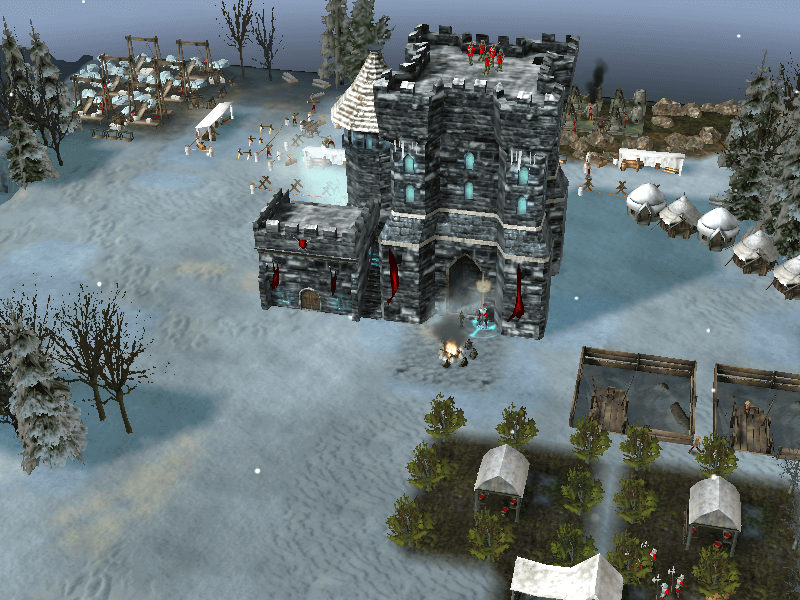 No need for weapon production buildings; they take too long to produce, and iron sells for a higher price so you will never be short of cash. Providing you have a good enough iron production, you will always do fine. Move more soldiers to your northern gate, not forgetting your eastern flank. Place more food production buildings, and some which will generate honour, these are depicted with a crown in the food production menu. And remember to place some wells! These put out fires caused by any potential dragon attacks.

Now make sure your eastern wall can first of all, defend against bat attacks. Place as many engine towers along there behind your wall as possible, with dragon harpoons on them. The same goes for your northern wall - when you have the gold, and stone available, strengthen them. The vital troops now are from the Ice Tower - buy several Ice Giants, and send them to protect your estate (or take it back, depending on the circumstance). By now, one Mordred should be attacking, and the army he attacks with roughly, is shown below. Destroy the siege camp as an added bonus, and to help water-down the attack. Shortly after, the next attack will come too. 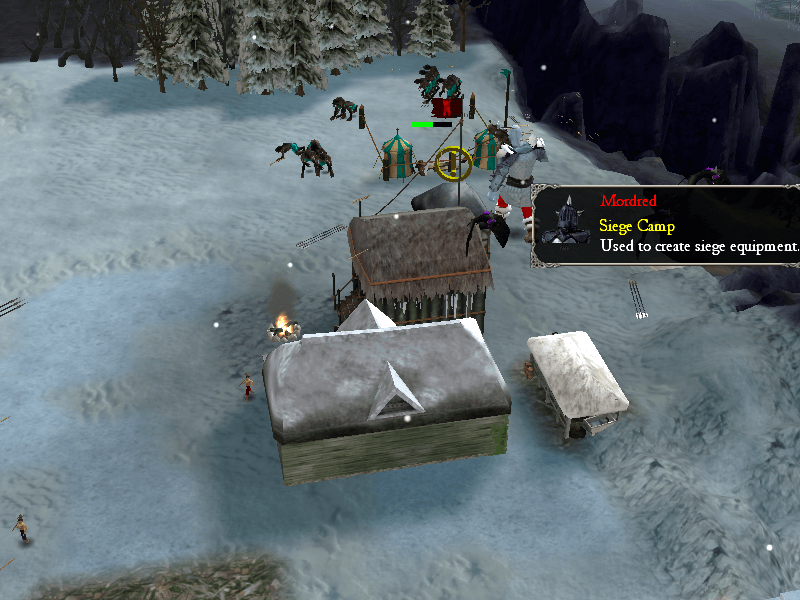 Not a brilliant force by any means, and the journey means his army is separated. Take advantage of this, and kill some of the weaker troops as they arrive in droves. If the siege equipment does in fact get through, then you're in for a rough time indeed. Trebuchets, Catapults, Cats and Werewolf Launchers are not very easy to destroy from a distance. You will almost certainly have to venture out to destroy them. Chances are anyway, your wall will be lost. In which case, as happened to me first time, recruit as many Frost Giants as you can afford, and send them to the northern wall to defend it. You will likely need a few waves, and recruit more archers. Send them to the gate when all the troops have been killed, and rebuild your wall. It will be very close indeed. The attacks keep coming at the same kind on intervals, so you really have no time to rest. You constantly need to keep your wall re-enforced, keep recruiting as any archers as you can, sending them to the wall and then return until your wall is fully defended. An Ice Queen may be very useful on a lookout tower.

You may well notice a large group of troops outside your gates after a few attacks, who appear to be stuck there. You don't need to come out of your castle to kill them; instead, simply send in some white witches who will kill them off for you which no loss themselves.

Now you can succesfully defend yourself, it's time to think of an attacking force. Place as many honour buildings as you possibly can, and set your Pantry to double, bringing in the maximum amount of honour possible. White Witches are very effective in large groups, especially at taking out the invasion force, which is where I started. They can only be taken out by Stake Hurlers, Crossbowmen and Archers - so keep an eye out.

Next, you want some Pikemen. Recruiting purely special troops takes far too long, so you need some standard troops too. By now, you should have enough gold to purchase at least fourty Pikemen, so start preparing an attacking force. You need as many pikemen as possible. In the attack I did, I had 77 Pikemen, and my maximum army size was reached, along with 103 white witches and the rest were all archers defending my wall. When you feel you have enough, send them round to the front of your northern wall - after an attack. This is where you will attack from, and you will attack the mordred to the north first as he is closest, and poses the most threat. I put my white witches next to the border of estates, and nothing could get past them. From there, I placed a siege camp, and purchased 7 catapults and 11 fire ballistas. Take out the engine tower first, and then attack the lookout tower and barracks. Once most of the towers have been destroyed, send in your white witches to kill everyone there, and then your pikement to penetrate the castle. One down, one to go! 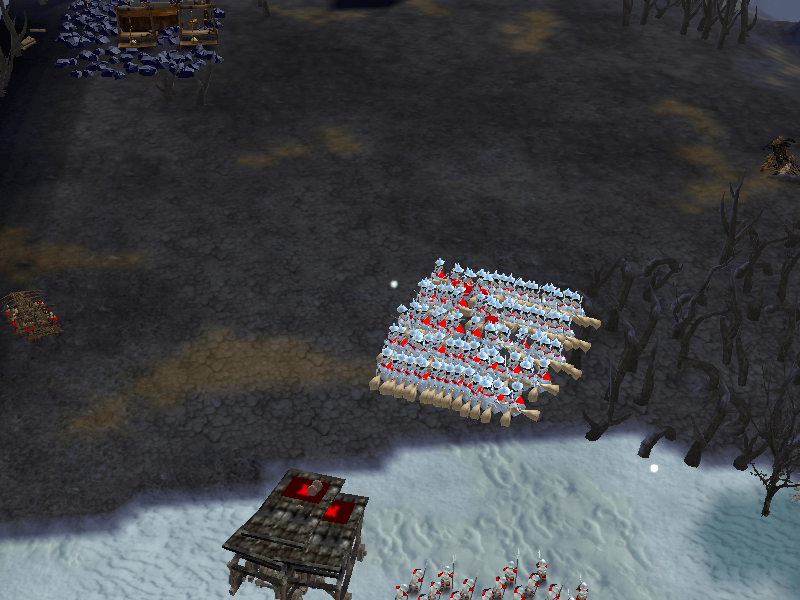 Send fire ballistas either side, then catapults in the middle. The Fire ballistas can take out the crossbowmen, and while the crossbowmen are distracted by them, the catapults will get close enough to properly aim at the gatehouse or walls. This will probably almost certainly take more than one invasion, so ensure that your castle is properly defended against the other Mordred. During this attack, I sent my witches in, then my pikemen, they managed to destroy some buildings, and then I sent more witches and a dragon in, who finally finished him off.

To kill the other Mordred, you need a bigger army - however, you can send everything in this time because there are no additional fronts to right off. First, you need to make sure that you can restore your army. Create roughly the same amount of pikemen, and White Witches, and send them to outside your gate, where the usual invasion will stay. These will kill off any troops moving towards you, and you can focus on building a bigger army while they do so. Buy a dragon, and then slowly push up the middle towards his estate - stopping when you near the first dragon before the Stone Circle. To prevent your troops getting killed, place a siege camp, and send forward fire ballistas. Tell them to target the dragon, and eventually, it will die, saving your troops from dying. Once that has been destroyed, then send a small number of troops to the stone circle, and the bats will kill them. Now you can move in with the rest of your troops and take it. Your next task is to get past the second dragon. You can try the same tactic, but I just purchased several Frost Giants and destroyed it. Keep them pushed into the hill-side, otherwise when the invasion comes, Morded's troops may well sneak past without you realising. His poor excuse of a castle (if you can even call it that!) means that your troops can just rush up the hill ... at first glance. There is pitch next to the barracks and lookout tower, as well as further on - so send a dragon in first to freeze the archers in the tower while your troops move past. Another tactic is to buy Frost Giants, send them up and the pitch will be activated - but they move so fast it doesn't affect them. Now, you can just rush in and kill Mordred. 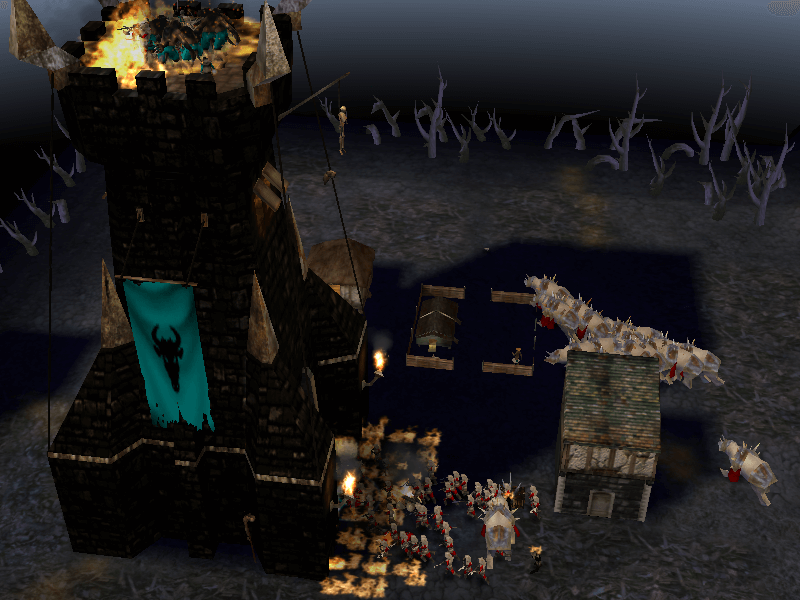 If you really are struggling with this mission, you can download a saved game from our download section.

Congratulations, you've just completed the Long March trail! What?! That's not it yet - we still have The Road to Hell to do!