Using a small wooden gate may not be the best idea for defence, but it's certainly the best idea for stunning scenery on a map. However, in order to do these things, you must remove the original gatehouse defenses.

First, place a two 3x2 stone wall. Make sure they are parallel and have a distance of 3 tiles in between them. Use stone, as it will contrast better with the wooden gate. This will help when you are placing the gate later.

To make placement of the gate easier, press the spacebar and line up the front of the small wooden gate with the footprint of the stone walls. 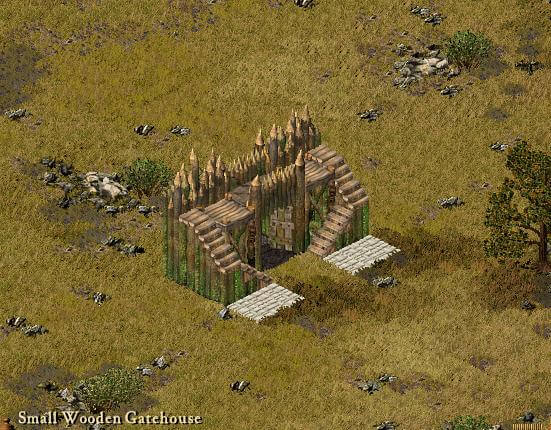 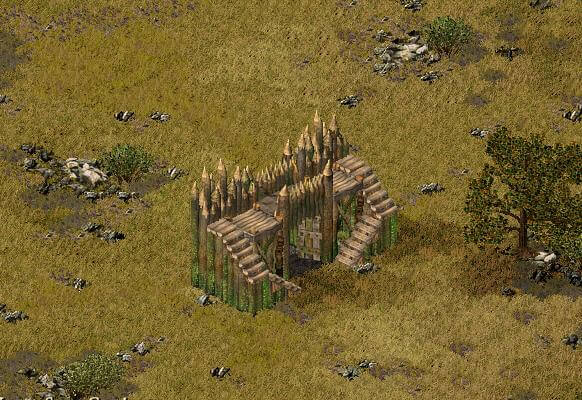 Now, place the gate. The picture below will be what immediately appears if the instructions have been followed completely correctly. 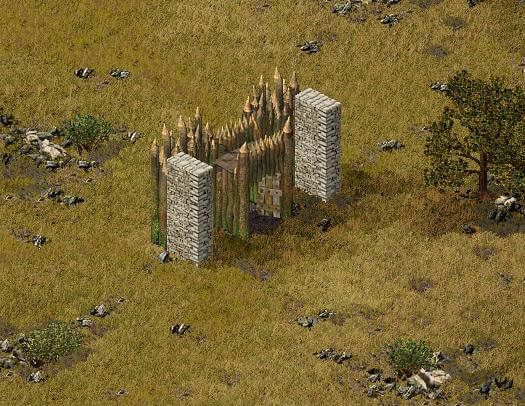 You may just wish to delete the stone walls now. This will end up with something similar to this screenshot below. 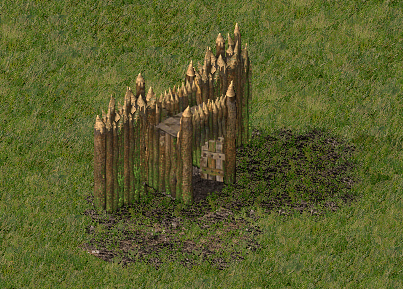 However, if you require a proper gatehouse, then place two small defense turrets over the wall spurs that are connected to either side of the gate. You can cover one spur completely with each tower. The picture below shows the first of the two towers being applied - do the same on the second tower and then continue. 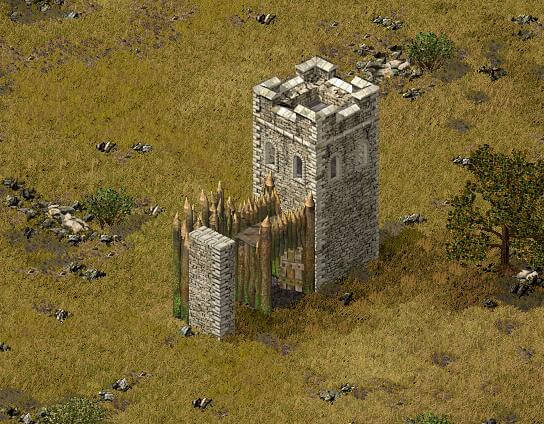 Now delete the two defense towers you placed. All that remains is your newly created wooden gate. 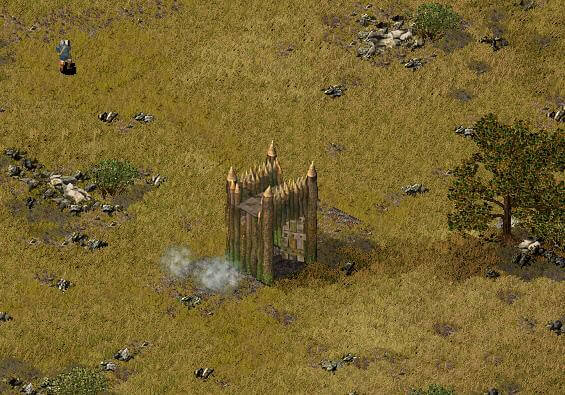 Note: In some versions of the game, and always in an unpatched version 1.0, the gatehouse can get confused as to whether it is open or closed when first created. 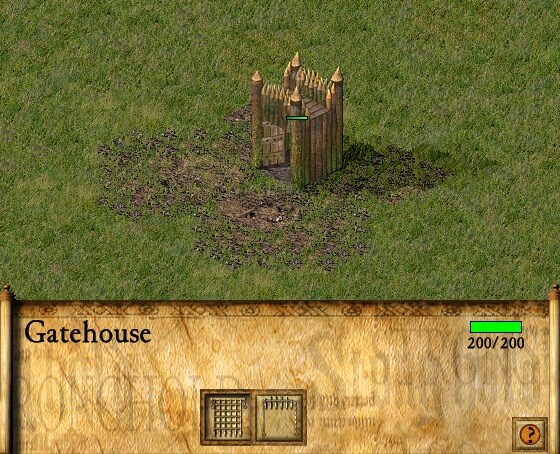 To circumvent this problem, open and close (or close and open) the gate. No further action should be necessary.

Other important information While no trace of the gate will remain once deleted, the game will consider anything placed on the destroyed area where the wall once stood as part of the gate. That means that if the gate is destroyed, a 1x3 tile hole will be ripped into the surrounding fortifications on either side of the gatehouse.

Also keep in mind that while working in the editor, if something is changed or deleted that you placed on a tile that was once occupied by part of the gatehouse wall, the gatehouse will also be deleted. This means you must return to the inital part of this tutorial. However, as pointed out on the old Stronghold Knights website, there is a way to not only eliminate the problem but to turn it into a minor advantage. 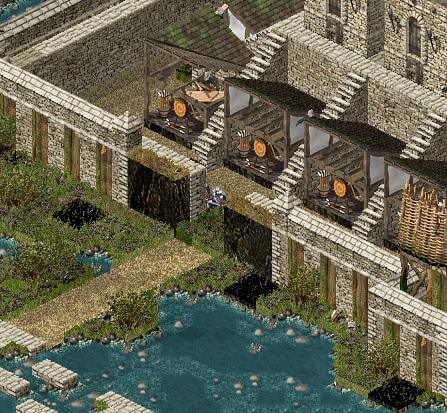 This is an advantage due to the fact the gates disappear completely if destroyed. And when a large stone gate is destroyed, a 7 tile wide hole suddenly appears out of the dust cloud of the gate's collapse. When a Small Stone Inner Gate falls, a 5 tile wide hole is rent into your fortifications - a medium sized hole. With the small wooden gate, the hole is only 3 tiles wide, which is a much smaller breach, easier to defend. This image is taken from the map Henn Dommen.

With some attention to detail, you can create some stunning maps. Below are some excellent examples. Note: In some versions of the game, and always in an unpatched version 1.0, the gatehouse can get confused as to whether it is open or closed when first created. 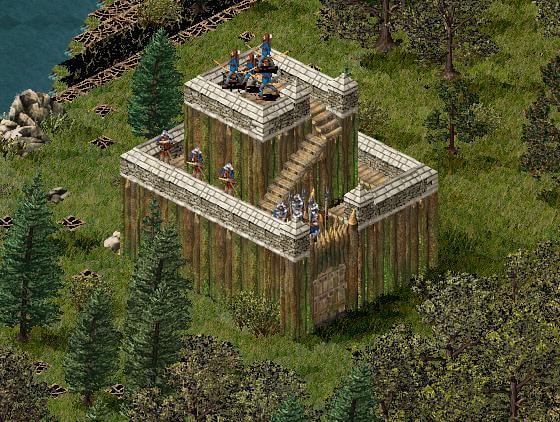 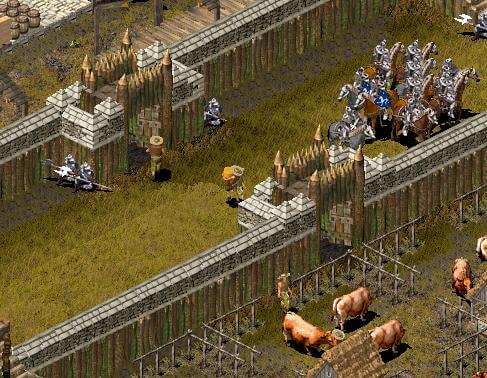 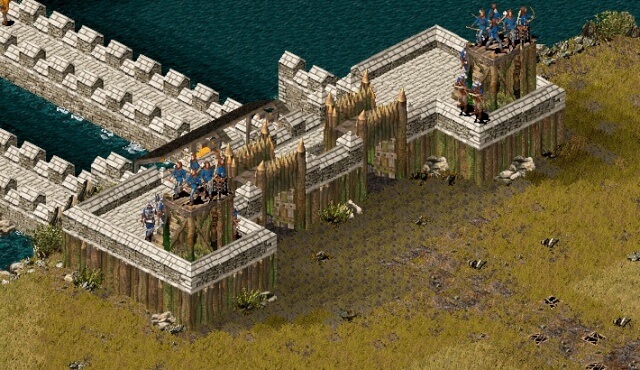 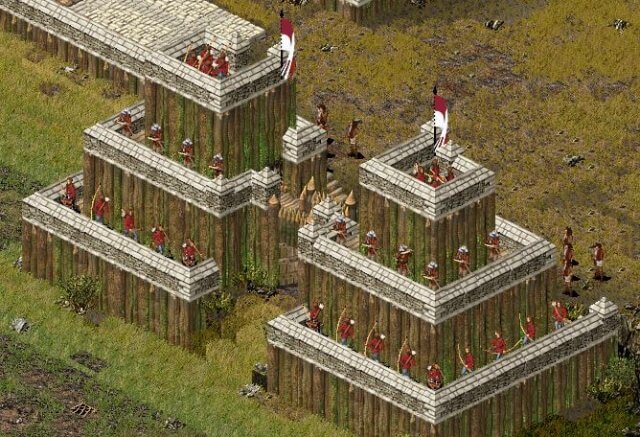 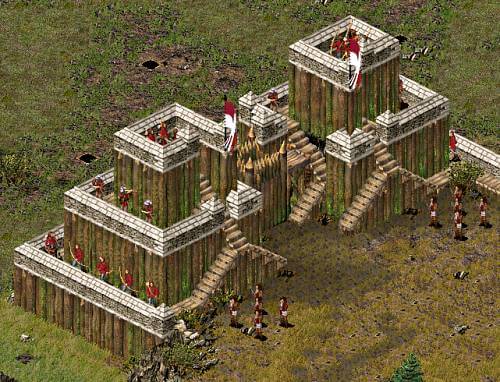