While this mission seems difficult, it's actually easier than the previous. This is partly due to the use of no "special" troops, but also because the invasions are not as heavy. However, you are in a bad place on the map; in the middle of two AI opponents and one clearing where invasions are triggered from. The trick to this mission is not to focus too heavily on defense; just enough so that you can hold against the repeating invasions. An you can steal troops from the AI too - by using Vampiric Creepers, you can steal men-at-arms and archers which are not protected by swordsmen.

You'll also notice three dragon nests around your estate. Leave them, they don't intefere with your buildings and will just divert useful manpower from your lines. And, as an added bonus, they will attack any nearby enemy troops. First of all though, you should place your stockpile by the stone, which is at the furthest point away from the AI castles. This also has two sets of stone next to each other, which is ideal for getting a defense up quickly. Next, place your granary to the left of this, next to the un-taken estate. At this side of the estate, there are no attacks. When you have enough wood, make sure to place several iron mines, these will be your main source of gold as you will be able to sell all the iron you make.

Now you're going to want to place three stone quarries, three ox tether, three chicken farms, three hovels and two dairy farms as well as two apple farms. Now claim your free wood camp. While you wait for your resources to come in, start to place your castle. It doesn't need to be anything fancy, just a very small castle with a few towers. My completed castle is shown below. 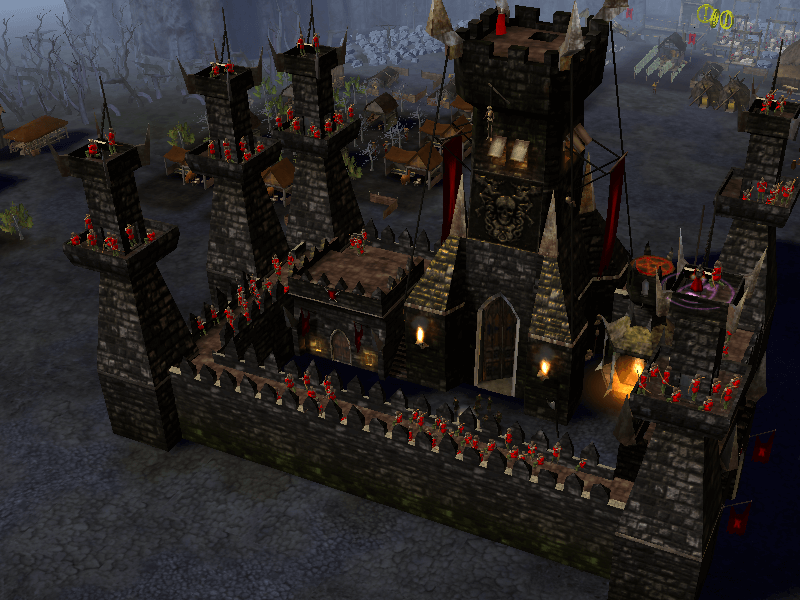 Also remember to place your barracks, and sorceror's tower inside the defense. You may also want to place your armoury in there, but I placed it nearer the stockpile for more producibility. You should then focus on recruting more troops, as before you do anything you need to ensure that you can successfully defend your castle from invasions. Recruit all the archers available and then sell some of the pitch in your stockpile. This will allow you to purchase all five knights available. Now send them to the neutral estate to the west of your keep, and kill the patrolling men-at-arms.

This will allow you to take over the estate, and make is useful for your production industry. Make it produce 'wood' for you as a temporary measure, this will give you enough wood to build more wood camps, become independant from relying on the estate and get up a weapon industry. Once you have enough wood, make it produce food instead. Actually, while you are capturing one estate, you may wish to capture another few estates which aren't guarded. Meanwhile, focus on weapon production. You need to build up a considerable amount of weapons in your stockpile, so start using some of the wood you received from the estate to build another wood camp, and some fletcher's workshops.

If you're short for gold when building them, raise your ration level, and then start taxing your peasants. By now, you should be doing fairly decently. But lets change this to very well. Place one more apple farm, another chicken farm and another dairy farm. Do not forget to place more hovels as you place more buildings. Very soon, troops from the castle to the north east will attempt to attack you. The good news though, is that the vast majority of them are not guarded by swordsmen, or other strong troops. So exploit this flaw, and send in some of your vampiric creepers to convert their troops. 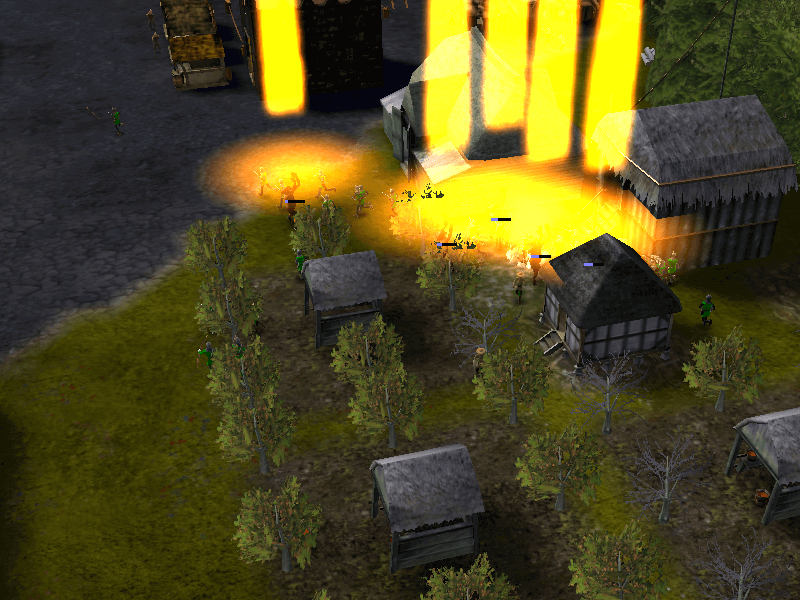 When you have a big enough army, you might want to consider building a siege camp and starting to siege the castle to the north east of you. In that attack, I sent in all the captured men-at-arms (which totalled about 40-50) about twenty archers, and slightly more werewolves. I also had three vampiric creepers (to capture more soldiers). The problem with attacking this castle is that it has moat all around it, apart from the gatehouse.In order to solve this issue, we need to use a few things to get over the walls. For one, two werewolf launchers. These will allow you to launch werewolves over the wall. These can then capture the gatehouse and your troops can pass through.

Next, you need to purchase several catapults because they can help to destroy the towers. And after you've destroyed the towers, they can then focus on parts of the wall (or even better, barracks as this will stop them from recruiting troops). While all this is ongoing, you need to make sure that your werewolves get launched into the ccastle to cause more damage. Unlike vampiric creepers, werewolves are pretty strong and can very easily destroy some of the wooden buildings, such as wood camps, stone quarries, the granary .etc. This can hinder the production even further - and if you have already managed to capture the gatehouse, then send all your troops through, don't even bother sending them onto the walls or to attack other troops, send them straight to the lord.

For one point, your creepers may be converting them, and it will kill the troops you may receive, and two, it wastes the available troops you have - this is only the first castle of two. If you wish to speed this process up, you may send your men to dig the moat as well, and then destroy it with some of your catapults. 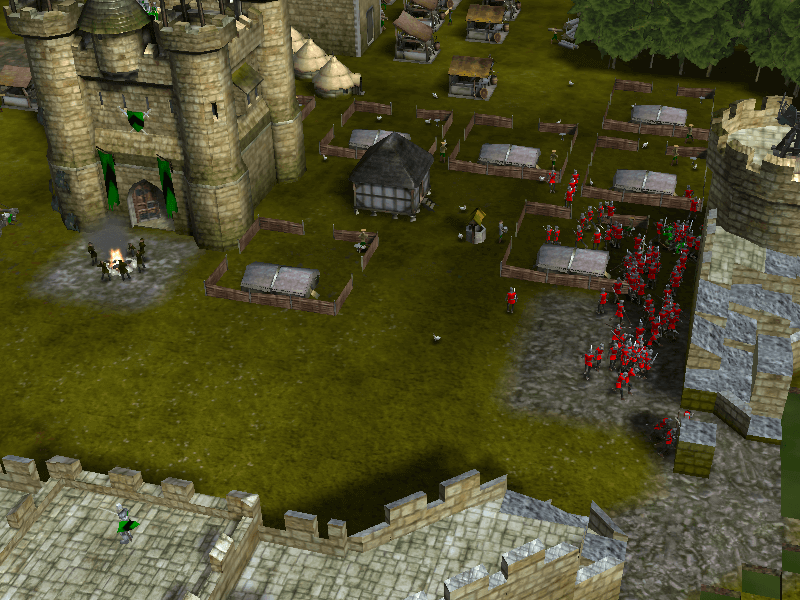 After a struggle on the keep, you will win. If not, keep your catapults where they are, and make sure that the AI does not manage to replace more troops or towers until you can send more troops to the battle.

Now turn your attention to the estate on the map, that does not belong to a lord. Send in some archers and men-at-arms there and they will easilt take the estate. Now all that's left is the other castle. This is the most heavily defended, especially around the gatehouse, but you can either go around this, or using the correct siege equipment, take it fairly easily. First though, make sure to spend some of your available gold purchasing additional werewolves and Vampiric Creepers. These will help you to take the castle defenses easier. Then buy three battering rams, and move everything over to the front of the castle. 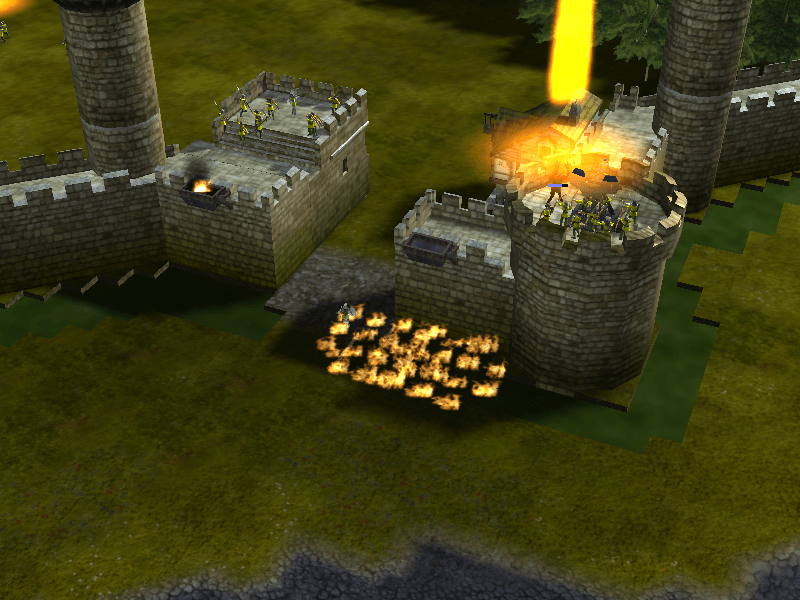 Send in your wereweolves first, and make sure they take out the swordsmen. Then send in your vampiric creepers and start converting some of the archers on the wall. While they can no longer fire at you, send in your battering rams, and destroy the gatehouse. The thing which you may have noticed is that there are now no more soldiers between the gate and the keep. Just charge the keep and the mission is complete!

You can download a saved game for this mission here.