This is a mission which can take several attempts to beat, and it can take a while to get a "proper" invasion force ready, making it even worse. Progress is slow, and the enemy is at first, very strong compred to you.

First off, place your Stockpile south of your keep, and your granary to the North. Keep them both as close to the edge of the map as possible. Then, place three wood camps and an apple farm. Using some of the avilable stone in your stockpile, now build a wall blocking off the bridge. Be sure to add a stairwell to it to allow archers to go up on it. And that's your next job - place a barracks, armoury and if you still have enough stone, the sorceror's tower. By about now, your first shipment of wood should be coming in, so make good use of it. Place a hovel, another wood camp and more food buildings. It doesn't really matter which, just make them varied.

Now, use all your gold to buy archers and station them on your wall. The attacks will come, sooner than you think. Now concentrate on stone, and iron. Use all your available wood on placing stone quarries, iron mines and ox tether to transport them both to the stockpile. You need reources to get gold for troops as it's in such short supply. You'll need a lot of stone in order to build towers which kill off the demonic bats which come to attack you. Place more food buildings, and then a Pantry along with some buildings for that. You'll also need a lot of honour (primarily for dragons) but also for other special units.

Next place another wood camp to speed up your wood production, along with two or three hovels and more iron mines. Then more food buildings, honour buildings .etc until you get your first shipment or iron. Sell everything. Then buy bows, and train as many archers as possible, putting them on the front wall. The attack will otherwise break through.

When you have enough stone, start to build lookout towers along the border with the estate, with engine towers in front of them. This serves two purposes, firstly, it will allow you to shoot attacking troops easier, and secondly, it will allow you to kill those pesky bats. Now you can start to make weapons, place as many fletchers workshops as you can, until the first invasion, which should be shortly. You'll see when Mordred is about to attack, because he will recruit a lot of werewolves from his sorceror's tower beforehand. His army will consist of roughly 15-20 werewolves, 5 men-at-arms and several crossbowmen. This doesn't sound like much, but he makes a siege camp which which contains a wereeolf launcher, as well as some other irritating pieces of siege equipment - such as a trebuchet. This will target your buildings, so make sure you replace any it destroys. The key to winning is taking out the siege equipment (particularly the trebuchet and catapults), then any ranged units, then the other units. 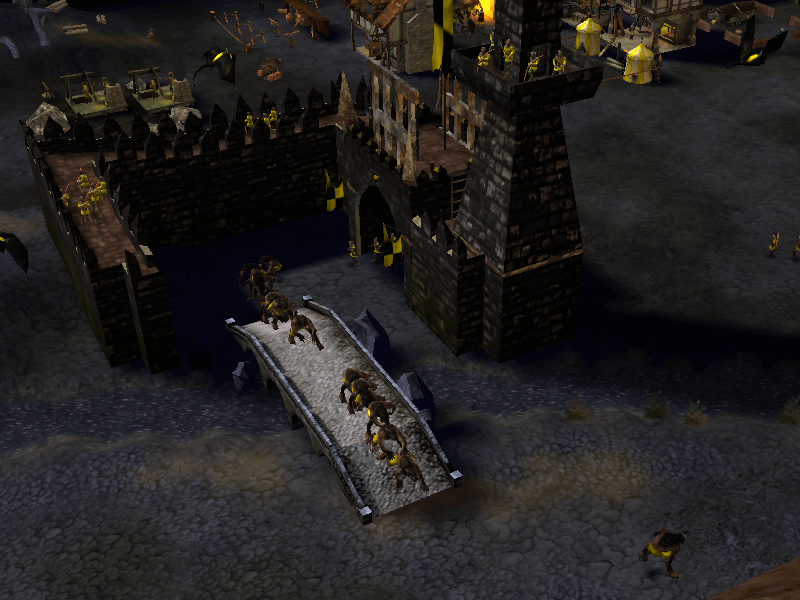 Note: In order for a siege to end, all units from that attack must die, and then the siege camp will automatically be removed. You do not need to manually destroy the siege camp.

You may wish to purchase a sorceror to help defend your walls from the sieges, and if you followed the previous advice of placing towers along the border of your estate, you should place dragon harpoons on them - these target the bats which will be sent to attack you. If you keep replacing the troops you lose by more troops (through selling iron) then you'll be able to keep up a decent defense. Make sure you place more towers, and station archers upon them. Re-build any destroyed buildings, and make sure that you have a more successful weapon industry going. The enemy will keep attacking, but the gap between attacks is always the same - so you know you can always recruit more troops to replace those lost. When you have all your walls and towers full of archers, you should start thinkning about an attacking force. I use saxon warriors to attack becasue they are very good in offensive combat. The same goes for werewolves, they are also very useful in aggressive, violent combat.

The first problem you face is removing those bats from the towers - some may have been killed by your archers in the towers (if you placed them close enough) so if that is the case, that's less to worry about. Otherwise, send some troops in to be killed by the bats, once they are gone they will not be replaced. The next challenge you face is the sorceror on the tower. Again, this is good news, he will not be replaced. You can go for an easy tactic, like trying to use the bats, or you can use a tactic which is re-usable; a dragon. I used a dragon to kill the sorceror, which then killed the other archers on the tower. You may need to use two dragons, and you may have to fight off two or three invasions while doing this. If so, be patient, and try to kill the troops off as quickly as possible. 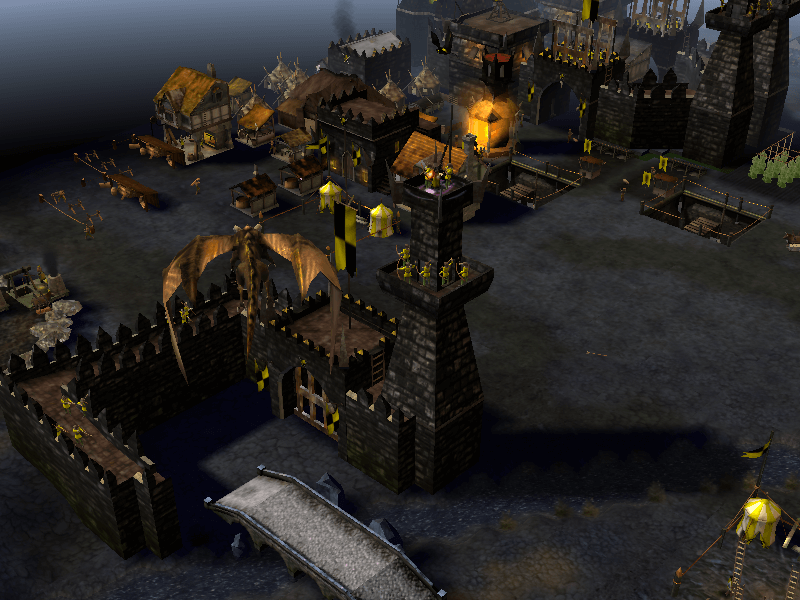 Now, you should place a siege camp in your estate and purchase some catapults, make sure that you have six or seven - and some melee troops with them. I purchased 70-80 saxon warriors and sent all my archers as my ranged defense. Simply send the catapults in, and destroy the gatehouse - it's also a good idea to send one ladderman in, this way, you can station your archers on the walls for more protection and extra range. The first building you need to destroy is the Sorceror's Tower. This is the only building Mordred recruits from apart from the barracks (which produces weak troops). Send your saxon warriors in to kill any patrolling werewolves - but be careful to not venture too near the walls. Then send in your catapults and destroy the sorceror's tower. You may wish to purchase more troops (and catapults) before continuing, I recommend this as a precautionary measure.

Next on the list is the barracks, and then the armoury. Once you've destroyed those buildings, you can pat yourself on the back. If you're feeling particularly cruel, or just want more honour, you can destroy more of the AI's buildings - but be careful, the AI always tried to place those two buildings, and in the same area. So you will have to keep checking for them coming back. Now, you need to make a breach, and the weak spot is not very hard to spot at all. Destroy all the buildings to the left of you, and move in towards the engine tower. It's unguarded, and only men-at-arms are on the gathouse to the right. Set all your catapults to fire at it at once. You've probably also noticed that you're hardly under attack. This really is a bad castle design. The AI will always try to place more buildings near you, ignore them unless they are military based. 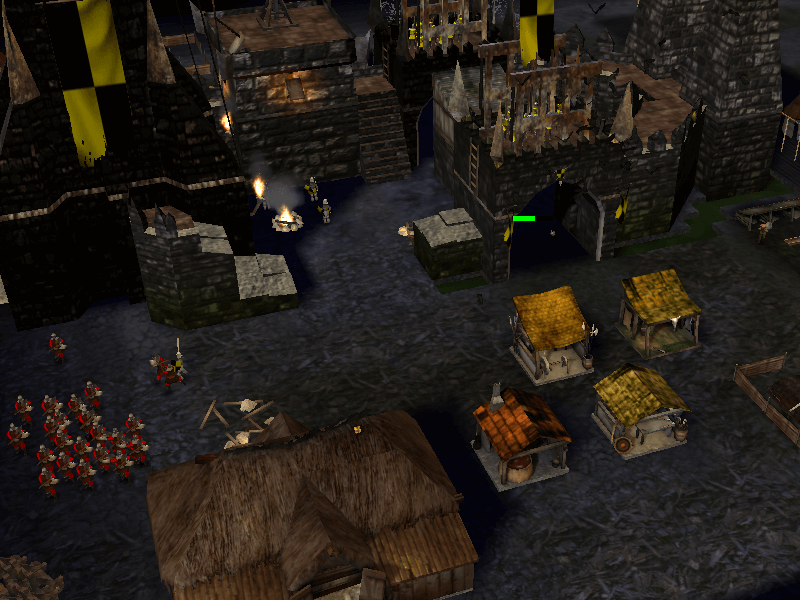 You might want to charge into the breach you've created, but there are still archers and crossbowmen in the towers, which would have a dramatic impact on your troops, depending on how many you actually have. So send your catapults to the right, slowly destroying as you go. When you destroy the central towers, you can then send troops around the back to destroy the granary as well, completing your encirclement. 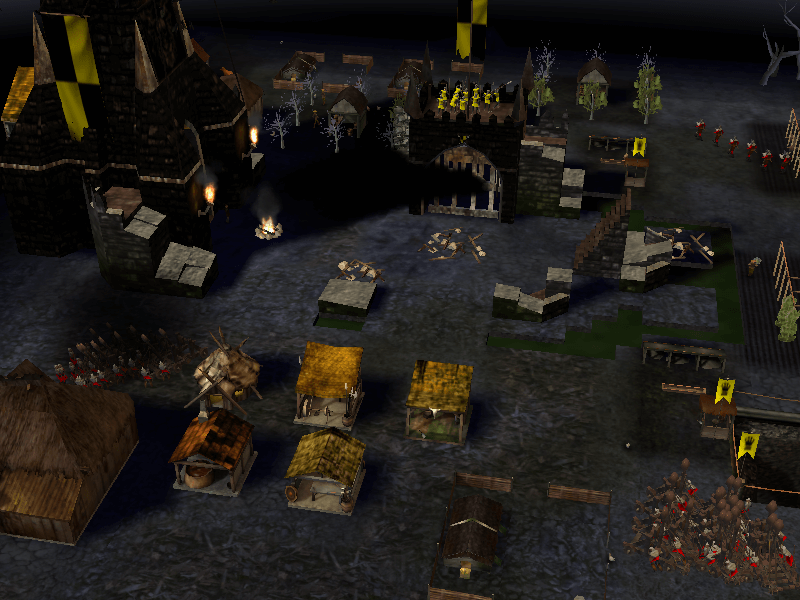 Simply charge the keep, and you should easily kill Mordred. He will use his special power, but you should greatly out number him. And even if you fail, it will take an awful long time for his economy and military to get into a stable condition once more. Done!