This mission is definitely harder than the previous, and unlike the previous, you cannot do it fairly fast; the AI are stronger now and get things built up much quicker. So You will need a defense. And unfortunately for you, they are on both sides of you again. Since Lancelot is on the left, we'll tackle Alfred the Great on the right first, he is Arthur's replacement.

You don't have an awful lot of gold, and no weapons. So You'll have to slowly build it up. To start with, place your stockpile next to the trees, and your granary nearer Lancelot, on the same side of the river as your Keep. Then place a wood camp, one apple farm and your Barracks. Then when you can, build more food buildings, you should just be able to before you run out of food. Note that you should vary your food buildings, as this generates more honour.

Then, focus on generating more wood. Place three additional wood camps and when you can place a stone quarry, do so. Stone production should be your #1 focus at the moment. For the first time, you're actually going to be fighting on two fronts at once, so the quicker you get stone, the better you will do. When you can no longer place stone quarries, place several iron mines and ox tether. Do not forget to keep placing a food building in between these as a raised population will require more food.

Now you should be in a position to generate some honour. Place a Castle Kitchen and several means if generating honour through it. (These buildings are depicted by a crown). By now, the amount of ston eyou have should be enough to construct a wall to block out Alfred the Great, you should create this and build a stairwell for troops to access it. When you have enough stone, do the same to Lancelot.

If you followed all the advice earlier, you should now be in a position to start taxing. Place a fletcher's workshop, set your tax level to Normal and your Granary ration level to extra. This should give your population nothing to complain abaout. But just to be sure, place another three food buildings of some kind (I'd say one of each type for more variety). Keep building more wood camps until you're never short of wood for whatever you need.

By now, your settlement should look similar to this: 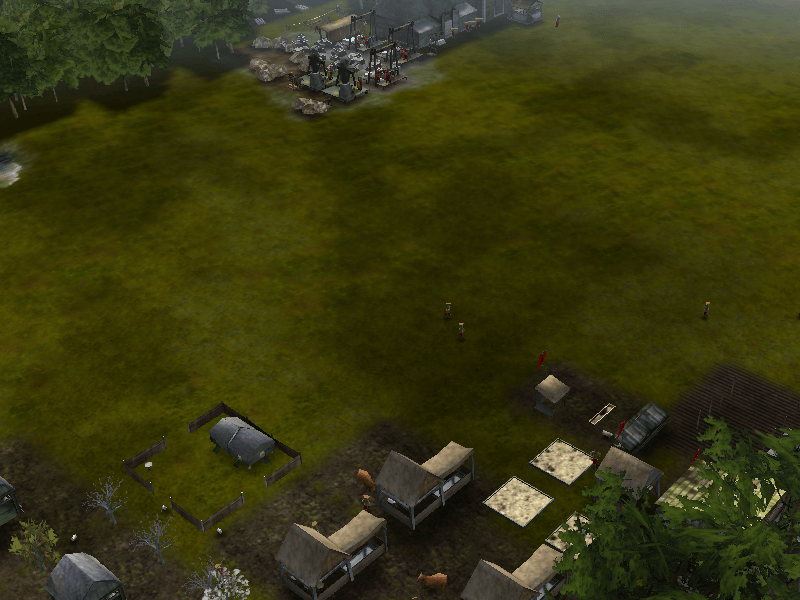 Set your pantry rations to double, place another vegetable garden, vineyard and Eel pond then turn to troops. You need an armoury and then place more fletcher's workshops and a round table. Since these are the only special units you'll be able to recruit, they are quite important in this mission.

You may now consider placing some towers upon your walls, these will allow your troops to fire further and take more hits. Now you should be just about level again with the AI (or hopefully slightly further ahead). Place more fletcher's workshops to ensure that you can recruit more troops, your tax should help you greatly with this. Now place three hops farms, two breweries and an inn, just next to your stockpile. These should help to increase popularity, meaning you can tax even more. If you're still low on gold now, try selling some of your iron.

Now, place two or three armourer's workshops, a poleturner's workshop (which is producing pikes) and a blacksmith's workshop. You should have at least 16 bows in the armoury by now, so recruit all the troops you can and half them between the two walls, placed in the lookout towers you placed earlier. This should be more than enough for the moment to keep the attacks away. All you need to do is improve your military strength now. Quickly sell some iron, stone and wood buying bows instead, they'll be needed as your first attack probably comes from Sir Lancelot any time now.

There is nothing to worry about, Lancelot is a weak lord. But you will need those extra archers you just recruited - most crucially of all, do not move (all) the troops from your other wall! By now you should also have enough gold to buy a few special troops, Merlin could come in handy, and either Percival or Bedivere as they are both strong.

There is no huge force, most of it had been destroyed by the time this screenshot was taken. But a similar amount of archers to below should easily be able to take care of it. 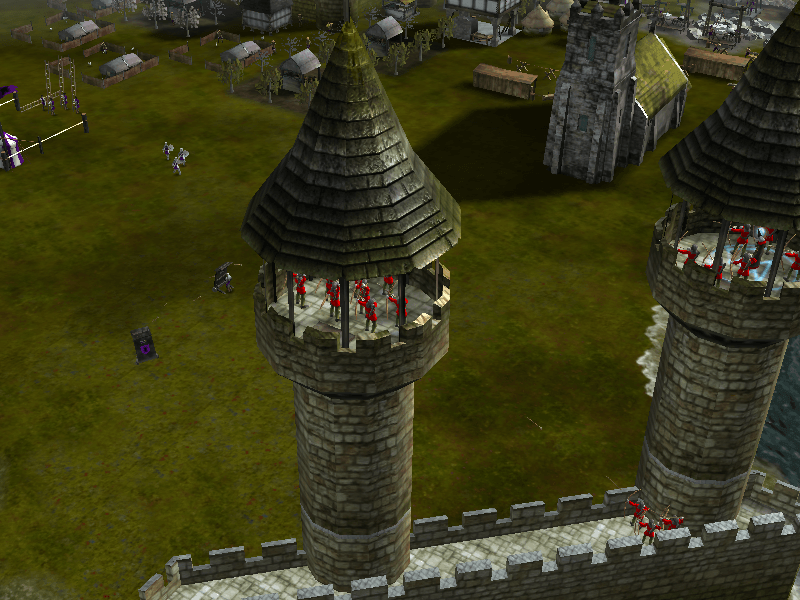 By the time the attack finishes, you should have enough honour and gold to recruit some knights. This can help you to raise an army for attacking, it will take a little while but there isn't too much to worry about. Lancelot will be the lord you should take out firs, as he is the most annoying out of the two; forcing troops to be stationed on the wall you built there while he constantly attacks it. Go back to your stockpile and sell all your wood, the majority of your stone and the same amount of your iron. Then buy fifteen armour and fifteen swords and recruit the same amount of knights from the barracks. If you can't afford to due to honour, just place more Pantry buildings and wait for the second attack by Lancelot to subside.

If somehow his attack does catch you by suprise and you do end up with ladders on your walls, use them to get down the other side into his castle with your knights and you can sabotage some of his production buildings. Otherwise, create a hold in your wall and do the same thing.

It's also a good idea to create some siege equipment and send that in as well as your knights, they can do more damage from a distance which takes no damage to your own troops. Providing you don't actually remove the wall on the other side, Alfred the Great will not attack you, so use this to your advantage and concentrate solely on Lancelot. Now purchase some Trebuchets, destroy his castle wall, rush in and kill him, turning your attention to the only remaining threat - Alfred.

Send your troops over to the other wall, then delete a section of the wall (ensuring there is a gap through to the other side) and replace it. Alfred's troops will attempt to attack, and the archers in your tower will kill them all. Now, create the hole again, and send your troops through, along with the Trebuchets. After they're through, cover it up again and start attacking his castle with the trebuchets. 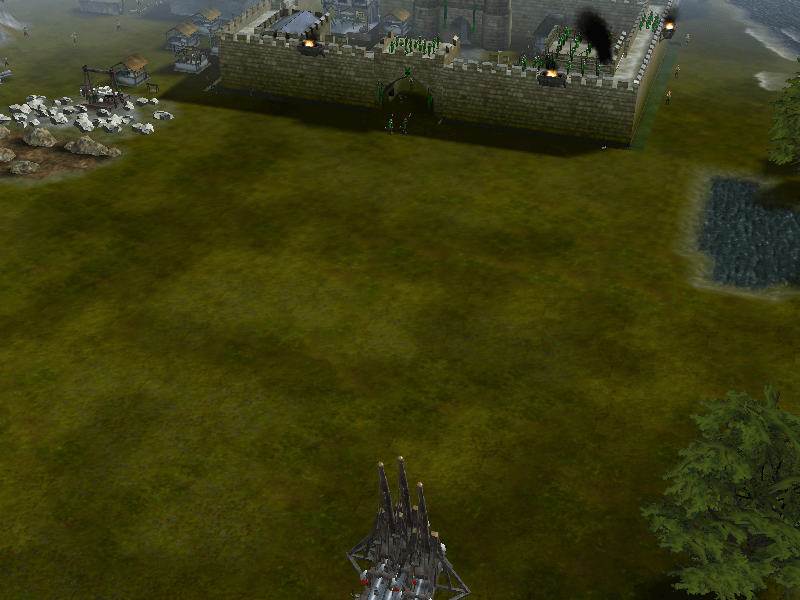 Now, just send your troops in and kill the lord, and it's very easy once his men-at-arms have all been killed!