No shoreline is complete without waves, and Stronghold 2 finally introduces this most desirable feature:

To place waves, go in to the water palette and then choose the waves tool.

Now move your mouse over the map and you'll see the waves appearing. When you have the wave positioned where you want it, left click and it will be placed on the map. 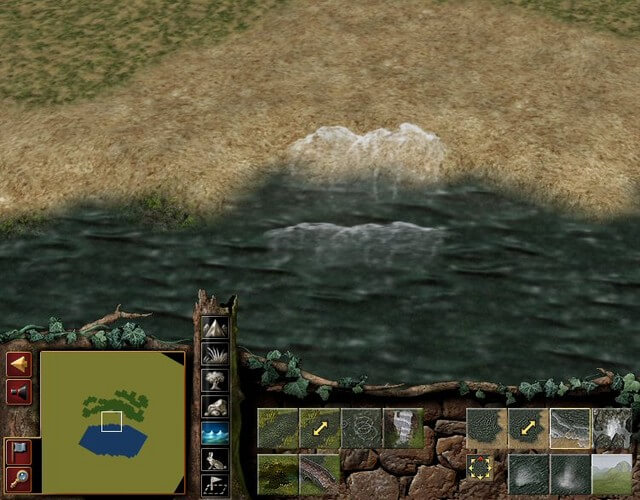 You don't really have any control over the direction of waves - as soon as you move the wave over the shore, or even close to it, the game will make the waves head towards the land. This generally makes placing waves along a shoreline quite easy to do as you don't need to worry about the direction of the waves. One important factor to note before placing the waves is that the sea should be going in the same direction as the wave you are placing. Normally the sea will be heading towards the land and so will the waves - your map will look slightly odd if this is not the case!

There are many cases when you need more control over the direction of waves placed on a map. For example, we want waves on this shoreline but the game has automatically chosen the wrong direction (as shown by the white arrow): 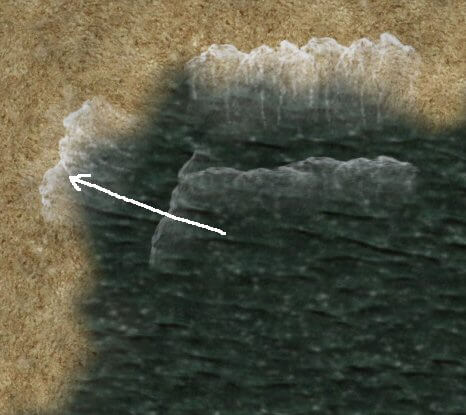 This has happened because the game knows that the land to the left is closer than the land at the top, so it changed the direction of wave to the left. In reality, one set of waves going in one direction and then another wave going a different direction next to each other doesn't happen. And it doesn't look right in the game either, so we need to do something about it. To get around this problem, we could either hold down the right mouse button, turn the wave in any direction until you find the spot you want (the easy way) or if somehow this does't work, place a little island in the middle of the sea and then move the mouse around it to get the desired direction for the waves. 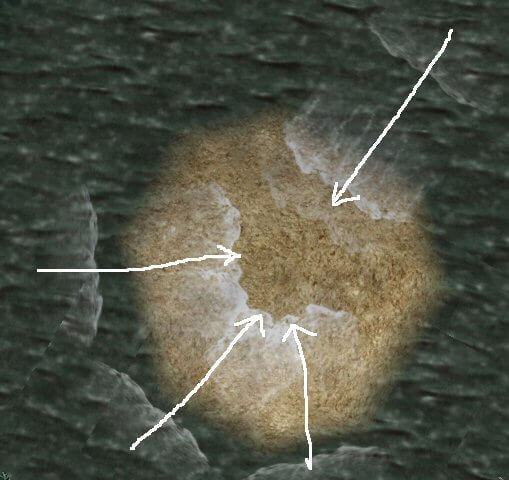 As you can see, you can get just about any direction for the waves by moving around this little island. We want our waves going in the same direction as the sea, so we need to use the bottom of the island: 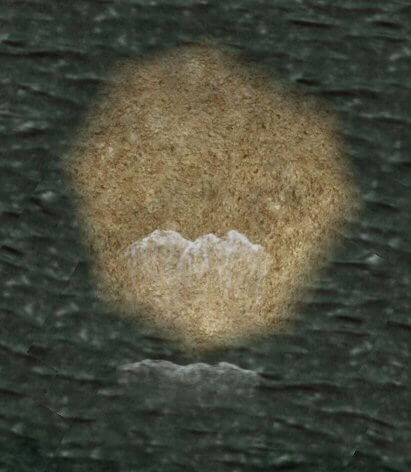 As you now know, if the mouse is moved near any land, the waves will suddenly "snap" to face towards that piece of land. So to stop this from repeatadly happening, we need to use the keyboard to move the map. Using the arrow keys on the numeric keypad (make sure "Num Lock" is off), scroll the map until the beach is under the mouse cursor - and as long as you don't move the mouse over the sea, the waves will remain in their previous direction. Just click the mouse and the waves will be placed. 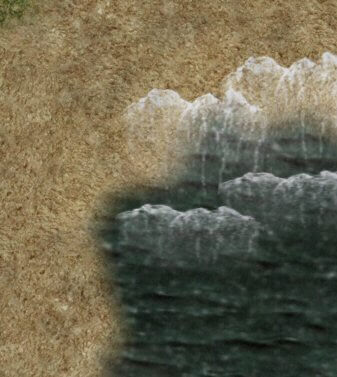 In order to erase waves, you need to have the water palette open, and have the wave tool selected. Secondly, select the eraser tool in the top right corner. When you move the mouse over a wave, a red box will appear around it, as shown below, so you know exactly which wave you are deleting. 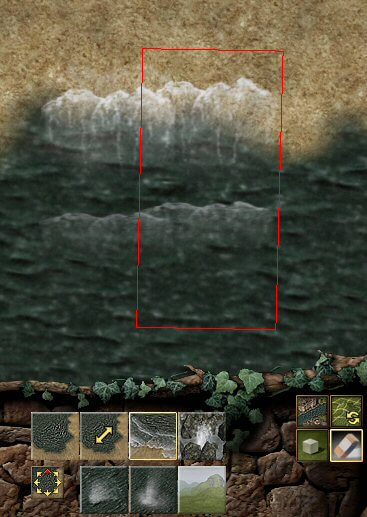 Just left click, and the wave will be erased.

You've also probably noticed that waves are all exactly the same size, and there seems to be no way to get wide waves that run all the way down a shoreline. However, by placing several waves side by side, you can achieve something that looks similar to the following: 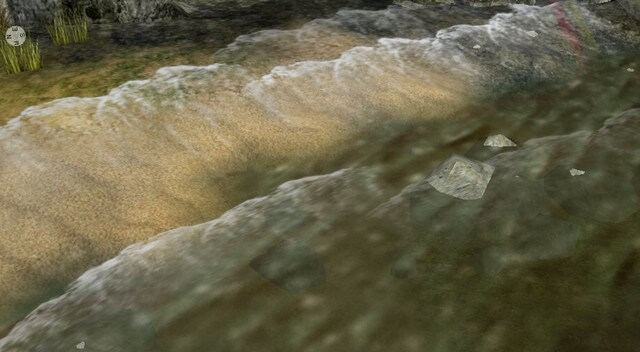 Unfortunately, there is a little more to do than simply placing waves side by side. The following example illustrates the problem: 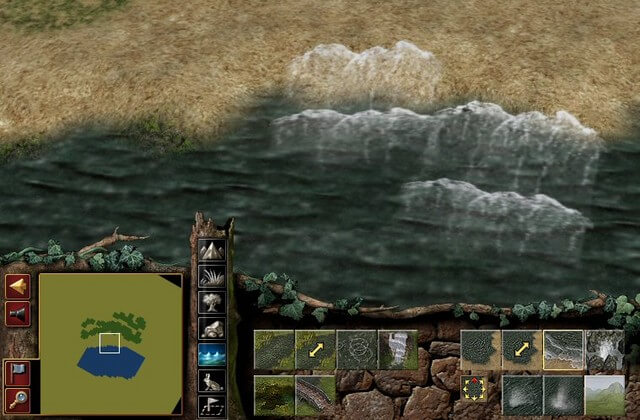 As you can see from the picture, the waves don't automatically synchronise - one is further up the beach than the other. In real life the sea doesn't come ashore in isolated strips so once more we must fiddle to get things right.

When placing several waves next to each other, you need to adjust the placement of them to make sure they are prefectly synchonised with each other. 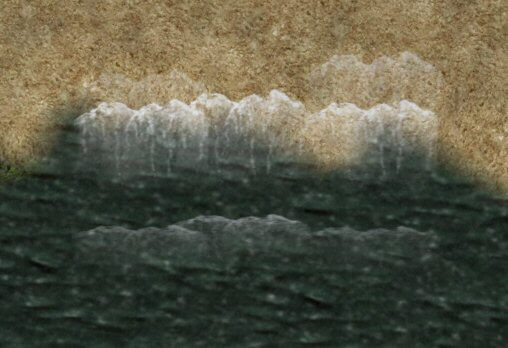 However, the only real way to accomplish this is through trial and error - and in many cases, even if new waves appear to be syncrhonised prior to placing them, when they are actually placed, they suddenly loose their synchronisation. As such, you have to remember where you placed them, erase the new waves and then try again in a slightly different position. But it's well worth the effort! It's often the small things that make a map look good.

One of the most impressive features of waves is their ability to follow the terrain height. As you might have noticed on the pictures earlier, the waves go up the sandy beach. But it's not just sand they go over - they'll follow the outline of all terrain. And as well as the waves going up on to the beach (which is a slightly higher level than the sea where they start), you can also see the waves crashing against cliffs. Here's a closer view of the waves crashing up the cliffs: 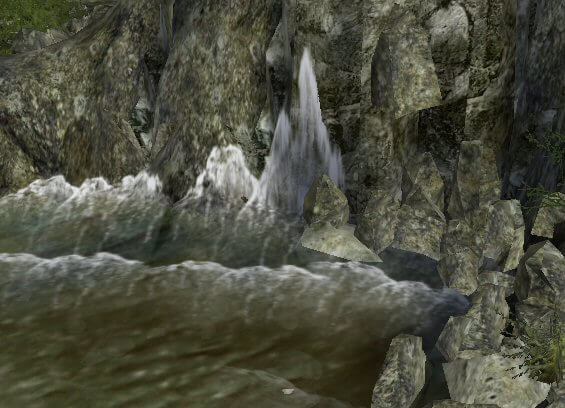 You can take this to the extreme of course - because we know that the wave will follow the height of the terrain, let's see what happens when we put a single cliff spike in the path of a wave: 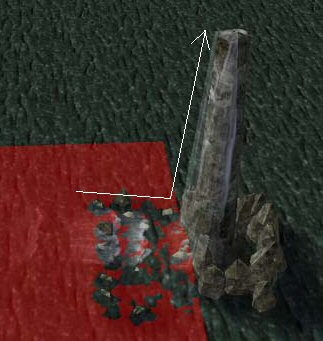 The wave climbs to the very top of the cliff and even starts going back down the other side this time! No mountain is too high for a wave!

Obviously though this is something you should be aware of when placing waves at the side of cliffs - you should watch them to make sure they don't suddenly shoot all the way up the cliff. A little splash is not really a problem, but as our last picture shows, it would look very unrealistic for a wave to suddenly jump to the top of a cliff. While waves will follow the outline of the land, they will also completely ignore things like rocks, plants and buildings: 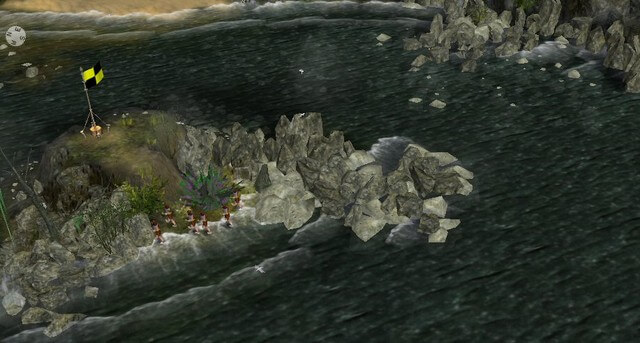 If you have a mixture of rocks and cliffs at a shoreline, the waves will only crash against the cliffs and will simply dissapear under the rocks - which can be clearly seen if we zoom in on the island: 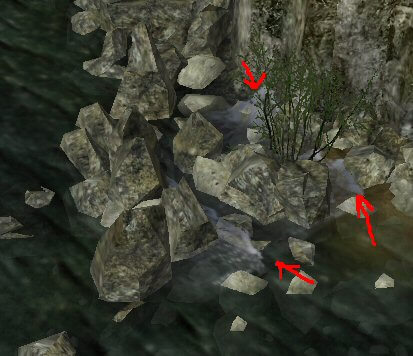 The red arrows at the bottom show the waves travelling under the rocks. The red arrow at the top shows the wave starting to climb the small cliff. Waves will also go under buildings, including castle walls.

One great aspect of waves is that they can be placed anywhere, not just on a shoreline. When placing the waves on anything other than sea, their direction will not automatically change and will remain the same unless you use our little island trick shown earlier. In some cases, it's actually easier to place waves for the shore prior to painting the sea as it ensures they will all be going in the same direction.

You can easily make your rivers look more interesting with a few well placed waves - get the waves going in the desired direction using the little island shown previously, then scroll using keyboard shortcuts to get to the river.

Here is another example of some waves, this time placed under a bridge - they were actually placed at the complete opposite end of the bridge so they go all the way underneath: 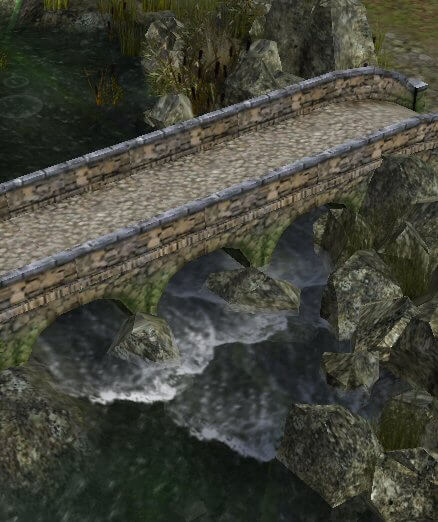 In most cases however, waves can be a bit too overpowering for use on a river bank - but by using some boulders, rocks and plants we can hide most of it: 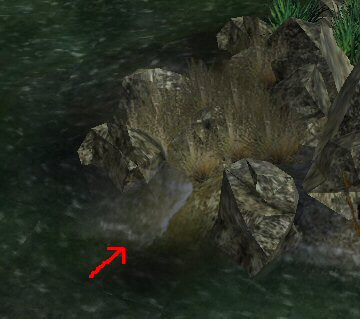 As you can see, only the start of the wave is visible, the rest is hidden by the rocks and plants. Use waves sparingly on rivers - only where they really improve the visual effect of your river to get maximum impact on people playing your map. 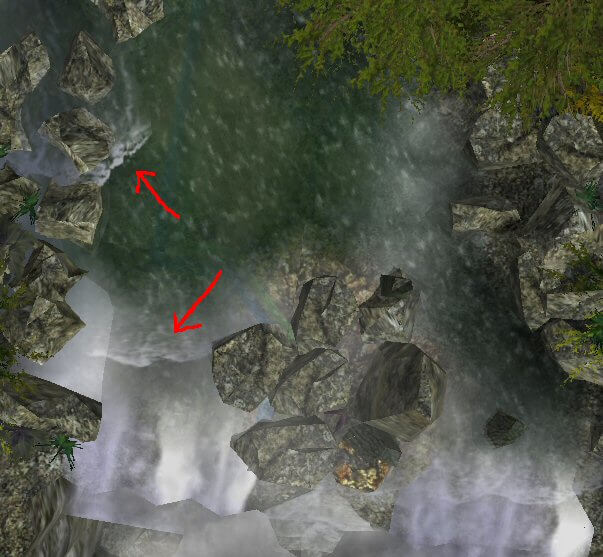 We've already shown waves climbing up cliffs, but did you know they'll go down them as well? You can make waves go over the edge of the waterfall so that the wave begins at the top and makes its way down the waterfall - here's where our wave starts: 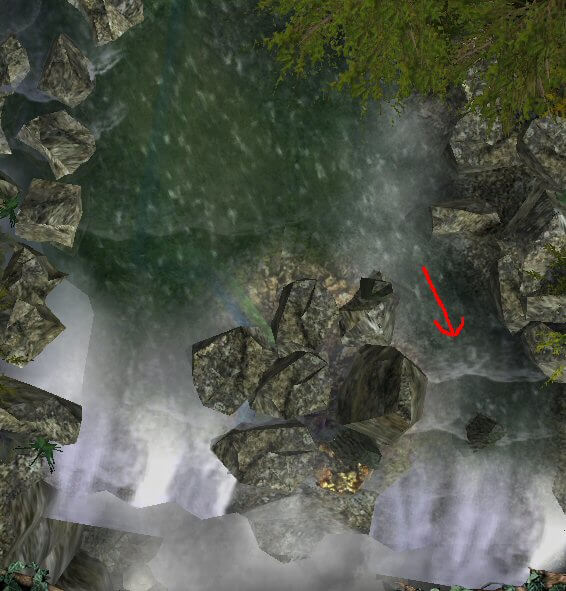 It goes over the edge and right down to the ground. This trick came in handy as this waterfall was split in two sections but occasionally water was needed to pour over the middle section. 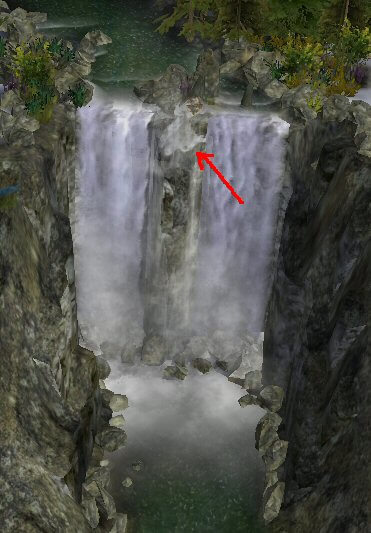 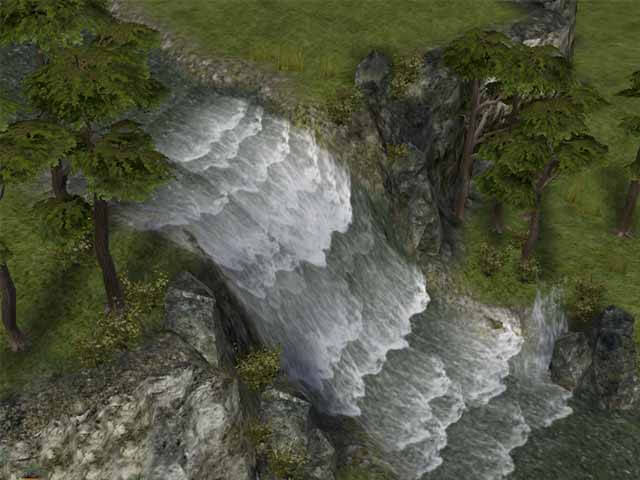 You can also use this sort of effect to depict rapids, etc.

Most shorelines will be tranquil places such as this one:

However, by going a bit crazy with waves, stones and shipwrecks, you can create a much stormier scene: 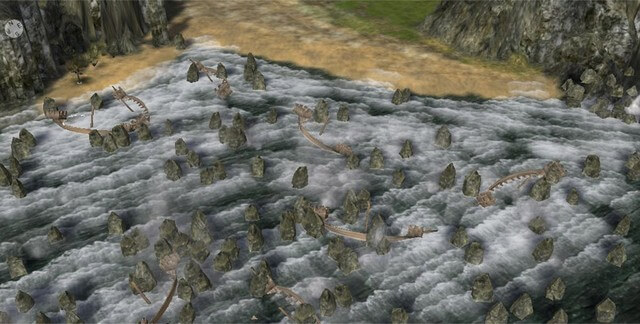 As you can imagine, the picture above required lots of waves. So many in fact that a limit was reached and no more waves were able to be place. So be warned, if you are planning on doing something like this make sure you place all your other normal waves first and then use the amount remaining for the stormy area.

It should also be noted that such scenes can cause problems with slower computers and graphics cards - just as lots of animals can cause lag, so can this method.

If you want to add a distinctive water feature to your map, why not try something like this? 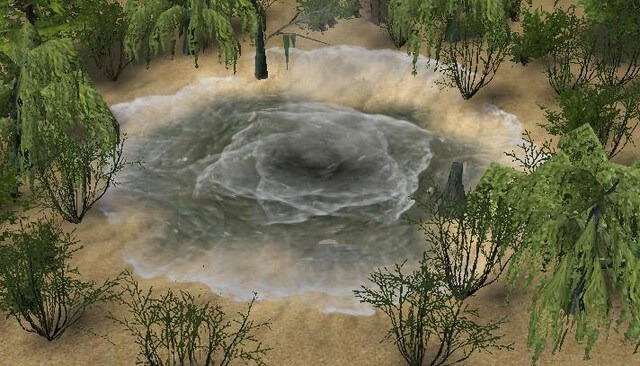 By putting water spray or mist in the middle (you can just see it here although it is much more obvious when animated in the game), you can turn a water hole in to a fiesty geiser! There are also plenty of other places to use waves, here we've got them lapping against rocky outcrops just off the shoreline and even a shipwreck:

One other important factor to link in with waves is sound effects:

By adding sound effects, the realism of your waves goes to a completely new level!