Here we are, at one of the weakest castles you'll have the pleasure of defending. You have two thin walls to defend at once, and very few starting troops.
Hurriedly place a stockpile near the iron, 2 mines and 2 tethers. Build the granary nearby with a few chicken farms, they are the most space efficient and space is in short supply. 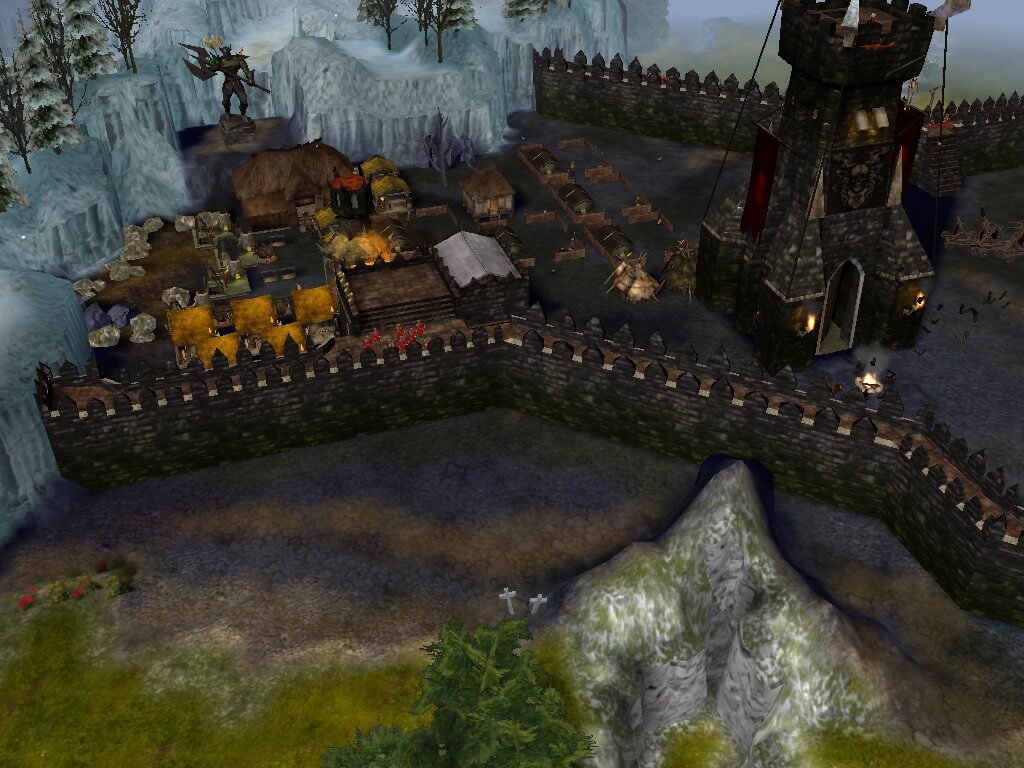 You should delete the gatehouses and towers, replace the gaps with thin walls. Sell all of your iron and stone, use the money to buy wood to produce more stone and iron facilities.
I settled for 4 iron mines with 6 tethers, and 4 quarries with 8 tethers. Build houses as needed.

In this order, build an armory, barracks, and sorceror tower as soon as possible. After the armory, build fletchers and poleturners and train as many spearman and archers as possible.
Sell your iron for any emergency cash needed for troops or stone. If you are bold, build a few armorers and blacksmiths, but it is generally a good idea to keep the honor for fantasy troops.

Send Vlad to the top of his keep, and move troops wherever there is pressure along the wall. After your troop-producing buildings are up and running, use any other stone to make your walls two layers thicker. If you have more than 100 in reserve, sell it.
Remember to keep space for pitch on the outside. Also remember to keep buying wood, and keep that armory empty by training troops!

The first attack comes from the north. Send all of your troops to cover that wall. Make last-minute stone and pitch defenses if needed.
Keep all of your troops on the walls to push off ladders, use your stake hurlers to target siege engines and groups of enemy swordsmen on the walls, and do not let the enemy breach your defenses! Pay attention and make sure your buildings, especially your granary and farms, are not destroyed by trebuchet fire!!!

The second attack also comes from the north. Do the same thing as last time, but be increasingly wary. You aren't the only one with more troops!

Third attack, this time from the south. The trebuchets will settle in the little gorge, and you will be unable to fire upon them. Just sit out the bombardment until their troops are dead, and they will vanish.
After this attack, start preparing a dragon egg. Even if you don't need it, it'll be another fun way to dispatch your foes. Place oil tippers and fire drakes if it fancies you.

Fourth attack comes from the south again. By now you should know how to deal with the enemies. Save your dragon unless you are in dire need. This one will end just slightly before the last one, so hope that your sorceror's tower is not destroyed!

Fifth and final attack. This one comes from the north. You should be a pro at defending this poor-excuse-of-a castle by now. But wait! Another enemy army comes from the south! Use your dragon to destroy the trebuchet, and micromanage your troops to best effect. Good luck!
If you made the mistake of sending all of your troops to the north wall, send them to defend the keep as soon as that first wave fails. If you placed a fair number of fire drakes and used your dragon to good effect, then you should come out fairly safe.

Are you still reading? Good, you survived! But it isn't over yet. This metaphorical ice cream sundae needs a crowning cherry: a final victory against Radu and his friends!

As per usual, a saved game has been uploaded to the downloads section for this mission, and is available here.