We're greeted by a cool cinematic displaying the deadly yet humorous powers of the werewolf launcher. Why Vlad doesn't use that to catapult himself and his men into Transylvania, I do not know. Hey, we don't start with it! Silly canines must've stolen it ...

Spend all of your money buying wood.
Place your stockpile near the iron and the path leading down to the stone. Put your granary near your keep for safety.
Put down 3 iron mines and 3 ox tethers near them, then 4 quarries and 8 ox tethers down in the pit. You'll need that iron to sell, since you'll want to keep your stone.
You will have to use all of your starting stone if you want to survive. Put down your Armory near the Stockpile, but use your Barracks as part of your fortifications. Your starting base should look like this: 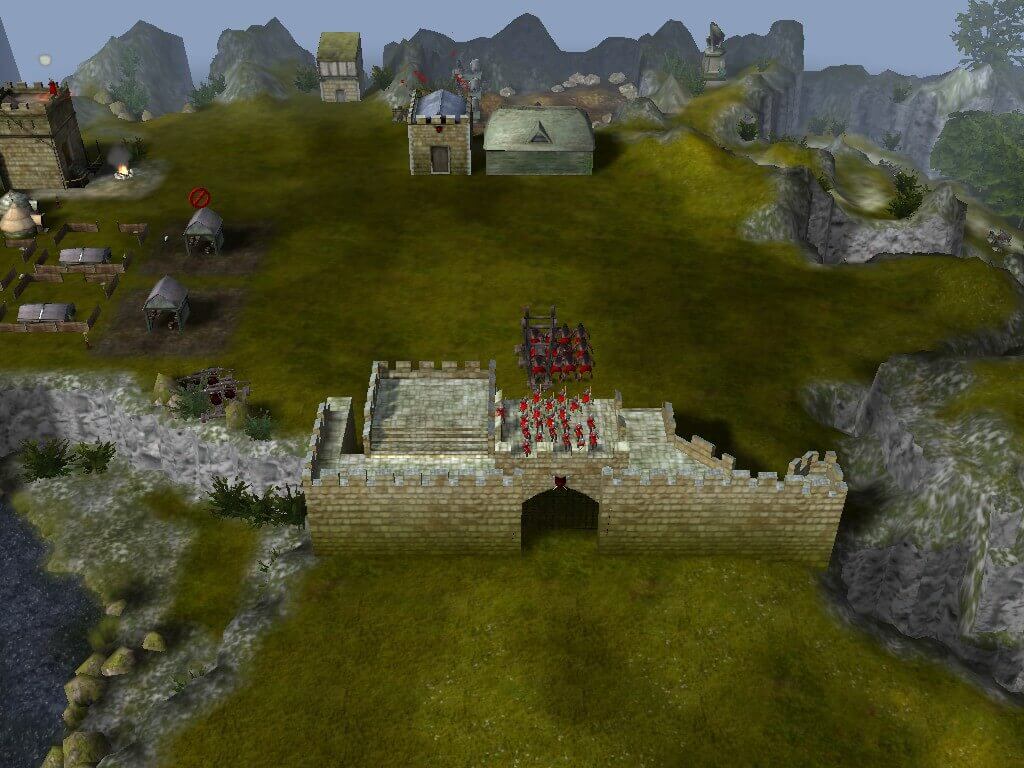 With one wall to defend you can stack it up pretty well eventually, but if it is breached then you will have a tough time holding off the invaders. Put your archers and spearmen on the walls, your lord in the keep, and your stake hurlers near the cliff's edge.
Plop down a pantry in the far north, and a house near the pre-existant one. But, oh no, you're out of wood and money and don't have enough workers! Put your iron mines and the 3 nearby tethers to sleep for the time being. Gather some stone and sell enough to buy some wood. You'll also want to get 2 apple orchards and 3 chicken farms when you can.
Build a few woodcutters after you have a steady food supply. Place these in the pit. Build houses as needed.

When your first shipment of stone is halfway up the cliff, your wolven allies will arrive with the launcher. Keep them behind the wall until the first attack. Send out the wolfmen to demolish the siege camp and kill the enemy archers and crossbowmen.
The enemy will keep sending increasingly larger waves. Just keep sending out your werewolves to hit their "soft" (non-pikemen, non-swordsmen) targets.

Don't worry about selling too much of your stone for troops, the werewolfs can handle the job without you needing to place any weapon makers. Eventually you'll get 1000 stone, and this marks the end of the chapter.

A saved game for the mission Radu is available here in the downloads section.