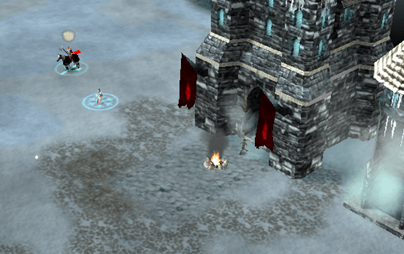 This is a particularly difficult mission, especially if you are new to Legends. The very first time I attempted this mission myself, I was unable to complete it due to how hard I found it. Looking at the amount of troops the enemy has at the start shows it is a very easy mission, however, many are later sent in invasions. Seen as you start with hardly any troops, you will not last you very long without stone for a castle. For this reason, you should build your stockpile next to the trees. Then place your granary fairly near the hovels. This later gives you the option to block your granary off completely from any attacking invaders (and your two towers) by building a wall straight down as any attackers must go all the way around the cliff to get to it.

Then start off by placing two wood camps and one stone quarry. Next, buy five wood and build a dairy farm. Quickly place a barracks and armoury, then recruit ten archers and garrison them in your lookout tower. And yes, you'll now be under attack. Don't worry though, as it's only from a couple of werewolves who will attack some swordsmen and get killed - but it serves as a warning; this mission will not be as easy as the previous ones. Place an ox tether and several apple farms, seal holes and as many fletcher's workshops as you can. You'll need all the archers you can get. Then place another wood camp, a castle pantry, two vegetable gardens, a pig farm and eel pond - unlike the other missions, you're not likely to get very far without honour this time.

Build the entirety of you wall (which should be build next to the lookout tower for maximum effect) and when you have enough wood, build four iron mines and two ox tether nearby them. This will serve as the majority of your gold during the mission. Don't worry, the next attack will not destroy those as they are too near your towers. It will head for your stone quarries instead. Bring your swordsmen together and send them next to your gatehouse (preferably inside so they are not at risk from being attacked by the attacking giant demonic bats) and build another iron mine. If your stone quarries are destroyed (highly likely) rebuild those as well. There are also some archers in your keep that can be moved to your gatehouse for better defence. When this attack comes, it will contain a siege camp, but your troops should be able to hold it off from the lookout tower. 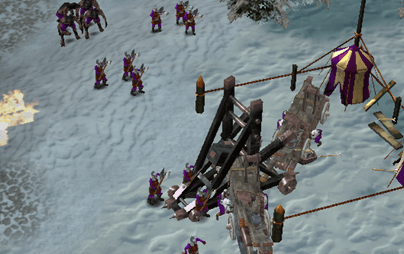 You should have a good supply of bows now, so sell some of your iron and recruit some more archers. Now you have a steady income of iron, you can afford some units from the ice tower as well. White Witches are best in this early stage as you can attack units from the air who are attacking you.You'll find this makes it a lot easier now - especially in groups, white witches are very useful. You're almost ready to begin your own assault on the castle, first buy several more white witches and make sure you can hold off the enemy invasion which contains a dragon. Note that siege camps are always built in the same place, so you can station troops there who can dismantle the camp before the equipment gets produced.

When you have enough gold by selling iron, buy a dragon. Consider the time for the dragon to get prepared the time until your invasion. You must have twelve frost giants and roughly fifty white witches. If you are low on honour, you can capture the stone circle next to the enemy gatehouse. Then when you're ready to attack, send your dragon in to attack the units in the engine tower. Once frozen, turn to archers in the lookout tower, before freezing the archers in the engine tower once more. Then send your frost giants in and destroy the gatehouse, as well as the lookout towers and engine tower. Finally, send your whit witches in and kill off the remainder of the troops. If you're lucky, you might kill all the archers with your dragon. 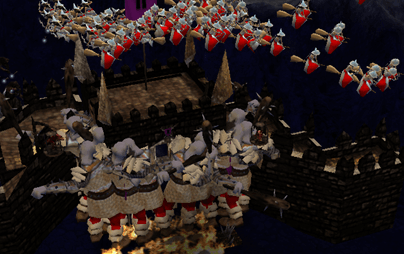 After you destroy the main gatehouse, pull all your white witches back. There will be two or three dragons that suddenly appear on the map attacking you - so the best thing to do is to send all your frost giants to destroy all the walls and send your white witches away for a while, until the dragon timer has gone down and they go. 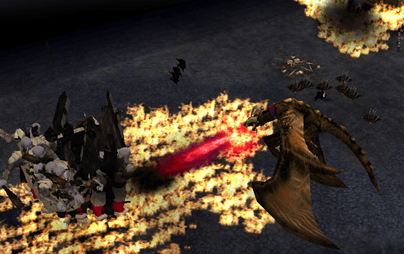 Now, just kill the enemy lord, and send a couple of quick units to the top of the keep - easy! 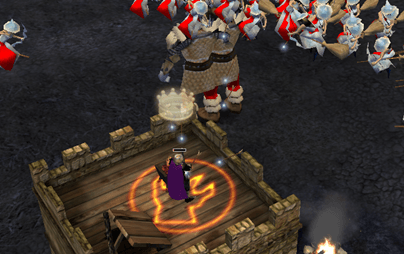 You can download a saved game for this mission in our downloads section at this link.