Ice - The Land of the Giants 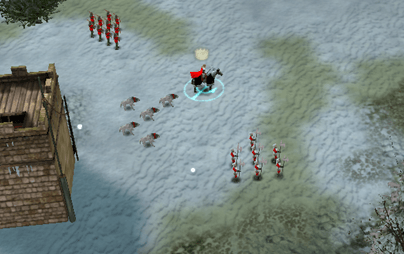 Your estate is very small and there is not much room for building. Therefore, you need to maximise the output of your buildings by cramping them together as much as possible. So first of all, place your Stockpile next to the stone. This helps with two resources: stone and wood. By placing it next to the iron, then you are limiting all other resources apart from iron. Secondly, place your granary to the top right of your keep next to three trees - this ensures that it is as far away as possible from any enemy attacks.

The first buildings you want to place are two wood camps, one seal hole and one apple farm, one stone quarry and one ox tether. While you wait for the next supply of wood, you should garrison your lord in your keep along with your other troops. Place your barracks and start building a wall around your keep only - but keep it small. By this time, your wood should have arrived, so place two hovels as close as you can to the keep and then another stone quarry (along with another ox tether) and some different food buildings - the more variety of food eaten, the higher the honour bonus you will receive. Next place another wood camp at the other end of your estate, left of your keep.

Now, place an armourer's workshop and a blacksmith. On the other side of the hill where the stone is placed, you can find some iron. Place four iron mines and two ox tether there. Any time now, the first invasion will happen. It consists of two polar bears who will proceed to attack the wood camp to the left of your keep. Make sure you have your archers stationed nearby, but also with your white wolves and pikemen. Bait them with your archers, sending your hand-to-hand troops in, and then send your archers back to your keep making sure they are still in range. 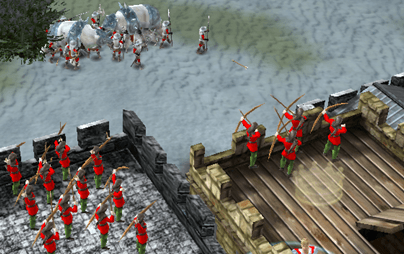 By now you should have enough stone to almost completely build your castle walls. Keep all weapon production buildings inside your castle walls, and the food buildings outside - they are much easier to replace should you get attacked and a lot less important. You should also build a pantry and a couple of vegetable gardens, pig farms and eel ponds to generate some more honour. This will help you to recruit troops from the ice tower should you not have enough standard weapons produced, which is highly likely.

The next attack will contain a frost giant as well as polar bears, so make sure you have a completed castle for it. And with the exception of your archers, your troops should be outside your castle walls. Make sure to target the frost giant first as he poses the biggest risk. Once he is gone, you don't have to be quite as worried, but do note that polar bears can destroy walls as well - however, they can't get into your keep.

You'll notice now that you're seriously down on troops. So you should build two fletcher's workshops and two poleturner's workshops inside your keep. The attacks will now continue to get more frequent, and much heavier, so you need to build as many fletcher's workshops as you can in order to fight them off. However, you can buy weapons if you are in desperate need for them. Buy as many bows as you need to get roughly 80 archers as quickly as possible - you'll find lots of resources to sell in the stockpile which will help you get enough gold.

Build more towers, and station some troops in the newer ones as well. But don't keep them far away from your keep otherwise they will get destroyed. Towers (especially lookout ones) are the key as they mean that you can target the attacking enemies while they are further away. 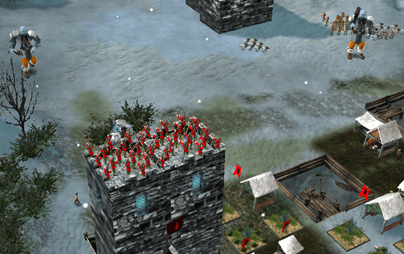 If you can withstand this attack with a lot of troops left, then you are safe and can start recruiting some troops to attack Orkis' castle. Polar Bears mean that you will not need any siege equipment. This is because they can destroy castle walls leaving you a pathway to get in. You should leave all standard troops to defend your castle, and only attack with troops from the ice tower. Recruit at least seventy white wolves, twenty polar bears and fifteen white witches. Now there should be a bigger invasion involving siege equipment. For this, try to keep your attacking force inside your keep and defeat it only with your archers and armoured units. 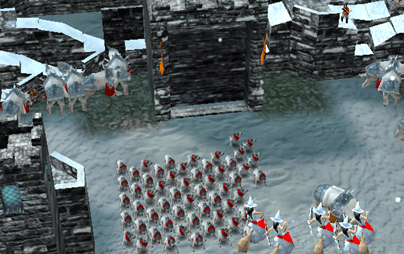 Once you get past the wall, probably your entire invasion force will get destroyed by an enemy invasion. However, the good news is that you don't need any troops on the ground now as you'll probably have destroyed all the enemy ranged troops - though it would be better not to do so, you could just rely on white witches to finish the job and kill Orkis. 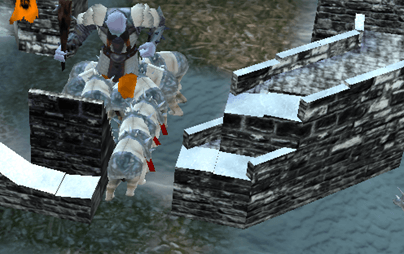 Get the saved game from this mission here in our downloads section.