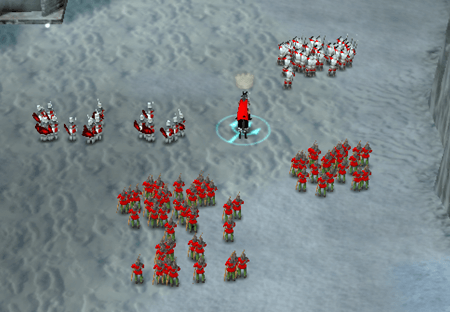 A fairly simple mission, you only need to kill the Dragon Fafnir who is north of your position. First off, send your swordsmen and pikemen in to attack the dragon, and send your archers up to the start of the high ground shortly after to kill the patrolling white wolves. Do not rely completely on your armoured troops here, as firstly you have enough archers, and secondly, you you need as much strength as you can get in armoured units to fight Fafnir successfully. You should know by know how tough killing dragons is from the first mission in this campaign. Using the same tactic, go near the other set of white wolves and provoke them into attacking. Once you've killed all the white wolves on the left side, some will attack from your rear and directly north, so be ready with your archers when this happens. 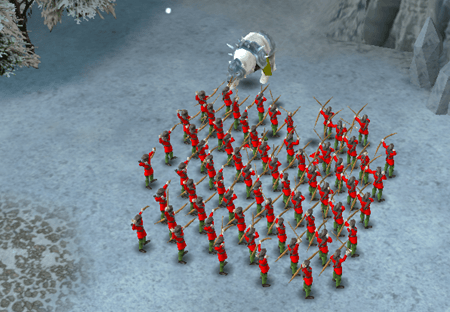 All you can do is watch the dragon very closely, and when it turns, move your men to the side where the dragon will not hit as many. This will avoid things like below from happening.

Keep your archers where they are, as the repeating invasions will not stop and they will draw the enemies away from your swordsmen. A couple more hits, and the dragon will eventually perish! And if you're especially running low on troops, try attacking with Siegrief himself - the Dragon will attack Siegfried before any other troop but he will not knock any troops over whilst attacking him.

For a saved game of this mission, click here.