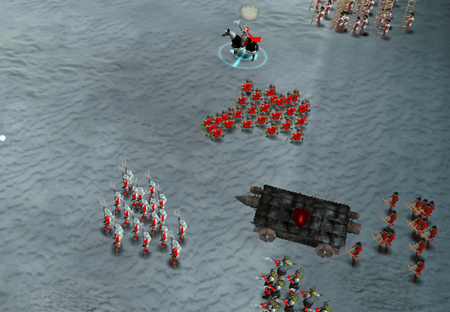 What appears to be a fairly simple mission at first is soon proven to be wrong. You have a very limited number of troops for what your task actually is. You must kill the dwarf king up in his keep, but the path to it is guarded by treacherous rose gardens, and troops to kill you as you go. Luckily the number of them is limited, but they are hard to destroy. Your troops must not walk on or over the rose gardens as they will be killed. The exception of this is your Shield Maidens - they can destroy and walk on the gardens without getting harmed. Use these units wisely, and do not waste them.

First off, move your archers and crossbowmen closer (as always, your crossbowmen closer slightly) to the Hell Hounds, but not close enough for the archers on the wall ahead to fire back at you. If you're lucky, your troops should all still have full health. So now it's time for you to get past the first gatehouse. Send your crossbowmen around the left of the two rose gardens and your archers around the right, both fairly close to the wall, but close enough to take the macemen out quickly. If you are feeling especially brave, split your archers in two and only send those in, leaving your crossbowmen behind - by the time they get to the wall, one or two of them will have died anyway.

Now bring in your shield maidens and destroy the first two rose gardens leaving the way open for your battering ram. Next, it gets slightly trickier; the enemy archers are now not only on a wall, but on high ground as well, meaning they can target you from further away. If you go any further forward than the first row of rose gardens, then the archers will target you. However, there is one fatal weak spot in their defense here - the right hand side has some high ground that you can get up to, which will help you take out the archers. Simply send your archers and crossbowmen round and the ones on the right hand side will be taken out in seconds. After they have all gone, pull them back, but keeping them on the high ground still. 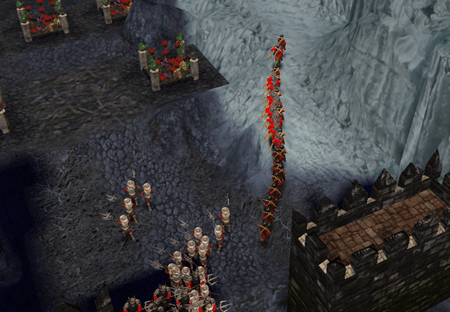 Since these are the last rose gardens you will have to face, you can afford to use your shield maidens to destroy them openly in front of the remaining archers (if any remain - in my case just 1). While this is happening, send your archers back up the high ground and they should be able to kill the remaining enemy archers upon the walls while they are distracted by your shield maidens. Now, bring in the laddermen! Try to place ladders on the right hand side of the wall rather than the left, as enemy archers will fire at you and your own troops will get distracted by units such as the pikemen and hell hounds below - or alternatively, take the gatehouse which will stop them. But before you bring in the archers onto the wall, make sure you place your pikemen and shield maidens next to the gate to stop reinforcements flooding in and killing your troops. 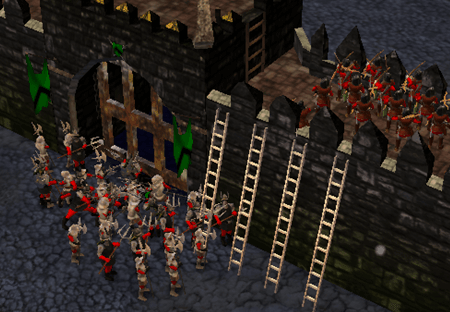 Now, move the remainder of your ranged units to the left of the wall and send all your other troops into the next courtyard, along with whatever laddermen remain to the wall. Again, if you are quick enough here, you can capture the gatehouse and stop enemies from attacking you. However, the exception here are the demons who can climb the walls to attack you. And the next part is, well, just easy. There are now no ranged units that remain, so just wait for all the demons to come closer to the wall and kill them. After they have died, just charge at the dwarf king, who isn't even in his keep! If you have any spare laddermen, send them in as well. These will take the damage instead of your troops, while your troops attack them. 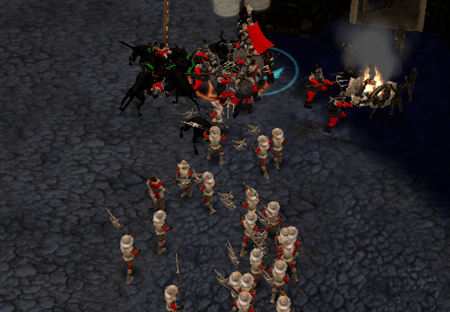 You can find a saved game of this mission in the downloads section, which is available here.