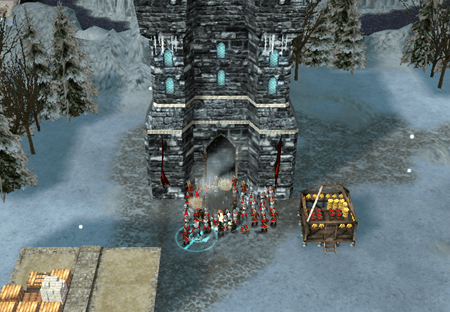 To start with, send all of your ranged units into your keep. It makes killing the giants a lot easier as they can't do anything to units that high up. Then, place two Wood Camps and Stone Quarries, two ox tether and an apple farm. You will have enough food to last until you next get a supply of wood for another hovel. Remember that you can also use the estate you now have (where Sigenot's castle used to be) to get more wood or food. Placing an Armoury and Barracks will show you that there are no weapons available, and everything must be created. So, you must first build fletcher's workshops to help recruit archers to take care of the frost giants. The first giant will come down from the left of your starting position, so be sure to station your troops there first. Don't worry about placing walls yet, and most importantly, don't try to build it around all your buildings or keep. This will only use up the space you need to build weapons and other buildings. With the next set of wood becomes available, build several iron mines and ox tether to transport it. This will help you create the armoured units you will later require. 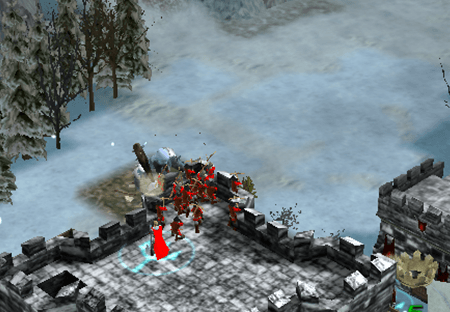 The first giant is always the hardest to kill; try to lure him towards your keep where your crossbowmen should be stationed, and just try to take him out. To try and avoid losing more than one builidng, attack him with your armoured units as well. Keep placing more buildings, and try to place the most important ones nearer to your keep. By the time the next attack comes, you shouldn't have many more troops - and this time it will come from the opposite direction. So make sure that you send some of your armoured units to the right of your keep to be ready. When you have enough stone, place a lookout tower (still centrally located around your keep) and send some newly recruited archers there. From now on, try to keep troops evenly spread in both directions.

Placing another lookout tower and manning some archers in there would be a good idea as it would mean that your forces are more spread. You don't need consistensy in your troops. Place several small parties of troops and that should be enough to keep them away. Try to keep the industrial side of your estate to the left as most attacks will come from the right. Providing you can place two to three lookout towers, keep archers in them and maintain a constant level of swordsmen or pikemen guarding each, no giants will get past and your industry will always remain intact.

Do not forget to place troops facing the way up the mountain drectly in front of your keep. An attack will come from there eventually, and if you aren't ready for it can take you by surprise. Using two towers to the left and some troops on the ground, you can easily kill the one giant who attacks at a time from that direction - keeping your industry safe. By now, you should be able to hold off attacks much easier, so you should focus on recruiting troops to go and attack the dragons. 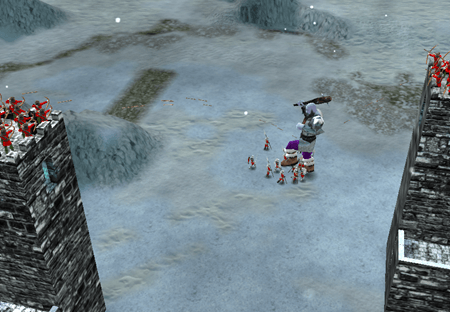 When you have roughly fifty troops, send them in to attack the dragons - but make sure that you leave troops behind as the attacks will not stop while you are attacking them - in fact, they will only become more frequent and heavier. Ranged units can't attack the dragon nests, so you can only use melee units. You will also need to send more troops in after two or three dragons because of the large amount of soldiers they kill - the exact reason why the units need to be armoured. 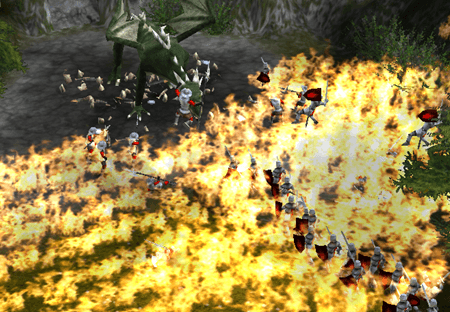 Finally, a saved game of this mission can be found here in the downloads section.