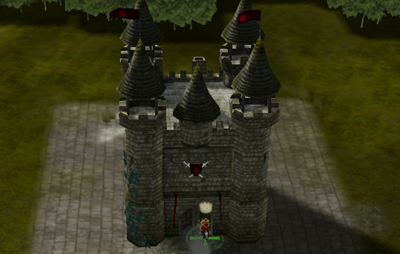 This is it! The final mission of the king arthur campaign. This is a single mission, fairly hard at first, but it does get a lot easier later on as the invasions always remain the same size. First off, place your stockpile behind your keep - placing it further towards the stone quarry won't really benefit you because it's such a long way out from the rest of your castle so your other supplies will probably be short (especially wood) and since one of the invasions will attack directly from your source of stone, this is certainly not the wisest move as your citizens will probably get slaughtered when going to the stockpile.

Also make sure your granary is placed left of your stockpile as outlaws will attack from the right of your keep. Then place two wood camps, an apple orchard, dairy farm and hovel. You also have 100 stone to start a simple defense. Outlaws will attack first from the right of your position, so make sure you have a barracks built nearby to keep them away. There are some basic weapons in your amoury to get you started, as long as you have peasants available you will be fine for the first invasion. Building single walls means that you can easily get a wall almost completely around your castle which will serve as a temporary defense until you get a supply of stone. At this point, you should probably have enough wood to build several Fletcher's Workshops and a stone quarry. An attack will come soon, and although you only have ten archers (unless you've bought weapons), don't forget you can use arthur's special power to call in knights to help. This is very useful at the beginning of this mission as it will save you quite a lot of time - knights are fast and very deadly against the men-at-arms and archers which are sent against you. With the help of Arthur's power, you'll easily defeat the first invasion and several more to come.

If you're ever short on gold (which is extremely likely to happen) then try selling some of the wood you have in your stockpile. You should be able to recruit more archers by this point which means you shouldn't have to use the special power for the next attack - which is just as well, as the third attack is much stronger consisting of saxons and hell hounds. So you'll need it for then as a siege camp is also used. If you can dismantle the siege camp before any siege equipment is produced, then it's a lot easier. It's still a basic attack this time consisting of only laddermen, but it's enough to wake you up still if you aren't paying much attention. 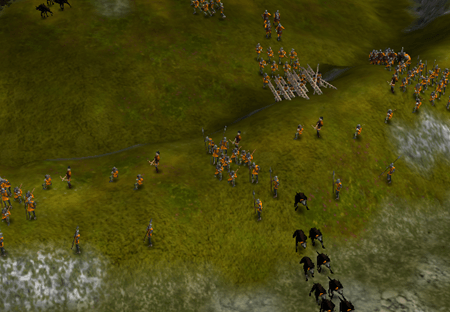 Place a few more food buildings then increase your ration level - you'll need a way to find more gold and complete your wall as you'll find your stone quarry is likely destroyed after that invasion. Now you should focus on strengthening your position so you don't have to use Arthur's power every time an invasion comes (from either side). Once you've accomplished that, use the power and take over some estates nearby - primarily, the iron mining one (you can also destroy the Outlaw Camp while you're doing this if you feel conident enough with the number of troops you have). However, the next invasion with the siege camp will not be as lenient as the first. This time, siege equipment will be used. So it would be best to summon the knights and destroy the siege camp before equipment is produced. Building the pantry and some buildings for that will bring in the honour you need later to recruit knights. If you have enough gold, a church would be useful - if you don't have enough gold, build some chandler's workshops and sell candles until you do. 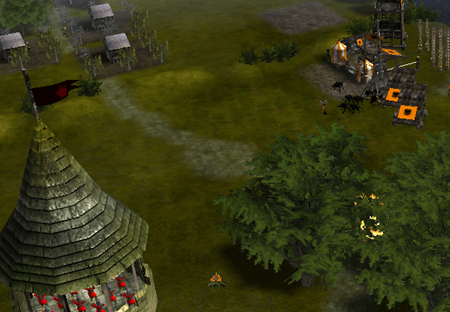 Once you can withstand an invasion of this size without relying on help from arthur's knights, that's the hard part done! Now all you need to do is wait until you have roughly 100 knights - send them to where the siege camp is built while you're recruiting them. That way no siege equipment can even be built. Your estate should now look something like this: 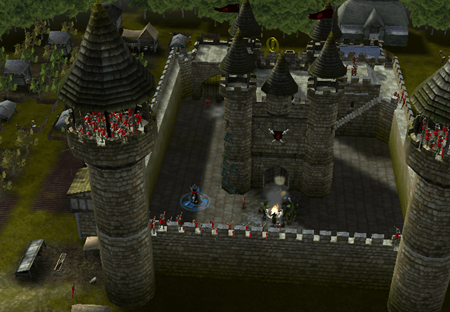 When you have roughly ten knights, take out the outlaw camp, if you haven't already done so. This will ensure that you get iron supplies constantly to build more armour and get a steady economy built up.

When you have enough knights (between 70 and 100), just charge at Mordred's defenses. You can bring your archers in for support of you like, it will kill Mordred's troops quicker. Now all that's left is to get to his keep and kill Mordred himself. 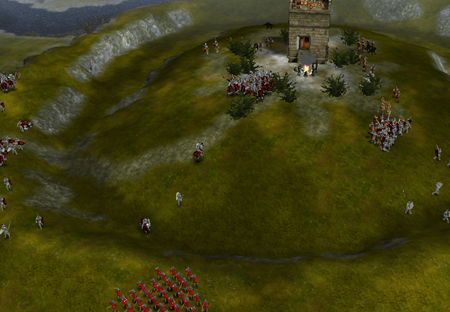 You can download the final mission as a saved game here - that was a very easy last mission - you never even had to use siege equipment!

Congratulations on completing the Arthur Campaign!