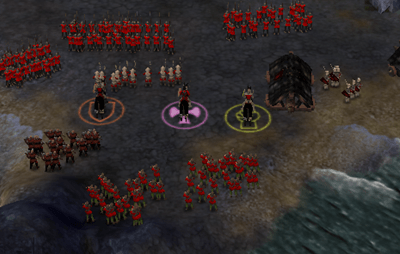 This is it; the hardest mission in the arthur campaign - you must get to the holy grail. From the second the mission begins, you're under fire from archers in the lookout tower on the left. With your lack of siege euipment, this means that you need to charge with archers to the lookout tower or you will get slaughtered. Sending your men-at-arms in would also be a good move as it means more of your archers will survive, but also more of their troops on the wall will be took out. You can then hit any units nearby, but be careful of hitting the vampiric creepers before armoured units are there to protect you as they will come and convert your units.

Send your macemen up to protect your archers as they are immune to the vampiric creepers. Finally, send your battering rams in to destroy the gatehouse. Now that is open, you will notice there are two routes; the left and right. It's probably easier to go left, but if you want to go right even though it's more heavily guarded, just we aware of the giant demonic bat. It will attack your archers if it's flying around when you come. It's recommended you send two or three men-at-arms in first so they get hit instead of a larger group. Wherever possible, try to avoid the vampiric creepers. They will only attack you if attacked themselves generally.

If you choose to go left, send macemen or one of your units on horesback to kill the vampiric creeper first. Then follow in with the rest of your units. Just a note: to give you an idea of the time frame, unless fighting, armoured units should not be stopped moving generally, you should constantly keep moving them on.

The chances are that by the time they reach your other units, they'll have moved on. Next, ambush the hell hounds that are on the walls to the north with some men-at-arms. Once those are gone, go down the pikeman path rather than the vampiric creeper. The archers in the engine tower attack you anyway, so you might as well get less casualties for it. Once you've killed those off, bring your archers in and put them in the engine tower to target the swordsmen below. 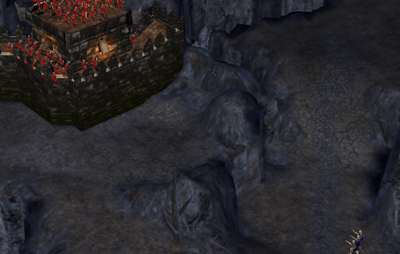 After that, send your men-at-arms down to receive the much needed reinforcements. If you make them stand next to where the archers are, they will throw their spears at them and kill them off. The hell hounds are easily killed, and then the reinforcements are yours! All you need to do is reach them and they will switch colours to red and you can control them. Don't forget that you can heal any wounded troops with Galahad's special power.

You need to destroy the archers, otherwise they will destroy your wounded troops. The manlets are easily destroyed, but make sure that you keep armoured units nearby as there is a vampiric creeper about. Well, those were the last archers to destroy! The only ranged troops now are a few crossbowmen and the sorceror. The way to get past the sorceror is to send two or three troops ahead of the rest of your army. The sorceror will then attack them leaving the rest of your troops safe passage - at least for a while anyway. 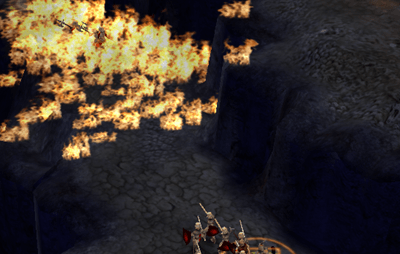 After getting past the Sorceror, send the remainder of your armoured units to attack the knights and send the three heroes further up to avoid them from being hit by the crossbowmen. Kill the remaining hell hounds on the way, and then the Sorceror. The steps now block him from attacking you meaning you can easily kill him. Now just go down the stairs and to the Holy Grail. 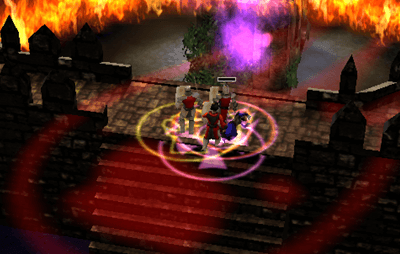 The saved game for this mission is available in our downloads section at this link.