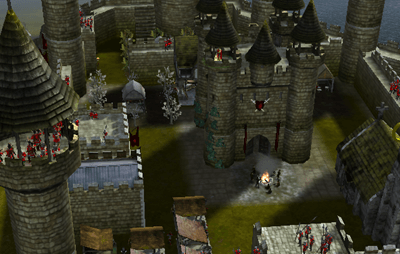 Back to Camelot once more, this time to defend it from saxons. You'll notice that the layout is exactly the same as last time you played this map, and the troops are in exactly the same place. You're glad you did so well now, aren't you! First off start by placing two or three Fletcher's Workshops. You need to get more archers. The invasions will start almost immediately, and the first will come from the north, so make sure you're well prepared on all fronts.

If you run out of building space in your castle, use the outside - killing peasants will distract the enemy from your own troops anyway so that's better for you. Lookout towers have great benefits, so use them to station troops. Your troops can't be killed in those, and they have a further range as well. Several other small attacks will take place, and then a bigger one with a siege camp will take place from the south attacking the main gate. Keep placing more buildings and spread your troops out that you recruit.

Several smaller invasions will come such as the one below, these should be easily dealt with due to the large amount of troops you have. 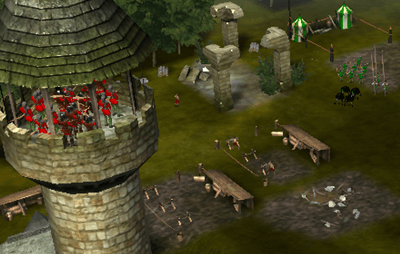 Don't forget you can use the Round Table to recruit special units as well, this will help you with hand-to-hand combat, and with merlin, you can kill saxons easier from a distance. Try to build more crossbows, crossbowmen are much more effective, especially in the towers.

The final invasion will come from the south, and directly attack the gatehouse. Do not be afraid to move troops to a better position. And you will need to have troops available to venture out and destroy siege equipment. They will attempt to send troops round to the east, so do not move troops from there.

You can download a saved game of this mission here.