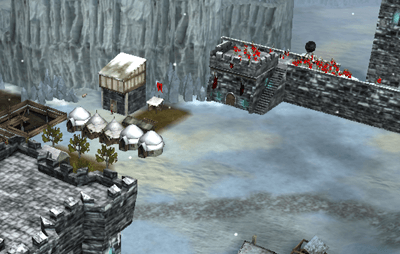 So, now your mission is to rescue Sir Lancelot from Morgan le Fay's castle. You need armoured units for this mission - the more the better. The attacks will not stop, so make sure that you keep up your ranged units as well. These will also help you kill many of their units firing at you. Spend a good five or ten minutes just building up your arms. Archers in this case are better than crossbowmen, so make sure you have more. Swordsmen are good, but move too slowly. Pikemen and Macemen are better for this mission. To make the witches' attacks easier to manage, you should build an Engine Tower and place a Dragon Harpoon in it. This will kill them much easier than archers can, and faster as well, so they do less damage. 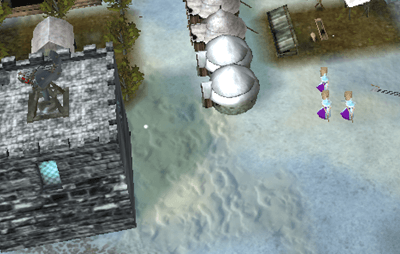 Once you feel you have about fifty men-at-arms, fifteen swordsmen and pikemen and about sixty archers, build a siege camp and buy five catapults. If you can't afford them, increase the ration level and start taxing your peasants. Then, send your catapults to attack the gatehouse - when they are just about to turn the corner and go up the slope, send your troops along with them - your archers first. Send several laddermen after that. The archers on the hill will target you, but you can't do anything about it - it's just lucky that the ice mirror can't attack them. 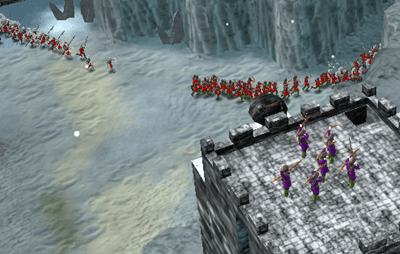 After you've captured that wall, you'll probably need more archers (and probably catapults) - so bring them in and you can sit back and attack the second wall from a distance. Then, you can get in without having to go all the way around to the second gatehouse. See the weak spot in the wall below? - destroy the Ice Mirror then go straight through to the second wall to limit your casualties. 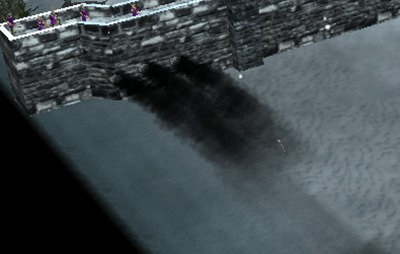 Now all that's left is to get through the second wall and to Sir Lancelot's cage. In fact, you don't even need to get to Sir Lancelot - just kill the archers in the keep and stay there until the timer goes to zero!

You can also get a saved game of this mission here.