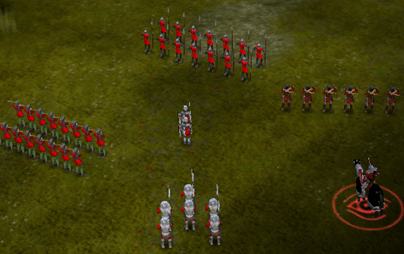 The red knight has left three knights in the way blocking your passage to the castle. You must defeat all the enemies on the map without running out of men. There is no time limit, and the enemies do not attack the castle, so you can take as long as you need to. Firstly, wait until Gareth's power has become fully charged, and then kill the men-at-arms in front of you. But do not go any further than that. Next to the stone structure are a lot of man traps - so, it's time to use Sir Gareth's power: right click on the power at the right of the screen and then centre it between the stone pillars, and then uncover the traps. Your troops can now pass safely and kill the remaining troops belonging to the green knight. 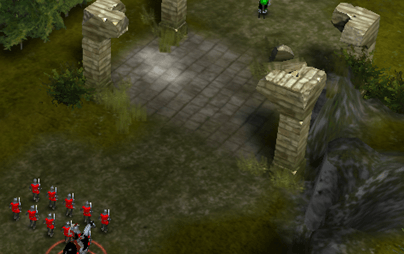 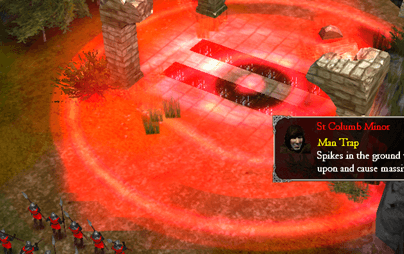 Next, kill the green knight. This shouldn't be too hard as you have plenty of fresh troops. What, you thought that was it? That's only one of four!

Next is the blue knight, and this time it is slightly harder. The two guards at the end of thr bridge can easily be eliminated. But it's getting over the bridge that's the problem. You can't send your ligtly armoured troops in because they will get slaughtered by the archers across the bridge - so you need to send your armoured units in instead. As soon as the archers begin to fire at you, send your archers halfway across the bridge and they will automatically fire at the enemy archers, then send your men-at-arms in to fight the archers while they are distracted.

You'll make it, but just. You should recieve reinforcements from the valley on the right. If not, go closer towards it and they should come. Now, is the easy part. You archers have a further range than their men-at-arms, so you can easily take the first row out through that method. Using the same strategy, lure the second row into a trap as well.

Keep your men-at-arms ready and intercept the enemy before they get to your archers. You should also have killed a few of their archers in the process. Now is the easy part. Send your archers to more than within range and then charge with your men-at-arms. After this, you can easily kill the swordsmen by the same luring technique. Now destroy those useless manlets and kill the blue knight. But do not go any further, there are more man traps to get rid of using Gareth past where the blue knight previously was. In total, there are four rows of them. You can get rid of the patrolling men-at-arms on the bridge by using the same luring technique.

Now just charge at the archers as they have no support. Further up the valley to the right are more swordsmen - you can either lure them or go into hand-to-hand combat, though I prefer the first option. You will also be given twenty archers as a reinforcement when you get across the bridge. Next, you need to take out the Outlaw Camp. The best way to do this is to send archers in to kill off all the Outlaws, and then send either men-at-arms in or armoured units to destroy it. Once the Outlaws have been destroyed, you'll need to double back on yourself and go up the hill on the right of the image below to eliminate the archers on the to of the hill - otherwise it's suicidal going further. Sending a group of archers up the hill will be the easiest way to deal with them. 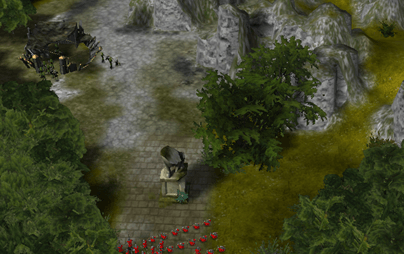 After destroying the outlaw camp, you should recieve some reinforcements from the valley from the corner of the map. If none come, again move closer towards it. Now your only task is to kill the yellow knight in the valley where you killed the archers on the top. Three down, one to go!

You should not go further than the stone ruins, as Sir Gareth is needed to remove the man traps once more. If the traps appear but do not get removed then you know that they were slightly too far out of range - like the image below. Once the power has been restored, then you can click over them again to get those traps removed. You can also send some archers up on the hill to the right - the men-at-arms will have to travel all the way around to get up to them so they can easily be killed.

Now you have killed off those men-at-arms on the other hill, take your archers there when the red knight's patrolling archers are away. When they return, open fire and they will all be destroyed. You can also kill the final lot of patrolling men-at-arms from this exact same spot. Now, for the final battle - send all your armoured units to where the archers in the tower are. They wil start firing at them, and in the meantime, bring your men-at-arms and archers forward and kill them off while they're distracted. You will also quite possibly target the nearby men-at-arms as well. If you are short of troops, go near the castle as you will get support from the nearby archers there. Next, send in your remaining armoured units supported by your archers and crossbowmen and kill the red knight. Finished! 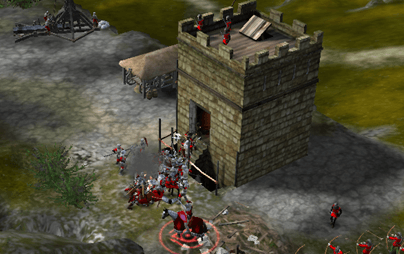 Your saved game for this mission is available here.