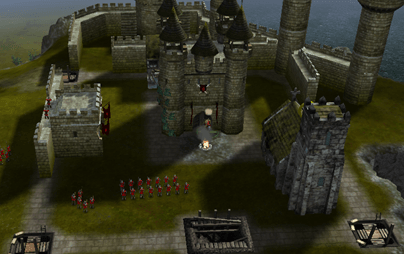 Your task is to build Camelot and have it complete by Guinevere's arrival. That sounds easy now, but you will need to fight off saxon invasions as well. So you should place your stockpile near the stone and make sure your granary is built inside your castle. This will stop invading saxons from destroying it. Place a stone quarry and several wood camps to get a steady supply of wood, as well as one apple farm next to the granary. 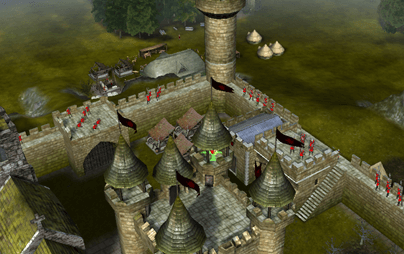 While you are waiting for resources, you can build part of the castle up, the walls as well as the gatehouse. To build this, click on the gatehouse footprint and then the "construct" button. You will be told that "a small group of soldiers are heading to the castle". Don't worry though, the timing is fine. Just keep building more buildings and construct the towers when you have a chance. The first invasion will come from the left, so make sure you have that side fortified first. Build several farms as well as weapon workshops to get a basic industry going.

Crossbowmen are much more effective than archers but have a shorter range, so they should go up in the towers. By the time Guinevere is roughly one quarter there, you should have the entire left side of the castle completed. Try and build several farms and increase the ration level, this will mean you can start taxing the peasants to get more gold for troops. If it helps, you can also build a gatehouse anywhere, and since no battering rams are used your peasants can get in and out of the castle quicker. 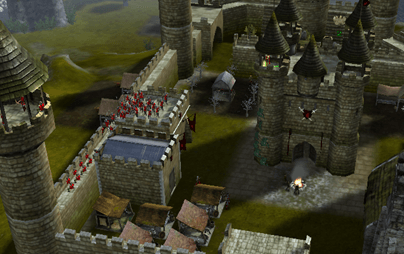 You must spread your army out - attacks will come from the noth west, south west, east as well as one from the north. But the stronger ones will always come from the west. Don't forget, you can sell goods to get gold as well - and you can buy weapons. Use the towers to your advantage - units can fire a lot further whilst in them. All you have to do is survive several more small invasions, one or two involving laddermen. It just gets too easy!

Your saved game of this mission is available at this page in the downloads section.