King Arthur - The Coming of the Saxons: Mission 3

Now Merlin has safely arrived, and you must capture the Stone Circle from the Saxon Warlords who hold it. You will find you have been given some stone when looking in your stockpile, so your first task is to finish the wall to the north. You won't be able to build a gatehouse straight away, but don't worry about that as your first priority is defense. Next, send some of your troops upon the newly created wall to defend from saxon attacks (which will come more heavily than last mission) 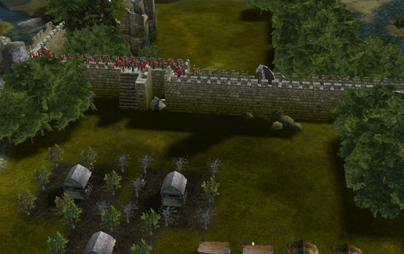 You should also place several fletcher's workshops because you will not be able to survive on the walls with just Men-At-Arms during this mission. If you want, you can also build walls on your other two fronts next to the shore. This will mean you can station less men here because the pictish boat warriors can't get past your wall. Currently, all you should do is concentrating on building up your army. Once you have an army a little over 100 Men-At-Arms, you are ready to begin your attack on the saxons, but don't completely leave your castle unguarded. It shouldn't take long before you reach the bridge. Make sure you bring in some archers to support your Men-At-Arms and then charge at the archers upon the hill on the other side of the bridge. Place your archers half way down the bridge to target their archers on the hill. 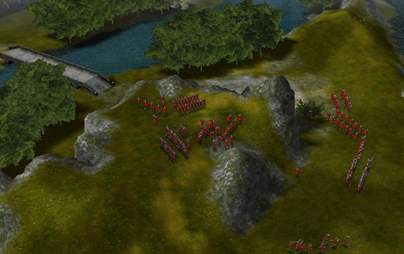 Once you have captured that hill, bring in Merlin and Sir Bedivere. You will need Sir Bedivere to bring down the walls due to your lack of siege equipment. You can also bring the remainder of your troops in now, no more saxon invasions will come. If you have enough honour, you can also buy a horse for Sir Bedivere to save some time, but Merlin must travel by foot.

Once Sir Bedivere has arrived, you must station him close to the wall, but send fifty to sixty Men-At-Arms in as well so that he is not the prime target. Once he is close enough, click the blue horn icon on th right side of your screen, then select the wall nearby. If a red cross appears through it, then he is not close enough. Otherwise, click the right mouse button and the wall will be blown to pieces in one place, allowing your troops to flood in. 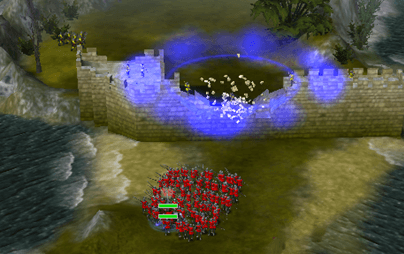 This 'special attack' can only be used once every so often, so you must wait for the blue line to get all the way around the horn again. This wall is slightly more of an issue, because it is higher than the first meaning you are in range sooner. Recruit about fifty more Men-At-Arms and send them with the rest of your troops while you wait for the power to recharge. 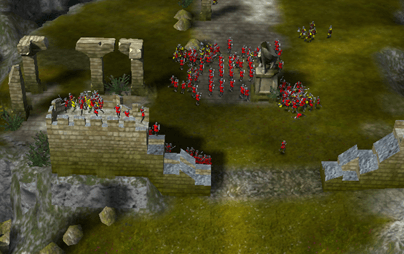 This time, send the entirety of your army up with Sir Bedivere to protect him and rush straight in as soon as the breach forms. Now kill all the remaining saxons and go to the stone circle. Done!

You can download a saved game of this mission here.