King Arthur - The Coming of the Saxons: Mission 2

At the start of the mission, you are told you must survive until Merlin arrives. With Saxon invasions as well as pictish boat warriors attacking from the shore, this isn't going to be as easy as the previous mission!

First off, split your troops. You will be facing invasions on three fronts; one south east from your keep from the sea, one south west from your keep - also the sea, and the other on land by the Saxons directly in front of you to the north. The first invasion will come from the south east, so make sure you have enough troops there to protect yourself. Providing you can kill the pictish boat warriors before they get on land, you will do fine. Next, you need to get an industy built up. Your troops will be able to hold off the saxons for a while, but really you need to build up more troops. This also strengthens your army meaning you are more likely to repel the saxon attacks. Build a wood camp, hovel and apple farm. 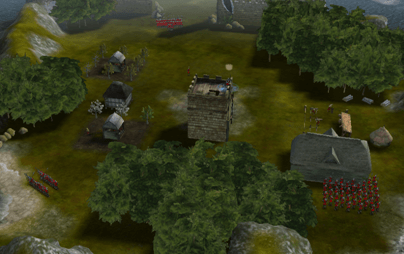 Next, build a barracks, armoury and poleturner's workshop. Try to build these as close to the stockpile as possible - the closer they are, the more weapons that will be made. You should focus on your estate for a while now, the warriors will be easily repelled by your men-at-arms. By this time, Merlin should be rouhgly half way there. The amount of invasions will increase, and you can recruit more troops to repel them easier. If you are ever short on gold in this mission, you can sell some of the wood, you'll have a lot by the end. If you feel the need, you can also venture out and kill some of the saxons while you wait, it will save you time next mission. By the time Merlin is nearly three quaters of the way there, the saxons will begin attacking from the north. You will easily be able to distinguish them as they are in green rather than yellow, and the third front is now opened up. 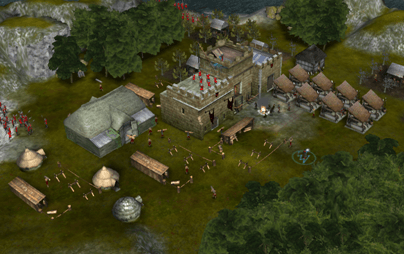 And finally, Merlin arrives - hooray! By now you should have a thriving settlement.

You can get a saved game of this mission from the downloads section here.