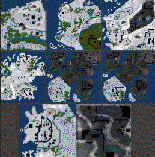 Short campaign based on Sinbad the sailor, but with a more nordic hero.

Follow Sigrund, liar, murderer and more. A perfect anti-hero who will travel through the frozen archipelago of the far North. Giants, dwarves and other strange tribes will make his trip very complicated.

And sorry for English mistakes..

0 Prologue
Sigrund was an adventurer among many others, except that his ambition surpassed that of his fellows. Equipped only with a sword and a helmet stolen from an ancient tomb and riding a stolen horse, our hero arrived in sight of the small kingdom of Craag Ulan. Not far from a bridge he found a knight and his escort attacked by a pack of wolves. With the knight in bad situation and richly dressed, Sirgund saw an easy opportunity to enrich himself. So he decided to watch and finish off the survivors.

0 Prologue-2
The knight wore a very beautifully crafted brooch. Sirgund rode to the dungeon of Craag Ulan where he learned that this man was the brother of the princess of the kingdom. Seeing the opportunity to spend a few weeks in the warmth he returned the brooch to the Princess, claiming that it had arrived too late and that the deceased knight's last words were for his sister. This is how Sigrund passed for a hero. He quickly seduced the princess and became Prince consort. But after a year the rival Kaal-Dragal's Clan demanded the hand of the princess and the dismissal of Sigrund. Mad with rage, Sigrund decapitate the emissary. War was at the gates of the kingdom.

1 The Lotophagus
Sigrund had brilliantly defeated the invader. Alas, it was his own sins that caused his downfall. The following year a member of the Prince's escort returned home. He recognized him and denounced him, Sigrund denied the accusations of course, he was a clever liar but his wife, the princess, knew Sigrund pretty well now. Realizing that he was lying and that it was he who was responsible for her brother's death, she ordered to her warriors to stop Sigrund. Sigrund still managed to escape and steal a boat. He decided despite himself that it was time for some adventures, far from this country.
After a week of wandering the seas he arrived on a welcoming island. In its center was lush greenery, as well as strange Lotus flowers.
The natives of the island welcomed him with open arms and with them he fed on these Lotuses. Time passed and his mind clouded over. However Sigrund sensed that something was wrong. When a ship of warrior women landed in the south of the island, Sigrnud decided to join them in order to clear his mind.

1 The Lotophagus-2
The Valkyries had been gathered by an old druid. The old man explained to Sigrund that he had created these lotuses by mistake in the past. The aim was to appease the suffering, but in truth the consumption of these plants had the power to make those who ate them forget who they are and where they come from. Shipwrecked people had found these plants and since their colony kept growing with all the pirates, settlers or adventurers who ventured on the island. The druid had finally found a remedy based on pitch, which could, according to him, cure the lotophaguses of their addiction. But to save this island he needed the necessary ingredients for its preparation. The Lotus Gardens must be destroyed and a large amount of pitch had to be gathered in order to cure the lotophagus people. It was also necessary to regain control of the dungeon where most of the lotophagus were located. Those most dependent on them will probably not hesitate to use violence to protect their precious flowers.

2 The dragon under the mountain.
The group of dwarves freed from the Lotophagus Keep were great interest to Sirgund. After taking the remedy they remembered their lifes. They had fled their kingdom a long time ago. Their King had gone mad, after digging too deep the dwarves had awakened a terrible dragon sleeping for centuries in the depths of the earth. The cunning dragon had quickly taken hold of the King's mind and most of his guards. Now the kingdom is on fire and blood. The dwarf rebels barely manage to contain the renegades in the mountains. Seeing the opportunity to take a share of the fabulous treasure of the dwarves, Sigrund decided to help them. After sailing a few more days, he arrived in the rebel fortress. With the help of the dwarves Sigrund would march on the dungeon in the heart of the mountain. The dragon's attacks were to be expected but Sigrund could rely on the terrible dwarf siege weapons. The rebel leader also planned to use the tunnels to free dwarf prisoners from their quarters and collect the gold he had hidden in preparation for the rebellion.

3 The Purple Empire
With the Mad King defeated and the Dragon pushing back into the heart of the earth, the only access was sealed. The dwarves will grudgingly bestow a large sum of gold on Sigrund for his help. Sigrund therefore set out once again for the adventure. After a storm he accidentally reached the legendary Mists Island where a Snow Witches congregation lived. On himself Sigrund tried to seduce their queen. With mixed success. He was not freed from his bondage until an evil army landed on the shores. It was the army of the Purple Empire. According to the witches, the Crimson Emperor was an ageless being who emerged from darkness a few years ago. He had gathered the barbarians, pirates, and wolf-man clans under his banner and coveted the entire archipelago. Sigrund's sword was returned to him and he was placed on the walls with the other male slaves.

3 The Purple Empire-2
During the fight, Sigrund learned that the Ice Queen carried with her a gem filled with pure light, the legend says gave her immortality. This gem could also be used to cleanse any demonic influence from a person, but the gem would be destroyed in the process. We can understand why the queen was so keen to keep her. Sigrund therefore stayed not far from the queen and the moment he expected arrived. The Queen's Guards were all dead from a silent wolf-man foray through the caves below the dungeon. Sigurnd and other slaves took advantage of the Queen's temporary weakness and murdered her. Leaving the other slaves to grapple with the reinforcing witches, Sigurnd ran to the docks and grabbed a boat, the Jewel of Immortality in his hands.

4 Land of the Giants
Sigrund might have lost his gold, but he had gained more. This magical gem would help him fulfill his dreams. Unfortunately the jewel could not produce gold or resources. Sigrund landed on an inhospitable land inhabited by two giant brothers, Grada and Draga. The two giants were foolish and seemed to be fighting over a hunting ground in the heart of the island. Sigrund saw the opportunity to free this land from the encumbering presence of the giants. If he trashes the ground at the centers of the island, the two brothers would accuse each other and Sigrund would only have to finish off the survivors. Thanks to the Ice Jewel, Sigrund summoned these allies to the rescue. It wasn't long before the Valkyrie longships, druids and dwarves landed on the island.


4 Land of the Giants-2
As a reward for their help Sigrund's allies demanded control of the island. Being outnumbered, Sigrund did not have other choice to accept. However, he couldn't hand the island over to both factions. The dwarves wanted to strip the island of all its resources and turn it into a cold stone fortress. The druids want to make it a sanctuary for the creatures of nature .. The choice seemed unimportant for Sigrund at that time but this choice would depend on his future allegiances ..

5 The Purple Emperor (Dwarves)
Alas, Sigrund's torments were not over. Relentlessly hunted down by the forces of the Purple Empire, Sigrund decided, after years of fleeing in the archipelago, to bring the war directly to the Empire's lands. Uniting all the peoples of the archipelago under his Ice Jewels, he landed at the head of an imposing army on the lands of the Empire. Sigrund would have to take the two evil dungeons on the Imperial Island before he could progress to the palace. The Emperor's dark knights stood against him and would leave him no respite.
Having chosen the dwarves, Sigrund could count on numerous material resources, formidable war machines and on the warlike rage of the dwarves. Unfortunately many of Nature's creatures had deserted its ranks and the druid curse still raged, devastating the crops and food reserves of the poor Sigrund.

5 The Purple Emperor (Druids)
Alas, Sigrund's torments were not over. Relentlessly hunted down by the forces of the Purple Empire, Sigrund decided, after years of fleeing in the archipelago, to bring the war directly to the Empire's lands. Uniting all the peoples of the archipelago under his Ice Jewels, he landed at the head of an imposing army on the lands of the Empire. Sigrund would have to take the two evil dungeons on the Imperial Island before he could progress to the palace. The Emperor's dark knights stood against him and would leave him no respite.
Having chosen the druids, Sigrund could count on large reserves of food due to the good weather, on powerful creatures of nature and on the devastating powers of druids. Unfortunately, the dwarves having turned their backs on Sigrund, his material resources were less and his choice of siege machine quite limited.

6 Look in the mirror.
The immense powers of the Crimson Emperor seemed to come from a Gigantic Mirror guarded in the heart of his dungeon. Sigrund advanced for the final fight into the depths of the dungeon. He was going to bring down the Emperor and take power. But as he threw down the weakened old man the Mirror seemed to speak to him.
The Mirror says: I see in you Sigrund, junk hero, liar, thief, murderer .. Your life is strewn with corpses. Just like my poor Emperor you will be a guest of choice and just like him you will be my slaves until your death.
As Sigrund's mind began to sink into darkness, Sigrund did one unexpected thing. Maybe it was the realization of all the harm he had caused, or just the survival instinct..
He shattered the Ice Jewels, the energy that filled him then enabled him to resist the Mirror. Unfortunately the Mirror was not defenseless, so was Sigrund's own reflection out of the Mirror, a reflection with a predatory grin and black eyes.
Sigrund barely had time to flee the dungeon as the ghosts of his past emerged from the Mirror like warped nightmares. Sigrund gathered his closest troops to launch a final assault to shatter the Mirror.

6 Look in the mirror-2
So Sigrund had conquered Evil. He was now a real hero, had this adventure really changed him? That only the future could tell us ...