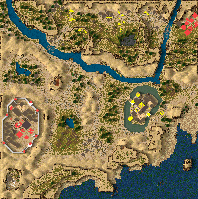 Campaign inspired of the Cid's campaigne of AOE
You incarnate Rordigue Diaz, The CId a knight who fight for the Spain's King. Fight perfidious king, greedy count and the terrible Balck Guard during the Reconquista.

And.. Sorry for English mistake..

Very good stranger, if you insist I will tell you the story of Valencia, I will tell you why a dead man haunts our streets on horseback. His name was Rodrigue Diaz ... The Cid, as the Moors and Christians call him. This name comes from the Arabic "sidi" which means "my lord" he is the greatest man who has ever lived. He was the servant of an old king of Spain. On his death the kingdom was divided between his two sons, Sanche and Alfonso. A hot summer afternoon "The Cid" was about to become King Sancho's new champion by defeating his champion in a duel.

The new overlord of The Cid, King Sanche, inherited from Castile an arid and windswept region which owes its name to the many castles that line its borders. The perfidious King Alfonso ruled Leon, but he openly conspired to become the ruler of all Christian Spain. Soon war starts between Castile and Leon. The conflict reached its paroxysm during the Battle of Golpejera, during which The Cid was tasked with capturing Alphonse. As the battle raged in the surrounding area, the Cid and a small siege force attempted an assault on the Alfonsoâ€™s fortress.

Although The Cid imposed defeat to Alfonso's army, the deceitful king knew some devious ways to achieve victory. He had Sanche assassinated during the night, over an meeting. This is how Alfonso VI becomes the King of Castile and Leon. The most powerful King of Christian Spain. The Cid had no confidence in this man but as he had taken an oath to always serve his king, he could not escape his duty. Jealous and suspicious of the popularity of the Cid, he repeatedly sent him into dangerous battles from which he always returned victorious. A political assassination had plunged the city of Toledo into a civil war. Seeing the opportunity to expand his empire, Alphonse attacked the city under the pretext of restoring order. The Cid was sent once more for this dangerous mission. The spies claimed that the Moors and Christians leaders were hidden in a tower not far from the cathedral.

EC4 A new master to serve

During the winter Alphonso sent the Cid into exile fearing his growing influence. The Cid did not stay alone for long. On his way many mercenaries and soldiers joined him and he soon found himself at the head of a small army. May he needed a castle and a lord to serve. His wish was soon to be granted. Al-Mu-Tamid, Moorish lord of Zaragoza ordered The Cid to defend his city against the Count of Barcelona, Berenger, a greedy lord who coveted the wealth of his city. The Cid arrived just in time with his forces to repel Berenger's assault and organize the defense of Zaragoza, already severely tested by the Count's continual raids. It was time for the Cid to lead the fierce Moorish defenders into battle.

King Alfonso, still wishing to expand his empire, ended up sending his own troops to fight the Moors of Al-Mu'tamid in Zaragoza. Although he wanted to come to the aid of his friend Al-Mu'tamid, the Cid could not bring himself to oppose King Alfonso, his legitimate overlord, to whom he had taken an oath. As he could not count on the Cid, Al-Mu'tamid had to seek help elsewhere. This is how he contacted the Berbers who lived on the other side of the Detroit from Gibraltar. Their leader, a masked Nizar named Youssef immediately prepared his troops to cross the sea with these desert warriors, the Black Guards. King Alfonso's army could never resist such a surge of enemies. The Cid must reach Alphonso's camp quickly in order to repel the invaders and destroy their camps.

EC6 The dead rider
After this victory which was costly for both camps and Youssef and his Black Guard were sent back to the sea. But history is often repeated and The Cid was quickly banished by the ungrateful King Alphonso. He found a shelter in Valence, of which he soon became the leader. He lived there for a while with his wife and daughters. Unfortunately his warlike past caught up with him. A few years later Valence was one of the first targets of the Black Guard's return. Al-Mu'tamid had long been exiled to the desert and King Alphonso refused to sacrifice his troops to participate in a fight who he considered lost in advance. Count Berenger did his best so that no nobleman in the kingdom could send reinforcements. The Cid was therefore alone.

He was mortally wounded during the first assault, so that his people did not lose hope, his wife stared at the corpse of Cid. As long as the illusion continued, the victory was possible. No enemy was to reach the body or all hope for Valencia would be lost.

EC7 Epilogue
The era of Moorish Spain has come to an end. Youssef and his Berbers had been defeated and Valencia had resisted the siege. King Alfonso attended the funeral of â€œThe Cidâ€. Not wanting to hear about the burial, he decided that the body of â€œThe Cidâ€ would be kept near the altar of the church. Subsequently, the wife of â€œThe Cidâ€, Chimene Diaz claimed the kingdom of her deceased husband. Valencia would now be free, for a while at least.