The objective for this mission is to capture the island in the middle of the river o­n the map, called Upwey. It has a reasonable number of troops o­n it so you'll need to build up at least a small army before taking it. To the north, there are two estates: Wintertop, which has iron ore deposits, and another estate with a bandit camp in it in the north-west corner. To the east, there are two estates: Scarcliffe and Tinhill, before you reach Upwey.

You will not be left alone to build your army as Sir William will relentlessly assault you. He will often send archers, catapults and fire ballistae to guard estates and attack your castle, sometimes backed up with swordsmen. You will need to have a castle capable of holding out against these attacks before you can take the fight to him.

First, the castle must be reconfigured. Delete all of the walls on the southern side, including the tower and gatehouse. Then delete all the walls west of the keep, including the gatehouse. Place a string of walls from the keep north until it hits the stream. Now, place the Lord's Kitchen, the Bedchamber and the Courthouse next to the Barracks in a line leading south. Make sure that they are all facing into the castle with their long stone walls matching to create the defence of the castle. Then extend the wall a few more tiles to the cliffs to secure the castle. This has the affect of walling in all of the farmlands to the north and all the lumber to the south.

Now buy about 200 wood, 10 stone, and 5 cloth (for the Lady to make dancing dresses) from the market. Place 12 woodcutters near the southern woods. Place 5 hunter's posts, four dairy farms and four apple farms near your granary. Change rations to "double" and alter the tax rate throughout the mission to keep your people happy. Place three hovels near the woodcutters. Put a tower-mounted mangonel in your only tower, and site three fletchers near the armoury. Place a guard post near the hovels and a torturer's guild as near the courthouse as possible and place a torturer's wheel and an execution block. Also site two wheat farms south west of the stockpile by the mountains. Add two gong pits & a two falconer's posts in the extra spaces of your castle.

As more wood and gold comes in, add three more fletchers and another gong pit. Since wheat should be coming in soon, place the mill by the stockpile and four bakeries between the stockpile and the granary. Also, squeeze into the southern area, an ell pond and two pig farms to support feasts. At any point during the mission, if you need more cash, you should find you're producing an excess of food. Sell any food type that is over 50. Buy extra royal foods to make the feast more grandiose, increasing the honor gained.

Constantly train archers as the bows are created. Place about a third of them on the Barracks and the rest in the tower.

Sir William will send some catapults to attack you now and then. Command your mangonel to aim near the estate border in the path of the enemy. Your archers should take care of the rest before they can do much damage.

At one point fairly early on, there will be a minor peasant revolt, and some peasants at your campfire will take up pitchforks and start to attack you. Just use your lord and archers to easily defeat them. When resources are present in great amounts, you'll want to place a joust at the western edge of the map. Remember to keep buying cloth as well for dresses.

Eventually Sir William will actually lay siege to your castle. The siege camp will be placed in either Wintertop or Scarcliffe, and his archers and swordsmen will march there. While they march, they'll be within bowshot of your castle, so you should be able to whittle them down. Use your archers and fire ballista to destroy the approaching catapults, and your pikemen to destroy the battering ram when it moves close to your gatehouse. This should be enough to hold off the assault.

Whenever you have over 1000 gold (sell excess food), and 250 honor (from dances and feasts) buy five swords and five suits of armor. Recruit 5 knights and use them to defend the castle during the siege 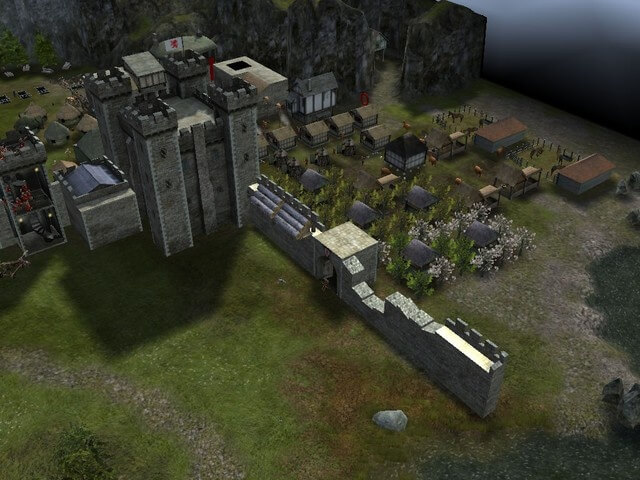 After the siege is lifted, place a couple of stables in the northern section of the castle. Also now place a gatehouse near the stream. Get your knights o­n horseback, and head north over the bridge to the north with 10 bowmen. Kill any of Sir William's men that are there and destroy the siege camp. Claim the estate for your own, and ride north and destroy the bandit camp. Your north border is now safe, and the estate can begin making iron and shipping it to your castle. Use this and the money generated from selling food to train up 20 knights. Give them all horses. Site the engineer's guild and build six or seven fire ballistae.

Get all of your knights back o­n horseback (they'll probably have lost some horses by now). Train some more knights, until you have around thirty gathered in Tinhill.

Then use the fire ballistae and knights to take the island by force. Mission complete!