Wolf Castle 3 commonly comes in two different strengths but for the purpose of this tutorial we will only focus on the first and easiest, the design I like to call Wolf Castle #3. This is arguably the most common Wolf castle next to Wolf Castle 11, it can vary greatly and if the average playerbase is low in any given parish this is the Wolf castle that usually appears. 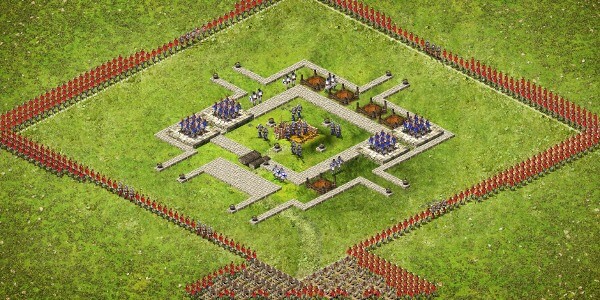 In this setup I placed the Catapults in the bottom-right corner to target them at the Keep. The vast majority will be outside the range of The Wolf’s garrisoned Archers and I also placed an extra 75 of my Archers around the Catapults to kill off The Wolf’s Sally Forth Knights and Swordsmen which are set to the aggressive stance. Set up three or four preliminary Pikemen behind the white line to trip the oil pots before your main force arrives, the majority of your Archers should be grouped around the manned enemy towers, extras complete the 360 encirclement. By the time my Archers remove all opposing forces my Catapults will have had plenty of time to clear an opening to The Wolf’s Keep.

Wolf Castle 4 is essentially Wolf Castle #3 with 9 additional Perimeter towers added at the white line, although these two designs share many similarities the attack setup is somewhat different. You should also expect greater unit losses (especially catapults) when removing it due to the additional garrisoned Archers around the perimeter.

In this setup I placed the Catapults in the bottom-right corner to target them near the Keep, I also placed my extra attacking Archers around the Catapults to kill off The Wolf’s Sally Forth Knights and clear out the enemy Archers in the Perimeter towers quickly.

Set up three or four preliminary Pikemen just behind the white line to trip the Oil Pots before your main force arrives; my Archers are concentrated around the Perimeter towers and my main melee force is placed in the southeast corner, this keeps them back until my Catapults and preliminary Pikemen have a chance to clear a path to the keep.