Although the term "Infernal Machine" is associated with any type of self-made device used in assassination or murder attempts (coined in 18th and 19th Century France), several examples stand out in the annals of Jistory. One such Device was invented by French Anarchist Giuseppe Marco Fleschi in 1835. An ardent "Anti-Royalist", he plotted to assassinate King Louis-Philippe I of France. In essence, The Device was an Organ Gun (a form of Volley weapon). Consisting of 25 iron Gun barrels, the weapon was roughly .69 caliber. It was loaded with Buck or Round Shot. The Assassin doubled loaded the barrels in such a way, as to fire a speculated 400 rounds. Mounted on a wooden Box Carriage, The Device was placed on a 2nd Floor window ( located in a building overlooking a known route to be used by The King).

Activated by a Slow Fuse, The Device was supposed to spray it's projectiles in a wide Arc (to maximize fatalities). "Insider" help gave The Plot an exact route The King would use on July 28, 1835 (when he was to attend a Military Review). Riding to the event in an escorted carriage, hundreds turned out along the streets of Paris. When The Device was activated, it malfunctioned. The spray of bullets were not properly "fixed" (range of limit), and the shots mostly went into the crowd. Many top ranking Military Officials accompanying The King were killed and wounded. The King was slightly injured.

Even Fleschi was wounded, when after igniting The Device, several barrels exploded prematurely. He lost several fingers answer was captured. He and several Conspirators would be tried and executed. Portions of The Infernal Machine were recovered and preserved  (by order of the King). Reconstructed (by and large), it still is displayed in The Museum of French History in Paris, France. 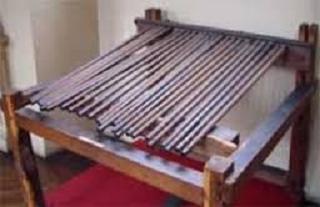