Mortesafe’s were devices that were created around 1816 and in wide used throughout The United Kingdom (England, Scotland, Ireland and Wales). They were created to combat the growing tide of Grave Robbery that was sweeping The Nation. The use of “recently” deceased Persons (dug up from their graves at times within hours), was a “growing” business. The remains would be sold to local Medical Universities for use by Medical Students in their dissection practices. Most Schools were not ignorant of this fact and they (like The Government) – turned a “blind eye”. Of course, getting caught exhuming a Corpse was nearly a Capital Crime in some cases, but no great effort was made to apprehend the Suspects. Some Villiages and Towns employed Night Watchmen, but in most cases – these could be bribed by enterprising Grave Robbers (also known as “Resurrection Men”). It was not until the sensational Case of William Burke and William Hare in Scotland in 1828, that a National outcry sparked “official” reaction.

The Mortesafe was seen as a viable form of protection for the recently deceased. Made of heavy iron slats, these were shaped in both squared and actual “coffin-shaped” patterns. They were secured by heavy iron and metal plated (set into the ground), and often secured to a temporary, above ground crypt (other times just the heavy plating alone). The Mortesafe “cage” was fastened to the plate by bolts, chains etc. Too heavy to lift by just several Suspects, the use of hammer and chisel would alert Police or Watchperson. For the most part, The Mortesafe was effective. In most cases, unless the deceased was wealthy and could afford his own, they were “rented out” by a Cemetery Authority for a period of 3-months. It was determined that a body was sufficiently decomposed by that time, so as to make it unusable by Medical Students.

The remains, after this Period, would be exhumed and reburied in a traditional grave (normally). In some cases however, even Mortesafe’s were broken into, leading to the construction of spiking and other “traps” such as the previously discussed “Cemetery Gun”. The use of Mortesafes stopped by the early 20th Century, with enforcement of much heavier penalties if one was caught desecrating a grave (especially for financial reward). 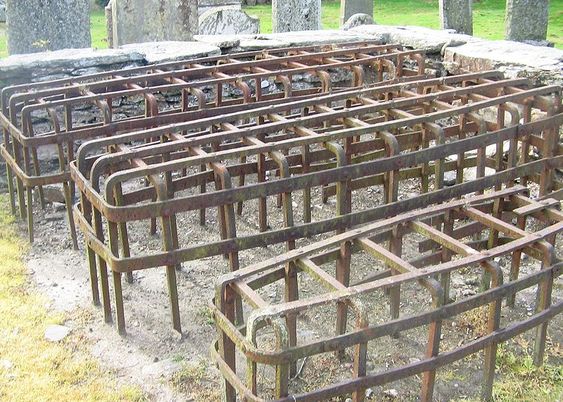