Although nothing "new" in terms of usage, Impalement goes back many thousands of years prior to The Middle Ages. This act is quite simply the penetration of the body by a foreign object (spear, pole, hook etc.). Generally used for treason or suppression of rebellions, there actually many different varieties of Impalement. Probably best known was "Longitudinal Impalement". First experimented on in The Middle Ages, the technique involved enhancing the natural opening of a victim's posterior (with a razor or knife). A wooden pole (no wider than an average man's arm), was next inserted into the "opening". The victim was then raised up. Slowly, (according to the victims body weight), they would slide down the pole - until the point exited either the head (brains) or chest (heart). It could take hours for a victim to die. In The Middle Ages of course, the most famous "event" involving impalement, come from the Wallachian  Prince Vlad III (aka Dracula). This was his preferred method of torture/execution against his Turkish enemies (earning him the name "The Impaler"). 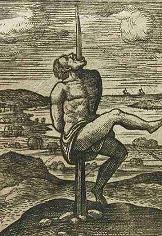