While some Historians stated the Female Heroine Boudica possibly never existed (or was at least an amalgamation of persons), others state that She was a very real person, that became a Cultural Icon of English History. Boudica was born into The Iceni Tribe of North Eastern England – possibly around 20 AD. Debate rises of Her Nobility within The Tribe, but most cite She was of ''Royal'' Blood. This allowed Her to marry The King Prasutagus. Boudica bore Him several Daughters. Of the (later) descriptions of Her (contemporary and Roman mostly), Boudica was said to be ''beautiful and highly intelligent'' (for a Woman of Her Era).

When Rome began The Conquest of England, most Tribes that were not outright destroyed in battle were annexed as Roman Provinces. The Iceni resisted and as a result, King Prasutagus was murdered by (possible) Roman Assassins. History states Boudica and Her Children were raped (with The Daughters possibly killed after, according to some versions). This so lionized Boudica against Rome, She would become something seldom (if ever seen) – in Her time. She would become General and Leader of not only The Iceni, but a beacon for other displaced Tribes wishing to fight against a ''Pax Romanus''.

In 60 AD, Boudica and Her ''Army'' (which at times reached numbers such as 20,000 effectives), launched several highly disciplined Campaigns against Roman Towns established in Britain. Of the three targeted settlements, Londinium (today's London), was attacked. History records 80,000 such Legionnaires were slaughtered by Boudica. and Her Army.

Becoming a Heroine of Resistance to many, Boudica would become ''Public Enemy Number 1'' to Rome. Her Military Campaigns would become so successful, that even The Emperor Nero debated on withdrawing from Britain rather than lose more of His Colonial Forces. However, Roman Forces proved too much for Boudica and Her Forces. Rome began to burn crops and supply based Villages friendly to Her, thus causing The War to become one of attrition for Boudica. Within 1 year (61 AD), She found Herself commanding an Army of possibly 10,000 (even less by some accounts. With a sizable Roman Force of 50,000 soldiers closing in, Boudica was said to have committed suicide, rather than risk being captured and taken to Rome (for public torture). Some Historian even cite that Boudica may have been poisoned by Her own jealous Lords, who had taken bribes by Rome.

With much of Her life becoming Legend, it was many Centuries later (19th Century Victorian England), that gave birth to the more traditional myth of Boudica. A ''Red Haired Beauty of incomparable intelligence and wit'', She would served as a template very different from what Women were thought of (or even looked at), during the rather oppressive Victorian Era, by Men. Nonetheless, Boudica still resonates as an important early Mater of England character to this day. 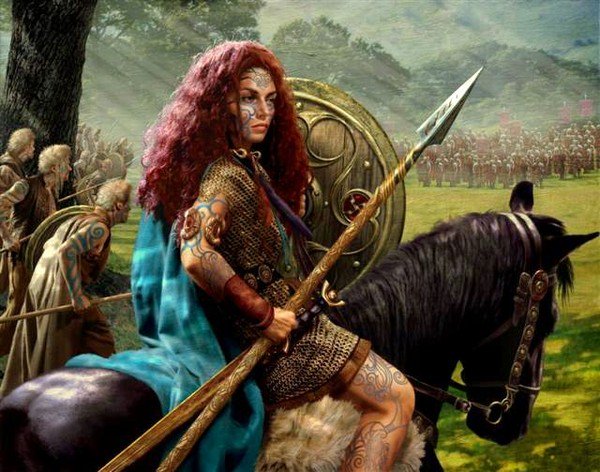