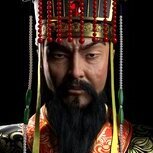 Stronghold Crusader AI design contest until the end of October 2019