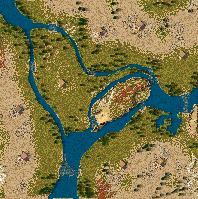 This is edited The Host map. I have removed all of the outposts, some keeps I moved just a little bit, while one from the island I moved to the southern coast of the river. I also added iron for two lords in the west. The idea was the three lords in the north to fight the other five. The fight is going to be really hard as they are on the poor side of the river, where only some stone can be found. On the other hand, they do have plenty of wood there, and enough oasis, so it's that they don't have a chance.

Note: This map was created with Stronghold Crusader Extreme.

The map is a nice map. It's not too easy, not too hard. It's fairly textured and although unbalanced, at the same time it's rather equal for any player.

There is a nice amount of oasis, but quite far away from where one would place their granary. At the same time this makes the map more fun and slightly more difficult for all players.

Thanks, Mathew, I'm glad you like the map. I do realize what you said about oasis, but on the other hand, that is just what I wanted. I wanted players to fight for oasis, and to fight to protect their farms.

I also think we would have a lot of fun playing this map, and that it could be challenging. :)

By the way, if you want to rate the map, you can make a review. I would also tell one more time, that this map is not entirely mine - this is edited The Host map, which is one of the original Stronghold Crusader Extreme maps. I mean, feel free to give me some lower rating for creativity, if you want. :)