This mission you are defending Wartburg Castle. You will instantly see that this is a much large Castle than those you have been defending in the past, and you do not have a lot of troops to defend it with, in comparison to an enemy army which seems much bigger than your own.

Start by moving over to your second Gatehouse, and moving all your troops over to the first Gatehouse. This will allow you to attack the enemy army more at the start of the map which will prove much more than than having small forces scattered around the map. Do the same with your troops in the rand-hand Tower in the same section- move them to the Tower next to the first Gatehouse instead, which will increase your fire power. Move your Spearmen next to the Pikemen in the courtyard, and you have prepared your first wall just about as best as you can for the onslaught coming.

While you have done this, prepare the second stage of your defence. Head over to the fifth Gatehouse, and move all your troops from there and the nearby connecting wall over to the Main Gate (third Gatehouse). This will provide covering fire when your troops eventually retreat out of your first Gatehouse. Now, move back to your first Gatehouse again, and wait for the correct moment to unleash your rolling logs onto the enemy. Timing is vital on this one, so wait until the troops are almost on top of you- this could take a few moments.

When the Catapults start moving forward, remember that you can't possibly destroy them all. It's of far more use (and importance) to focus on killing the enemy Archers that are stationed on the nearby cliff edge. Most of these can't reach your own Archers anyway, which makes this very easy to kill a large number of them quickly. However, be careful as they will eventually attack your rolling logs and destroy that area of wall- so make sure you activate them first. 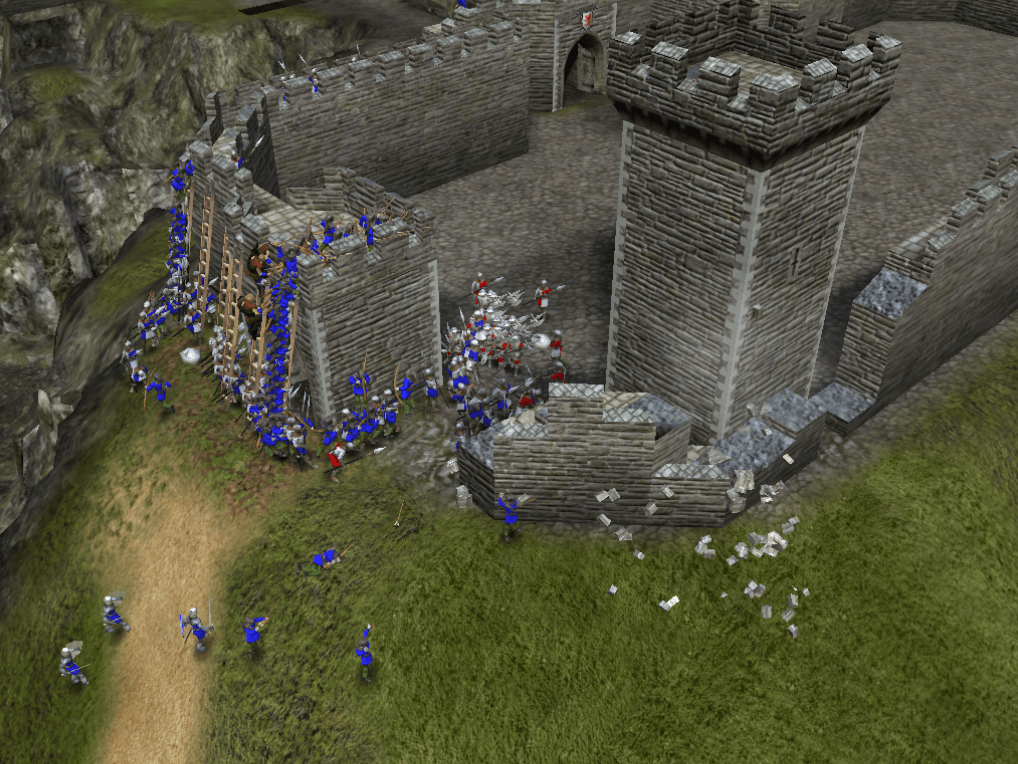 As you will see, your initial wall will very quickly be overpowered. The most important thing is to save your ranged troops. Retreat them back to your Main Gate, which you must now make your main point of defence. Keep your Pikemen and Spearmen in place attacking any enemy units who breach your walls. They will only last for a short time, but it should be enough to hold the enemy in place, and to allow your Archers to escape.

Start now by moving your Pikemen outside of the third Gatehouse inside next to your existing units in the courtyard. The attack on this gatehouse will come swiftly, and you need to control it fast. Station some Archers on your walls around the Gatehouse, because you will probably find that no matter how hard you try, Laddermen will get through, and will place Ladders on your walls. The Archers stationed on your walls will knock down the Ladders before enemy units can climb up them. Once this has happened, the enemy units below are sitting ducks- so using your Archers on the Gatehouse, activate one or more pitch ditches below. 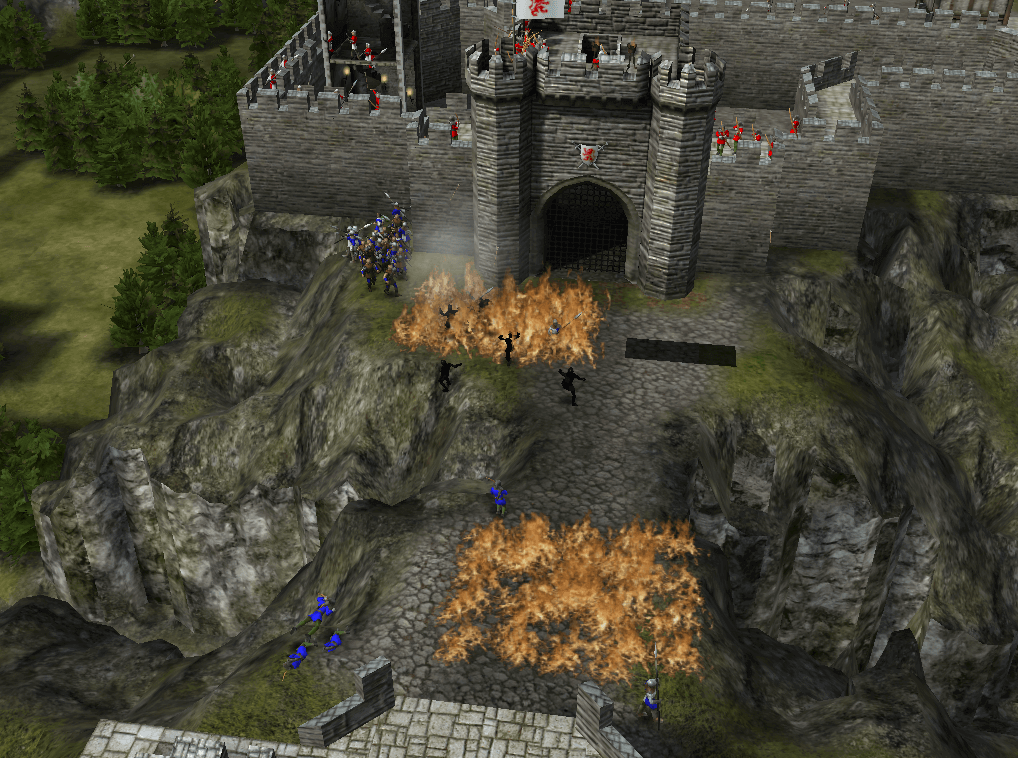 Enemy Laddermen will return again, but by this point you've probably already killed a great deal of enemy units so the threat is no longer as large. It may help at this point if you station some Spearmen on the walls to defend against any units which manage to climb up any ladders. Before this happens however, rush your Archers off the Main Gatehouse, and onto the Gatehouse behind it. Station your Pikemen in the courtyard below next to the bottom of the nearby Tower- this will help them to kill off any attacking units from the Towers trying to reach the ground, but also keep a defensive position for when the Battering Ram eventually destroys your Gatehouse.

Once this happens, more Laddermen will rush through so prepare in advance, and bring your Archers down to the courtyard from your walls. Unless there's an immediate threat by the remaining Sowrdsmen being very close, don't move them to your final Gatehouse next to your Keep yet. They can do significant damage in just taking care of all the siege equipment and Laddermen still on the loose, and with your Pikemen to defend them, this can achieve a great deal. Once the enemy Swordsmen get close enough to do any melee damage, retreat all of your Archers to the final Gatehouse in your Castle. Move all your Pikemen (including those in the small ally) to where the remaining Spearmen are in your castle.

Now things are just a waiting game. If you've managed to get rid of the enemy Catapults by now, this will make things a lot easier for you. Either way, strengthen your defence- move the 7 Archers out of the Great Tower to the north east of your Keep, and place them on top of your Keep. Further reinforce the Towers in your Keep now by moving all the Archers from the northern Towers into your southern ones. Eventually the enemy will breach through your defences (probably by destroying some of the wall by your Lord's Kitchen). Once this has been done, if it is safe to do so send through some Spearmen to destroy any remaining Catapults. Now, retreat all melee units back inside your final Gatehouse to your Keep, and wait for the remaining units to march forward. 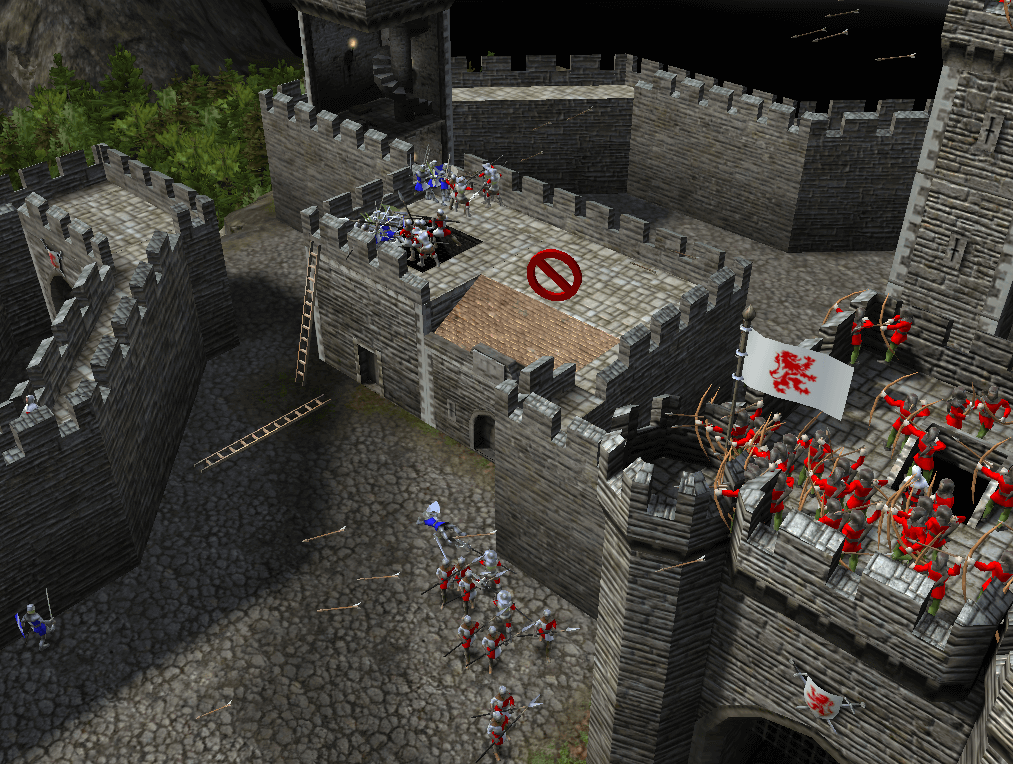 Using the same tactic of stationing melee units on your walls to push off the ladders will help here. By this point, the enemy should be so weary, you have almost entirely annihilated them. If you need to, retreat one final time into your Keep, although this probably shouldn't be necessary anymore. Waiting jsut a few moments will destroy any remaining enemy force, and victory is yours!

You can get your saved game from this mission here in the downloads section.